Home » The Lost City Of Boston 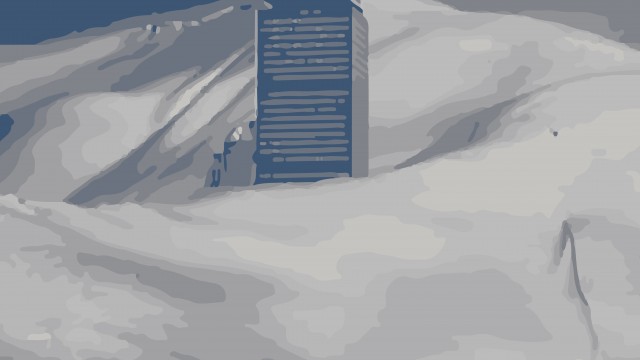 The Lost City Of Boston

Boston is a city iced over, soon to be lost beneath the snow.

Governor Charlie Baker and Mayor Martin J. Walsh, WCAS ’09, will do the best that they can to pacify and contain the chaos, the riots in the streets and the runs on the banks, but they’ll both ultimately flee, too. Charlestown will succeed and close its borders off, claiming it is more capable of clearing the snow away and keeping the power on. People will keep arguing about Boston 2024. Generations will pass and all remains of the once great, youthful urban landscape will be nonexistent beneath a blanket of white—people will struggle to piece together how everything fell so far, so fast.

Should a chronicle of the final days be put together, early records will show the complete abandonment and collapse of the MBTA as a catalyst for the apocalypse. As the MBTA collapses under the weight of its own remarkable, billions of dollars worth of debt, and shoddy finger-pointing by the people running it and the people funding it, so too will collapse hundreds of thousands of privately owned businesses, and this very University.

Boston College prides itself on its dedication to service—you can’t walk around during the tour without having this fact crammed down your throat, and I mean that in the best way. Over half of recent graduating classes have been engaged in some form of community service. That’s a damn good thing to brag about. The number of engaged, energetic college kids 4Boston and PULSE ship off into the city week after week keeps many organizations afloat. Students aren’t afraid to scrape their knees up and bruise a knuckle or two, metaphorically speaking. That’s what non-for-profits look for in their volunteers.

A student volunteer acquires the latter part of that title by way of the T—the path in. The T is more than just a form of transportation, but a play of sorts, and if the student volunteer rides the T enough times at the same times, the play takes fuller and fuller shape. On the early morning T rides I take to get into the city, the same people always sit or stand in the same spots—they always say good morning to each other in English, and have side conversations in any language but. It’s hard to imagine exactly how many different places they go, all these people. Up and down the B-Line, across the heart of Boston in Back Bay and the North End, maybe even as far as the East End. The Atlas’ of this city, waking up and getting out far before most alarms go off, start their days rocking and bouncing forward on the city’s famous and infamous piece of public transportation.

The snowfall is at about 79 inches according to The Boston Globe, and soon it will breach the previous record of 107 inches of snowfall, and continue to move upwards through the hundreds as Boston is buried. Modern generations will find it hysterical looking back at the MBTA and the T, because its failure will not be concerned with whose fault it actually is, or the debt anchored to its ankle, pulling it down deep. History doesn’t care for these banal explanations. Modern generations will just see pictures of empty T platforms, trolleys sitting hauntingly empty, the doors left ajar for the people that have given up on it. When the T shuts down, it effectively shuts down the city.

No one wants to put faith in a system that insane and that unreliable, so the only viable option is to fix it. A recent development that looks as if it’s playing out in favor of the T has been the $2 billion Green Line extension, with $1 billion of funding coming in from the federal government. This errant miscalculation will be forgotten when Boston goes under, too, but it’s worth thinking about while the city’s seams hold together: you can’t fix a car with a busted engine by giving it a shiny new wheel.

Walking through the city last Tuesday, getting back to the T after my time serving at a soup kitchen, the city streets were unrecognizable. Banks 10 feet high needed to be climbed to get from street to sidewalk back to street. Traffic was squeezed down to one lane, and it was hiccupping along at a nonexistent pace. Snow was still falling. Feels like the end of the world, I heard a heard a disgruntled man who walked past me mutter.

When I finally got to the T station, there was a single man—dressed in bright orange and yellow—at the bottom of the steps acting as the gate-keeper to the unparalleled nerve that runs through Boston, nonchalantly waving off the crowd of people I was included in.

“No outbound service today” he said.