Home » Closing The Gap: Douglas Gautraud And The Craft Of Art 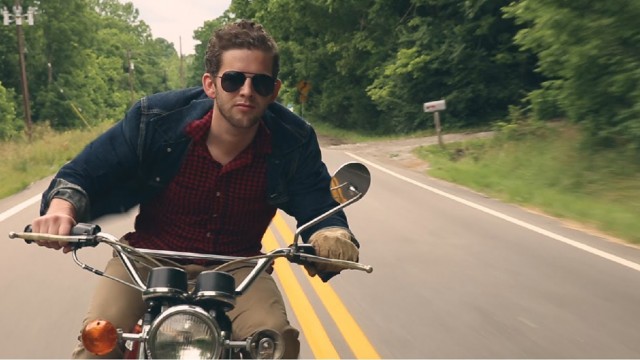 Closing The Gap: Douglas Gautraud And The Craft Of Art

An artist is an addict to the story. An artist wants to move you, spark something deep. An artist knows that there is something to say, but it never comes out in the right way. Maybe the words on the page or the notes in the song just don’t meet the ear the same way they roar in that artist’s brain. Ira Glass points this out in his famous speech on The Gap, saying that, “For the first couple years you make stuff, it’s just not that good. It’s trying to be good, it has potential, but it’s not … A lot of people never get past this phase, they quit.” So you strap in, hunch over, and work. Clap the hands together and let the chalk rise. And this idea, the one that says that the artist is made, not born, is encapsulated in Douglas Gautraud.

Douglas Gautraud manages to be both the kind of guy you would want to have a couple careless beers with, and the kind of guy you would want to circumnavigate the globe with. Gautraud is equal parts genial and contemplative—his views on creativity, authenticity, and hard-work demand a conversation that stretches far into the night—but also evokes a sense of adventure and fearlessness—a desire for the tangible things in life. If Gautraud had an extra one-way plane ticket to somewhere ridiculous, I would be scrambling to pull a bag together.

Gautraud’s battle isn’t with the hackneyed, uninspired work of others artists’ work, but for the honesty in his. This battle came center stage when he released “My Mother’s Motorcycle” on YouTube a little under a year ago. The video, as Gautraud says, “is the first thing I made that I was very proud of.”

But, even as he says this, his voice is absent of all vanity, full instead with a very quiet confidence that some might confuse with shyness. The video has garnered over a million views, and for a story that is so simple, and builds so obviously and linearly, it still manages to have that endlessly watchable charm. In the video, Gautraud talks about how his mother came to own a motorcycle, using his two grandfathers as the jumping off point, and through this simple story,  Gautraud gets to the core of a lot of the big questions, like why we attribute such sentimental value to material goods. As much as materialism destroys us, it comes to define us, and the things we own say so much about who we are. Even more than that, who we are comes to define the things we own; materialism is a circle.

Older things seem so much more tangible and authentic compared to newer things. Gautraud sees it as a question of character—he compares buying a plastic chair from Walmart to buying a wooden chair from a craftsman. “They’re both chairs,” Gautraud says. “But, you know, the wooden chair is a better chair.”

There is something more true in the splinters and sweat that has to be put in to make that wooden chair—the character. Typewriters, record players, homemade sweaters and craft beer all have this draw to them. In a more literal sense, they are there in front of you, available at the touch the way things on the Internet may not be, but it’s also the fact that someone out there really cares about this product that makes us care about the product.

This really has nothing to do with the older origins of these  products come from, although many might think that. Nobody fifty years ago was drinking craft beer. “My grandfathers probably drank only Budweiser,” Gautraud says, laughing.

And he’s right. The counter-culture drive for what’s commonly referred to as hipster is really a drive for material goods to have some place in our lives, not existing as just fake realities. We want things to compliment us, not for us to live through. Remember: what we own says a lot about who we are, and who we are says a lot about the things we own.

But to say that’s the only point of Gautraud’s video would be doing it injustice. Go watch it, if you haven’t already.

“I kept just wanting to make something, and it always looked bad,” Gautraud joked about his earlier work in film. For a guy that never took a film class, he feels that he has, “learned from necessity,” spending copious amounts of time working under, over, and through ideas to make sure they’re honest and true. He’s not the kind of person to sit quietly—he believes in talking the ideas out, bringing them to intelligent friends to look over. Gautraud doesn’t push forward unless things look promising. “Why bother polishing something if it isn’t any good?”’

He’s a filmmaker (anyone who grows up on Alfred Hitchcock films is destined to be labeled as such, consequently) but film isn’t his only source. “For me personally, I’m interested in a lot of creative endeavors … mathematicians, physicists, graphic designers.”

If there had to be a single explanation for Gautraud’s distinctive style and voice, it’s that simultaneously simple and ingenious idea: one needs to develop an intimate understanding of many different worlds of artistic craft. “I really don’t think it’s mystical, creativity,” Gautraud says. “I really think it’s the same things as becoming an engineer.”

As for his future personal work, Gautraud is surprised when I bring up a project that he mentioned in an interview with Music Bed, in which he says, “I want to make a video about why beautiful things are so closely related to painful things.” Gautraud has been making commercials for Nikon since the attention garnered from “My Mother’s Motorcycle”—working with bigger budgets than the $400  he shelled out for the YouTube video—and it sounds like he hasn’t had much time to devote to personal endeavors, but my thought is that that idea is still working back there, percolating in the recesses of his mind. He’ll sit on it until both he and the idea is ready, it will most certainly be something worth watching.

Gautraud finds it super important to have heroes and role models, and I can’t help but feeling that he has become one of mine. It’s not about showy gimmicks or clever distractions for Gautraud, but hard, nose to the grindstone work—biting the bullet knowing the teeth might shatter, closing that gap that Ira Glass so famously talks about. It’s also about modesty, the whole way through. “You just have to do the work,” Gautraud says. “And then keep doing more work. People will find the work appealing from the work put in.”