Chris Shaw turned on the knee-high pitch, blasting a line-shot out to right field. The ball rocketed over the right fielder, who turned and ran back to the track, but never had a chance. Most fans in the bleachers of Alex Box Stadium could only swivel their heads in awe as the ball rapidly cleared all but one row.

Shaw jogged around the bases as the left field scoreboard reflected his home run, boosting Boston College baseball (2-5) to two runs and five hits. Unfortunately, Eagles’ supporters could only celebrate so much. This was just the second run in seven-plus innings for the Eagles, while No. 4 Louisiana State University (6-1) had already scored in every inning but one, good for 11 runs and 16 hits.

LSU would tag on another five runs and five hits in the bottom of the frame, completing a 16-2 rout of BC to sweep the three-game series.

Fortunately for BC, the performances in this game weren’t indicative of the entire series. In the two games on Friday, which became a doubleheader day once forecasts for heavy rain on Sunday forced the finale to be rescheduled, the Eagles played with the top-five team.

They got out to an early start in game one, as Gabriel Hernandez and Blake Butera put together back-to-back singles. After a Joe Cronin struck out and both runners moved into scoring position on a throwing error, Shaw came through, driving a single up the middle to plate both runners.

The Eagles added another run in the fourth, as Michael Strem had an RBI single to drive in Cronin.
BC starter John Gorman couldn’t hold either lead the Eagles took, allowing two runs in the second and two more in the fourth, the latter of which would prove to be the difference. Mike King came in to relieve Gorman, who couldn’t make it through the fifth. King quickly got LSU to line out for the final out.

King threw another two innings for BC, in which his only real mistake was allowing a solo shot to Danny Zardon. Two more runs crossed in his latter inning of relief, though both were unearned—the products of a throwing error and an obstruction call—and BC fell, 8-3.

King has lead BC’s bullpen so far in this young season, posting a 1.96 ERA and a .173 opponent batting average. Beyond him, the team is still looking for guys to get outs.

Freshman Carmen Giampetruzzi, who has yet to allow a hit or run in three appearances totalling an inning and a third, is the only other BC reliever to have pitched at least one inning and have an ERA under 6.75.

To be fair, the 16 runs allowed on Saturday inflated these statistics. In many ways, the game in general was one to be forgotten. The Eagles never led, needing eight different pitchers to get 24 outs in the LSU lineup. Head coach Mike Gambino pointed out how such a tough loss could help the team in the future.

“From the moment we got to the park, we didn’t quite have the focus that we needed,” Gambino said. “We’re so close to being really, really good. Without that focus, we’re close to being able to get rolled like that. It’s a really good lesson as we get going and it’s something to build on.”

The Eagles should focus on building up their pitching, which has yet to live up to the strong performances in the lineup. After two weekends, the team’s overall ERA is higher than the number of games it has played: 7.93.

No matter how many home runs Shaw hits this season to pace the offense, the Eagles can’t win unless the rotation steps up and finds ways to keep more runs off the board. 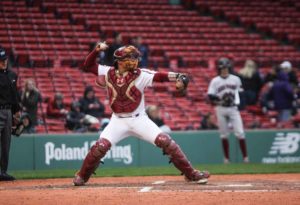