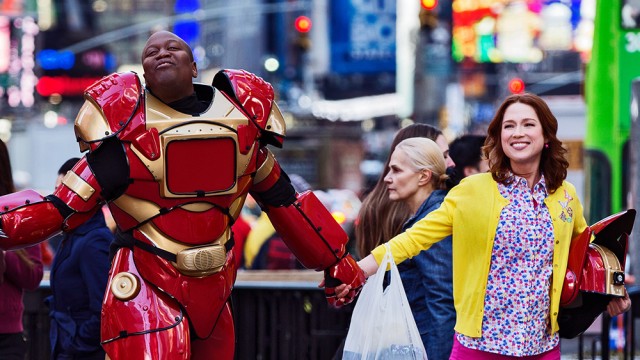 While everyone else was busy binge-watching the newest season of House of Cards last week, Netflix released its second original comedy series on Mar. 6 to initial praise and later criticism of its racial politics. Unbreakable Kimmy Schmidt was initially designed for NBC and ordered from producers Tina Fey and Robert Carlock, the writers behind NBC’s 30 Rock. The series was ultimately given a two season order on Netflix and is the first Netflix original series specifically written, cast, and shot for prime time television. Kimmy Schmidt is far from a sleeper hit, earning critical praise not only for its quick-witted and edgy writing characteristic of Fey, but the diversity of its leading cast.

The eponymous Kimmy Schmidt (Ellie Kemper) is a young woman recently rescued from an underground bunker in Indiana, where she was held captive for the past 15 years at the hands of a charismatic cult leader (Jon Hamm). Beyond the show’s controversial premise, we watch as Kimmy decides to start her life over as a 29-year-old woman living in New York City and—despite the pitfalls of only having a middle school education—Schmidt is resilient and unbreakable (and “females are strong as hell.”)

Featuring smart writing and unconventional themes, Kimmy Schmidt was met with initial praise for the diversity of its leading actors. Kimmy’s roommate, Titus Andromedon (Tituss Burgess) is a gay, black, aspiring actor who teaches Kimmy the ropes of living in New York City while struggling to make his big break in Broadway. Titus is not written as a stock character or a token black sidekick to Kimmy’s overzealous hijinks, but is a fleshed-out character all on his own. We watch as Titus struggles to overcome his typecast as a gay black actor and eventually skyrockets to infamy in a viral video.

Another character, Dong Nguyen (Ki Hong Lee), serves as Kimmy’s central romantic interest after meeting in GED class. The interracial couple is not stigmatized or shrouded in racial stereotypes, but Dong and Kimmy are portrayed as compatible in terms of personality, interests, and humor. While Asian men are often depicted as effeminate or asexual in mainstream media, Dong is a developed character who falls for Kimmy based on mutual physical attraction and bonding as outsiders to the city (Kimmy as the ‘Indiana Mole Woman’ and Dong as an undocumented Vietnamese immigrant.)

While Kemper’s infectious optimism may give the show a light-hearted tone, Kimmy Schmidt is rooted in darker and controversial themes. The series chronicles a woman readjusting to life in the 21st century after being kidnapped by a doomsday cult leader. We watch as Kimmy works to secure a job, grapples with PTSD, portrays signs of previous sexual abuse, and acclimates to her new life in the city. The show never shies away from realistic depictions of racism, homophobia, sexism, and classism, but rather uses comedy to bring them to new light. In one scene, we watch as Titus realizes that he is treated better dressed as a werewolf than as a regular African-American man, showcasing the real issue of how race is treated in today’s society. Fey’s tongue-in-cheek writing utilizes comedy to showcase the problems with systemic sexism, racism, and homophobia by portraying the bigots as foolish—all without coming across as overly didactic.

Not all reception to the series has been positive, however. In an article for Vulture, the series has been criticized for its depiction of Kimmy’s wealthy boss, Jacqueline Voorhees (Jane Krakowski) as a Lakota woman passing as white. Slated for catering to Native-American stereotypes and cross-racial casting a white actress as a Lakota woman, Fey explains that she hired writers of Native-American descent and two Native-American actors (Sheri Foster and Gil Birmingham) to portray Jacqueline’s parents in order to promote diverse representation. And while Fey’s decision to cast a white actress as a Lakota woman has raised some brows, the portrayal of Jacqueline as a bratty teenager desperate to acclimate to white American culture highlights the absurdities of abandoning one’s culture.

Beyond its quirky premise, Unbreakable Kimmy Schmidt makes strides in terms of racial, gender, sexuality representation uncharacteristic of typical NBC or prime time shows. Fey’s writing is so jam-packed with popular culture references and tongue-in-cheek humor that a second watch is needed to catch every joke. The comedy series, written in 22-minute episode format, is a show streamlined for Netflix and made perfect for binge-watching, providing much-needed reprieve from House of Cards fatigue and Frank Underwood’s tiresome monologues.