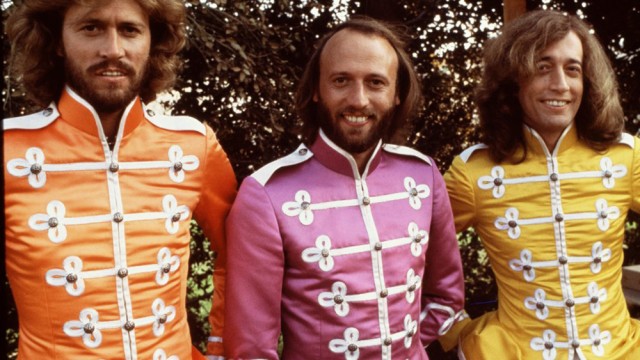 The other night, my friends and I were watching The Beatles-centric romantic musical, Across The Universe. As far as musicals go, this one ranks among the highest in my opinion—however, it did bring to mind another Beatles musical that I hold dear to my heart.

Back in 1978, a magical occurrence transformed cinematic history. Together with Peter Frampton, the Bee Gees starred in a musical very similar to Across The Universe called Sgt. Pepper’s Lonely Hearts Club Band. While Across The Universe was much more seriously toned and thematic, Sgt. Pepper’s Lonely Hearts Club Band was an otherwise silent musical that followed the shenanigans of the titular band, Mean Mr. Mustard, and Maxwell and his Silver Hammer. Sgt. Pepper’s is wrought with Beatles references and Bee Gees covers, along with appearances from Steve Martin, Aerosmith, and Alice Cooper. It might be hard to find a copy, but any Beatles or Bee Gees fan would surely go to the effort to track down a download of this incredible mash-up.

When I suggested to my friends that we abandon Across The Universe and put on the Bee Gees film instead, they were puzzled by what I have just described to them. The Bee Gees had done a whole Beatles musical? How could this be? How had they never heard of this little note etched in pop-culture history?

With today’s almost complete accessibility to media from the last five decades, it was easy to track down a digital download of Sgt. Pepper’s in minutes and share it in all of its glory with a few friends of mine. Now, with just a quick flash of my memory, five or six people were introduced to a small facet of culture that they otherwise probably wouldn’t have been able to see. Sure, if this were a decade ago, they could have hunted down a copy on tape or DVD, but who would’ve gone to that effort just to satisfy my disco ramblings?

This is one of the beauties of the Internet Age: a user can easily track down some of the most obscure references and media that come to mind in an instant. We’ve all consumed so much media in our lives too, that some of the most enigmatic TV shows or movies still have secret and devoted followings.

Look at Star Wars for example. Fans are familiar with the six theatrical films as well as with the several video games and TV shows that the series has inspired. The popular Star Wars: The Clone Wars series had been running on Cartoon Network for several years before it was put up on Netflix, where it has settled comfortably to be binge-watched by fans, but there was once another Clone Wars cartoon that is much more highly praised by those that remember it. This Clone Wars cartoon can be found with a quick search on Youtube, in its entirety for free.

Another little hidden gem of Star Wars fandom that would have been a major pain to track down before the age of the Internet is the atrocious Star Wars Holiday Special. Also made in 1978, CBS aired a Holiday Special based on the concept that Chewbacca was trying to get back to his home and family for Life Day, the galaxy’s Christmas. George Lucas tried to do just about all in his power to erase all traces of this monstrous two-hour scar on the franchise, but thanks to the Internet (and the ability to transfer bootleg tapes to a computer) fans of all generations have a chance to bear through the entirety of this eyesore.

Fans of Toy Story may remember the backstory of Buzz Lightyear and his intergalactic conflict with the evil Emperor Zurg, but how many of them remember the Disney Channel cartoon Buzz Lightyear of Star Command? If you’re a fan of Toy Story, simply search that title, and you come across episodes of the rather impressive spin off series.

Youtube and torrenting provide us with a landscape of entertainment that would have been unimaginable just over a decade ago. Whether it be a Bee Gees musical or a quirky Leonard Nimoy music video, nothing seems impossible to find these days. From late ’90s and early 2000s kids shows and cartoons to underrated masterpieces of ’60s and ’70s, practically anything can be found just with the right search word.

A decade ago, it would have taken a more than proficient techie to track down and download what practically anyone with a computer can find these days. Today, it seems that we are right in the heart of a digital wild, wild west.