Home » ‘Own It’ Brand Finds Place At BC With First Summit 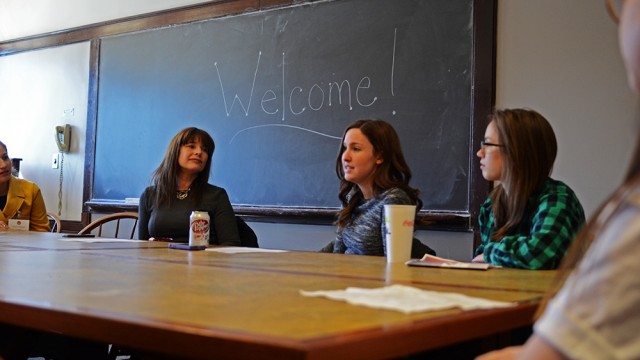 ‘Own It’ Brand Finds Place At BC With First Summit

“This event is truly going to be a game changer,” Barbara Jones, vice president of student affairs, said Sunday morning before a crowded Robsham Theater.

With this, Jones formally set into motion the Boston College Women’s Summit: Own It, a daylong event co-sponsored by Boston College Women in Business and the Undergraduate Government of Boston College (UGBC) that aimed to “bridge the gap between female leaders of the 21st century and the millennials who admire them, by shaking up the women’s leadership arena and producing accessible events for college-age women.”

“You are in for an exceptional day,” Jones said. “A day where you get to learn from each other and from people who have been out in the field and working professionally. This will be an event that you will remember for a very long time, and the lessons that you learn and the inspiration that you derive will be incalculable for your future.”

The day began with registration at 8:15 a.m. and ran until closing remarks at 4:30 p.m. The full schedule of events included panels featuring distinguished BC alumni and guests with expertise in politics, the sciences, media, and business, along with 21 different breakout sessions addressing a wide array of professional and women’s issues, and two keynote speeches from high-profile speakers Carrie Rich, CEO and founder of The Global Good Fund, and Kate White, former editor-in-chief of Cosmopolitan magazine.

Behind this year’s Own It Summit stands a team of over 30 students that, according to event co-chair Alexis Teixeira, CSOM ’17, was assembled in December and has been hard at work for a large part of the year, particularly in the realm of outreach in an effort to attract an enthusiastic collection of alumni and guest speakers.

“UGBC and Women in Business contributed financially, for the most part and the rest of the organizations contributed in either financial or publicity efforts,” Teixeira said. “We developed a very extensive email list and figured, ‘Whats the worst that can happen?’ So we got a lot of ‘no’s’ but also got a lot of ‘yes’s.’”

Teixeira also feels that the outreach efforts of the Own It team were bolstered by the legitimacy of the Own It “brand” and its growing presence on college campuses across the country.

Following the guidance of the founders of the Own It Summit at Georgetown University, BC is the second university to formally host an Own It Summit of its own, with Notre Dame and Washington University in St. Louis looking to hold inaugural summits in the near future.

“BC alumni were also extremely willing to help out and participate,” said Lily Peng, event co-chair and A&S ’17. “We reached out to the Council of Women for Boston College and basically every alumni we reached out to said they would love to come back and help in any capacity.”

In addition to this assistance from an extensive alumni network of professional women, Teixeira and Peng also cited the assistance of a faculty advisory committee in providing critical and insightful feedback from outside of the Own It team.

“UGBC had a Summit last year that they put on, and after the summit I came away with a lot of positives and a lot of improvements that I saw could be made,” Teixeira said.

Aside from the dramatic increase in attendance, some notable differences between this year and last year’s conferences include male involvement and accessibility for all students regardless of career interest. Teixeira noted an increase in accessibility for students regardless of their professional intentions, unlike the previous year’s summit, which largely pertained to careers in business and finance. The 2015 Own It Summit featured a larger breadth of topics and featured speakers with experience in a much broader spectrum of vocations, focusing on producing relationships more “organically.”

“Today, all students, not just females, were invited here to participate in this conversation,” Teixeira said. “It is time for the conversation to change from ‘What if?’ to ‘What next?’ How can we move forward and make our goals a reality? We can start, today, by owning it.”

Given the substantial growth of the event from last year and the success of the program this year, Teixeira and Peng, both sophomores with two foreseeable Own It Summits ahead of them, feel that going forward, the possibilities are “endless.”

“With the student support and the administration support, anything is possible,” Teixeira said. “They really believe in this event and they have been nothing but helpful and I think that this can be as big as we want it to be.”

When asked about where they intend to take Own It 2016, event Executive Director Caela McCann A&S ’15 jumped in with an appropriately ambitious response.