Home » Are You Not Entertained? 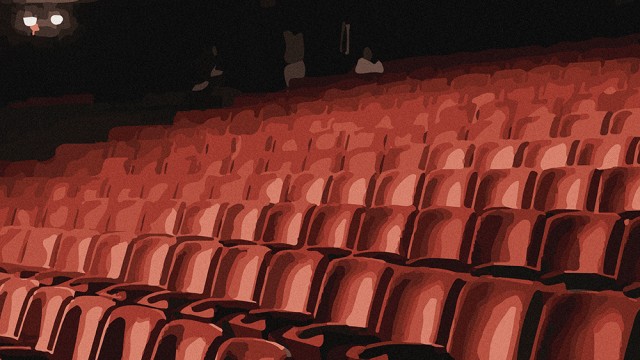 Are You Not Entertained?

My dad and I have found a sort of tradition in going to the movies together.

After dinner we get in the car and drive for 15 minutes in the meditative hum of the indistinguishable radio. We enter the theater, laying down inordinate stacks on moats of soft drink and hills of popcorn, movie popcorn, the undisputed premier of all the popcorns (save it, Orville 97 percent fat free). Thoughtlessly, we sink back into the semi-plush seats and whip down the armrests. The lights die and the chatter hushes. We are not just watching a movie; we are at the movies.

The previews commence. Now obsoletes due to at-home streaming, previews are no longer included in today’s at-home experience. The theatre, though, still presents them in all their glory. Let me be explicit: you do not have to watch the previews, you get to. The judgement inherent in preview-watching turns mere mortals into opinionated demigods.

Directors, writers, and producers have poured millions of dollars and thousands of hours into feature-length films, which then must be laboriously distilled down to two-minute cinematic trailers, the purpose of which are to convey the film’s every merit and idiosyncrasy while simultaneously leaving the majority of the plot hidden. Seconds after the first trailer, my eyes roll languidly over to my dad’s. “That looks dumb.”

“Yeah,” he says, “that’s a not-see.” We slap the top of the popcorn bucket, gripping with outstretched hands as much mouth-substance as possible, practically unhinging our jaws to violently shovel into our mouths fists upon fists of feed, wiping our buttery fingers on the seat in absent-minded satisfaction. The next clip runs. A tank artfully explodes. Brad Pitt cracks a joke. “That looks good,” we concur through diligent bouts of chewing. We adjust our laurel crowns, pluck grapes from the stem, thrust our thumbs to Hell, and watch a lion engulf a young citizen of the Roman Republic.

The lights fully extinguish and the theatre air thickens in anticipation of the two hours we actually paid to see. Yet we are already content with our conclusions: two monosyllabic affirmations, a sheepish concession, and many disapproving grunts.

When darkness descends upon a theatre, families, couples, teenagers, and singletons become a unified organism: the audience, composed of individual parts but all under the common sway of spectacle. Empathetic sighs, endearing “aw”’s, and collective laughs—the audience is rarely split halfway down the middle. Certainly, a sort of mob mentality guides the ethos of the patrons, gathered under a cohesive regime whose truths are self-evident: that all movie goers are created equal and that they are endowed by the excessive entrance fee certain inalienable rights, that among these are an enjoyable, and eminently silent, experience. Only at the movies can you justifiably yell at someone for talking, which logically seems to check out… This type of behavior is nearly unacceptable at a home-viewing, an event more often social than cinematic. In a darkened theatre, however, everyone has journeyed so far and paid so much that entertainment is no longer an option. It is required, necessitated.

I have paid $12 to live under a set of societal impositions that force me to focus on one piece of stimulus for more than 10  minutes. There is absolutely nothing else (acceptable) for me to do besides watch the movie. Only recently have I realized that I don’t pay for the panoramic grandeur; I spend $12 to not be distracted. The rest is bonus.

Going out to the movies is much more than simply watching a movie. While the previews elevate our consumerism to a status nearly divine, the actual feature corrals the whirlwind of sensory intake that composes our everyday lives into one, neat zephyr. While I’m at home watching a movie, I’m also reading its review and tweeting about the movie I’m missing. It’s monstrous. I’m a monster. Perhaps counterintuitively, at the movies, it is the social coercion and its nearly dictatorial regard for silence that frees us from our frantic need for stimulation, so that we may detox on a steady stream of unbroken media.