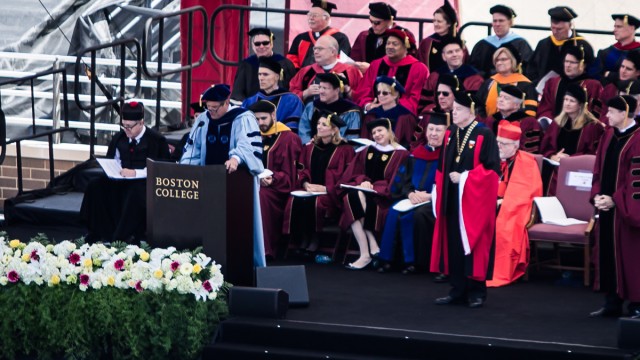 Dean of the Carroll School of Management Andrew Boynton recently reached a $60,000 settlement with the U.S. Securities and Exchange Commission (SEC) in relation to a violation of auditor independence rules by public accounting firm Deloitte & Touche LLP.

Boynton worked in a formal capacity with Deloitte Consulting LLP, which was a sister firm of Deloitte & Touche at the time of the violation. He simultaneously served as a trustee on the boards and audit committees of three outside funds that were audited by Deloitte & Touche.

This presented an independence issue, as Deloitte Consulting and Deloitte & Touche are both subsidiaries of the same parent company, Deloitte LLP—the U.S. member firm of Deloitte Touche Tohmatsu Limited (DTTL).

“Dean Andy Boynton acted in good faith at all times,” said Boynton’s attorneys, Ken Lench of Kirkland and Ellis in Washington D.C. and Susan Moniz Harrington of Rubin and Rudman in Boston. “His business relationship with Deloitte Consulting did not negatively impact his decision making as a board member.”

Boynton’s involvement in this matter will not affect his standing with Boston College as the dean of the Carroll School.

“The SEC order involved consulting work that was unrelated to Dr. Boynton’s duties as dean,” University Spokesperson Jack Dunn said. “Andy Boynton is an outstanding dean of the Carroll School of Management who enjoys the full support of the University.”

“Andy Boynton is an outstanding dean of the Carroll School of Management who enjoys the full support of the University.”

Auditor independence rules require outside auditors to remain independent from their clients to ensure no possibility of a firm compromising its objectivity and impartiality when auditing financial statements, according to a press release from the SEC. In this case, Deloitte & Touche violated this policy with respect to the appearance of independence by failing to conduct an independence consultation prior to entering into a business relationship with Boynton, while also claiming independence from three funds with which Boynton was involved.

Boynton’s initial independence consultation was not conducted until five years into his working relationship with Deloitte Consulting. According to the press release, Deloitte Consulting acquired a proprietary brainstorming business methodology from Boynton in 2006 and worked with Boynton to institute it, with both internal and external firm clients through 2011. Boynton was compensated with consulting fees for his external client work.

Deloitte self-identified the independence violation and voluntarily reported it to the SEC in March of 2012, according to Reuters.

Furthermore, Boynton failed to clarify his involvement with Deloitte Consulting LLP on an annual trustee and office questionnaire administered by APLS Fund Services, a form required of him as a trustee of the three funds’ boards and audit committees. According to the SEC, APLS’s questionnaires did not fully express business relationships with the auditor’s affiliates—thus, it lacked the framework to prevent auditor independence violations.

Ultimately, the SEC sanctioned Deloitte & Touche for violating auditor independence standards, charged Boynton for similar reporting violations, and sanctioned the ALPS for related compliance violations. All parties reached a settlement agreement for the charges brought against them. Deloitte & Touche settled with the SEC for upward of $1 million in disgorgement of audit fees, interest, and penalties. Boynton settled for just over $60,000 also for disgorgement, interest, and penalties. ALPS reached a settlement with the SEC for a $45,000 penalty.

Correction: September 10, 2015
An earlier headline for this article described that Andrew Boynton was “fined by” the SEC. This headline has since been updated to clarify that the $60,000 in disgorgement fees, prejudgment interest, and penalties were issued by the SEC and reached in settlement outside of court.

CSOM andy boynton
University Enters The ‘Eduroam’ Era With Uncertainty
‘The Visit,’ Acapellafest, And Nick Jonas This Weekend In Arts