Home » ‘Sober Emily’: I’m Not Judging You At Parties, I Swear 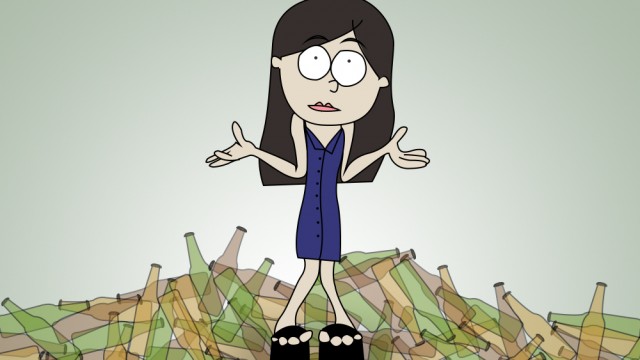 ‘Sober Emily’: I’m Not Judging You At Parties, I Swear

Disclaimer: It’s my last time around, and I’m ready to get real vulnerable guys. This is the first of a series of columns—sometimes serious, sometimes not-so-much. Here are some sobering thoughts for y’all .…

“Sober” pronounced “so-burr,” rhymes with October and “sad,” and its synonyms include: “steady,” “sedate,” and “serious.” If you look up sober on Urban Dictionary, the example sentence is: “I am sober unfortunately!” The associations are all about absence, like you are inherently missing something if you are sober: missing alcohol and missing out.

Using the word “sober” as the qualifier for my column automatically vests it with a negative air—as if my name is framed by smelly leftovers. For those of you who don’t know me, I’ve never had a drink in my life. My parents never had to worry about my being pressured—though the image of a mob of high schoolers chanting my name, offering me shots, and triumphantly carrying me on their shoulders would really add to this story.

The imagery is going to have to be a little more low key. Picture this: 14-year-old Emily, surreptitiously throwing away people’s bottles and engaging in preachy debates about the “cons” of drinking. She reigned sober, twirling her baton and looking down presumptuously from her moral high ground. My reactions were stubborn and premature, but they were all coping mechanisms.

I realized I was defending myself without being attacked. In the same way my classmates respected my decision not to drink, the least I could do was the return the favor. With time, I grew accustomed to it. I learned to make fun of myself, to peacefully explain “why”—sometimes more than once, sometimes to the same person, and sometimes to that same person four times in one night.

My new approach was lighthearted and detached. I found it to be highly entertaining to see my actual personality interpreted as drunkenness (e.g.: people asking me how many drinks I’d had: “No guys, this is just how I dance”). Often I was a little too detached. When I was bored I’d often entertain myself by making things up: introducing myself as Gertrude, putting on my pseudo-Jersey accent, talking about my four children with four different men. Not drinking was never a key facet of my personality: it colored more than defined me. Like, “Oh, and also, she doesn’t drink.”

College was where the title “Sober Emily” was conceived and coined, used for the logistical purpose of separating me from the other 20,000 Emilys in my friend group. The title’s lifespan was momentary, but it got me thinking. I grew up in a culture that unabashedly embraces nicknames, and so I was shocked that it didn’t catch on. At Boston College, I had to start from scratch and for the first time, I was going to parties with people I hadn’t met. So in the insular and isolated context of a party, my identity was flattened and reduced to a one-dimensional cartoon character: “Sober Emily.”

This summer I worked with someone who had just recently graduated and found himself on crutches due to a nagging injury. Very quickly he became known as “The Guy with Crutches.” In an attempt to deflect this snap judgment, he showed us a pie graph of his life wherein only a thin slice represented his time using crutches. He pointed to that 1 percent of his life when he had crutches and explained how that small fraction of his life became 100 percent of our interactions with him.

It was a distinction over which he didn’t have any control. He didn’t choose to disclose that information about himself, but we all reached a consensus:

Crutch Guy: It literally says nothing about who I am.

Everyone: Nah, this is easier.

It’s easier to put people into neat and easy categories in our heads. I know because I do it all the time, but it only detracts from the quality of interactions and the potential of our friendships. As soon as I realized that people existed outside of the context of a party, my cynicism was dulled.

I’d like to think of this column as an unfinished piece, a work in progress. Talking about it with friends has helped shed a lot of light on the way that we talk about drinking and the weight it has on our lives. I say it’s unfinished, not because I’m afraid of the consequences of making an assertive statement, but as reaction to my 14-year-old sass and false sense of entitlement.

When we categorize someone, we shut down dialogue and conversation. Instead of stopping when we see a difference and cutting things short, we should take that difference as a green light.