Home » What You Didn’t See In ‘Straight Outta Compton’ 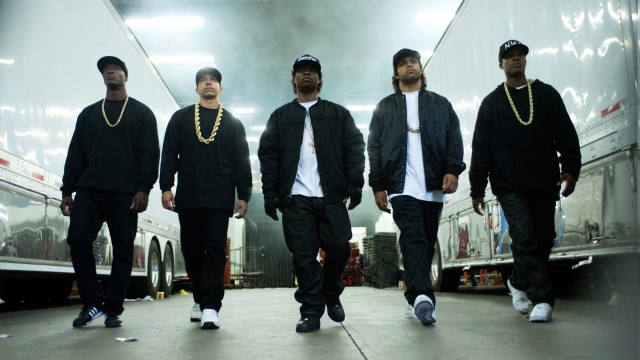 What You Didn’t See In ‘Straight Outta Compton’

In the same year that brought us Amy and Montage of Heck, it’s not surprising to see how Straight Outta Compton has courted both critical praise and broken box office records in its opening weekend. The biopic charts the epic rise and fall of N.W.A, the notorious rap group from Compton responsible for spearheading the rise of West Coast hip-hop in the late 1980s and launching the careers of former members Ice Cube, Dr. Dre, Eazy-E, MC Ren, and DJ Yella.

The film, lauded by critics as both candid in its portrayal of the pitfalls in N.W.A.’s career and devoid of biopic cliches, is built on the strengths of its relatively unknown cast: Jason Mitchell as Eazy-E, Corey Hawkins as Dr. Dre, Aldis Hodge as MC Ren, Neil Brown Jr. as DJ Yella, and O’Shea Jackson Jr., who bears a striking resemblance to his father, plays Ice Cube. The first half of the Straight Outta Compton is the stuff of magic—Dr. Dre scraping by on DJ gigs, Ice Cube writing song lyrics on the school bus, Dre and Cube cajoling a reluctant Eazy-E into recording the now-iconic ‘Boyz-N-Tha-Hood,’ the establishment of N.W.A. under Ruthless Records and Jerry Heller, and the eventual departure of Ice Cube from the group, marking the beginning of the end for N.W.A.

In between are spotty depictions of gang violence and working class life in Compton. We watch with mounting frustration as the members of N.W.A. are incessantly harassed by the police, patted down, and cuffed for doing absolutely nothing. In the years leading up to the Rodney King riots, N.W.A. pens it’s expletive-laden and most nefarious track, “F—ck tha Police” as a reflection of the harsh realities of living as young black men during the “War on Drugs” era that disproportionately affected black Americans. Police brutality, a common thread throughout the film, culminates in the FBI banning “F­—ck tha Police” and the arrest of N.W.A. when the group decides to perform the protest song at a concert in Detroit, despite the track’s censorship.

The second half of the film careens into Eazy-E’s deteriorating health, the end of his professional relationship with Jerry Heller, and losing his final battle with AIDS. It’s then that we realize that Eazy-E, the only deceased member of N.W.A., is also the most nuanced character in the film. While music biopics tend to only chronicle artists once their subjects are deceased, Straight Outta Compton was produced by Dr. Dre and Ice Cube, two of the film’s major protagonists. It’s easy to see where the biopic falls short in exposing some of the more seedy aspects in the group’s history.

It’s what didn’t make it onto the big screen that was most troubling to critics. Dr. Dre’s multiple violent incidents were glossed over entirely—from his assault of fellow rapper Tairrie B at a 1990 Grammys party to his repeated abuse of former girlfriend Michel’le. Most notably, Dre’s famed 1991 assault of reporter Dee Barnes failed to make the film’s final cut. In an article for Gawker, Barnes described Dr. Dre assaulting and “beating her mercilessly on the floor of the women’s restroom at the Po Na Na Sauk nightclub.” In between the group’s misogynistic lyrics, allegations of racist casting calls, and the film’s overall depiction of women (and black women, in particular) as both interchangeable and overly sexualized objects, Straight Outta Compton doesn’t sit well with all critics. And while influential girl groups like J.J. Fad, largely credited for helping to launch the success of N.W.A., were omitted from the film entirely, director Gary Grey admitted that Dre’s assault on Barnes was included in an early draft for the film. He felt that, “You can make five different N.W.A. movies. We made the one we wanted to make.”

There’s a lot to be said about making the movie you want to make when it comes to the erasure of the more negative aspects in N.W.A’s history. While the biopic touches on more poignant and pertinent issues such as police brutality, Straight Outta Compton proves that Ice Cube and Dr. Dre can quite literally rewrite the past by exercising creative control over their own on-screen depictions. Rather than portraying all of the good, the bad, and the ugly, the end result is a diluted, albeit well-crafted, version of history that ignores the more grisly underpinnings of N.W.A.’s past and casts the film leads in an undoubtedly more flattering light.

movies days of summer straight outta compton
Ben Folds Returns: And The Piano Man’s Still Got It
UGBC Budget Increased To $328,000 For The 2015-16 Academic Year