Home » In Recognition Of Simboli Family, A New Name On Brighton Campus 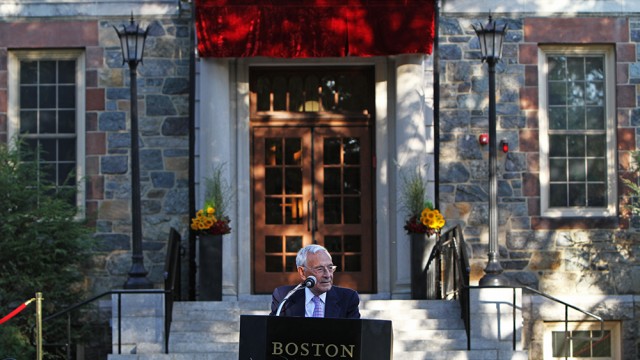 In Recognition Of Simboli Family, A New Name On Brighton Campus

On Brighton Campus, the building that houses the School of Theology and Ministry (STM) and the Institute for Advanced Jesuit Studies now bears a new name, the result of two donors’ most recent gift to Boston College through the Light the World fundraising campaign. “Simboli Hall,” named for Anthony and Gloria Simboli, opened its doors in an official dedication ceremony on Wednesday evening.

“With their most recent gift, the Simboli name now graces this beautiful building that was once known as Philosophy House, a building that today fosters the work of the Catholic Church and of the Society of Jesus,” said Jim Husson, senior vice president for University Advancement, to an audience on Brighton Campus. “Simboli Hall is a most fitting tribute to the noble spirit of philanthropy and faith that define Tony and Gloria’s lives.”

Among the audience were friends and relatives of the Simboli family, as well as a number of deans, faculty, leading administrators, and trustees from the University.

The journey to Simboli Hall’s naming began in February 1946, when Anthony Simboli, BC ‘50, enrolled as an undergraduate in the school of Arts & Sciences at the age of 16. A resident of the North End and the first of his family to attend college, Simboli accelerated his way through his studies, graduating with both a bachelor’s degree in chemistry and a master’s degree in philosophy in the same year, 1950. Husson noted that Simboli remains the only BC graduate, to his knowledge, to have earned that distinction. Simboli’s decision to pursue a master’s degree and complete his thesis in two semesters attests to his risk-taking and enterprising spirit, what would later come to define much of his professional career.

“BC taught me discipline, they offered me guidance, and I learned how to get along with people—that was the beginning of completing my Jesuit education,” Simboli said.

After graduation, Simboli began his professional life as an agent for the Central Intelligence Agency (CIA), serving for three years in the Far East.

After leaving the CIA, Simboli launched his own business, establishing a large network of drugstores and convenience stores—a novel concept in the 1960s. This gave way to a career in real estate development, where he developed notable sites such as the Harbor Towers, Joslin Clinic, and Symphony Plaza in Boston.

“The love of family, friends that cheered me on, and a Jesuit education that provided my moral compass, were the keys to my success,” Simboli said.

“BC taught me discipline, they offered me guidance, and I learned how to get along with people—that was the beginning of completing my Jesuit education.”

Simboli eventually founded ACS Development Corporation, a real estate development firm, where he currently serves as president and chairman. Simboli also serves on the real estate council for the Archdiocese of Boston, as a trustee of St. John’s College, and as president of the board for the Speech and Hearing Foundation of Massachusetts.

Simboli and his wife, Gloria—whom he met through a friend at the University—have two children, Anthony and Patricia, and three grandchildren.

Their grandson, Trevor Simboli, pulled the cord at the dedication ceremony to unveil the newly named Simboli Hall that stands on 9 Lake Street. Simboli Hall joins two other University spaces on Brighton Campus: the Cadigan Alumni Center and the McMullen Museum of Art, both also named for the gifts of donors to the University.

Leahy addressed the historical significance of the property, which has served for the purpose of theological education since its establishment.

The grounds where Simboli Hall sits were purchased by the Archdiocese of Boston in the 1880s, and a seminary was erected in 1887. The original structure was burned in a fire in 1936, and later rebuilt in 1937 to house 60 seminarians.

“Indeed, there is a unique sense of purpose and community here, that is transcendent,” Leahy said.

The University acquired the property from the Archdiocese in a negotiation process that lasted from 2004 until 2007.

Simboli Hall has stayed true to the religious roots of the property’s initial establishment, and currently houses two academic enterprises that work to advance the University’s Jesuit Catholic mission.

“Simboli Hall will be the site for an especially significant way of discovering and transmitting knowledge of God, of spirituality, and of our values and beliefs in social justice,” Leahy said. 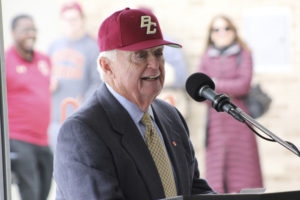