What can we learn about leadership? What will be required of leaders in the future? These were questions asked by Julia Gillard, former prime minister of Australia, as she began her address in Robsham Theater on Tuesday night.

Gillard’s visit to Chestnut Hill is The Winston Center for Leadership and Ethics’ first presentation of the 2015 Clough Colloquium speakers series. Gillard served as prime minister of Australia from 2010 to 2013. She also worked as deputy prime minister and minister for education, employment, and workplace relations, and social inclusion following the 2007 win of the Australian Labor Party in the Federal Election.

Born in Barry, Wales, Gillard migrated to Australia with her family in 1966. Her father was a nurse while her mother worked as a care worker in a nursing home. Gillard went on to receive an education in Australia where she attended the University of Melbourne. Today, she works with the Center for Universal Education in Washington and has recently published a book, My Story, on her time as Prime Minister.

Gillard began her address with an overview of her journey to politics and her concern for education. As the daughter of Welsh parents, she was instilled with their practical values of working hard and of the power of education to transform their lives. Because her parents lacked traditional education early in life, they always had a “wistful sense of what if,” she said.

“My parents instilled in me the sense that every day of education was a privilege to be cherished and taught me to think with ambition about my life,” she said.

While in school in Australia, she grew up in an environment relatively free of gender stereotypes because of her parents’ attitudes about education, she said. This lack of strict gender roles led her to become involved in campaigns to end such stereotypes. She later went on to play a critical role in the removal of an Australian Parliament speaker on the grounds of sexism in 2012. She was also an advocate for widespread, global education.

“I was hooked on the belief that you could fight for the education of all and you could win,” she said.

Gillard also spoke about the importance of advocating for equality in order to overcome gender stereotypes in the professional and public world. She acknowledged society’s presuppositions about gender and the workplace. Noting a study mentioned in Sheryl Sandberg’s book, Lean In, she claimed gender stereotypes are instilled so deeply in the brain that most of the time we are not aware of them.

She felt out of place, she said, when she found herself to be one of few, if not the only, woman in the boardroom during her early career in the political world. Changing gender stereotypes will not happen, she said, until society works patiently through the complexities of those stereotypes.

“While gender stereotypes are not immutable, change is achievable,” she said.

Often, her appearance has been commented on at political functions, like in a news report after her meeting with the leader of NATO, she said. “Men and women need to be soldiers in this fight for gender equality,” she said.

In order to be a leader, Gillard said, it is necessary to hone a sense of purpose and foster a strong sense of self. She was able to work through campaign and her terms as a leading political figure because of this inner reserve created by her innate sense of self, she said.

Finally, Gillard talked about the everyday problem of today’s society to decide between completing the urgent task while neglecting the important, more meaningful tasks in life. She said we must find discipline to carve out time in our daily lives to do more of the important rather than the urgent. Leadership, she said, requires not only purpose and fortitude, but also the necessity of looking to the larger things that will shape our world in the future. These things that will shape our world include technological change, globalization, climate change, and global citizenship. Though it may seem daunting for an individual to enact change, it is possible, she said.

“Doing each and all of these may not make you president,” she said, “but they will make you an empowered actor, a shaper of the future, and a bringer of reforms that our world so desperately needs. I encourage you to be that kind of leader.” 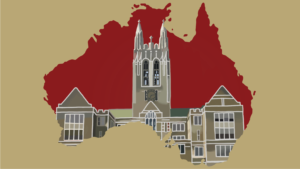 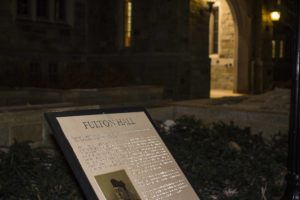