Home » Activist, Comedian Kevin Breel To Return To BC 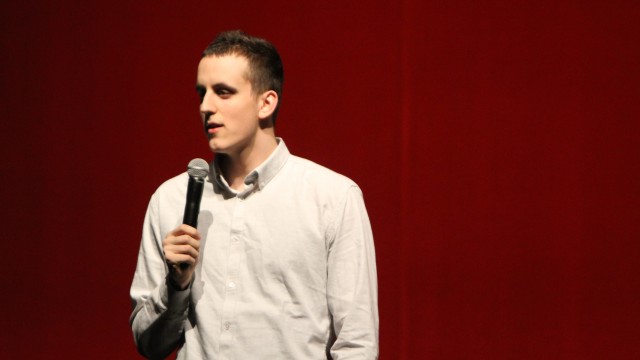 Activist, Comedian Kevin Breel To Return To BC

Kevin Breel, a comedian and mental health activist who rose to prominence two years ago after he delivered a well-received TEDx Talk, last visited Boston College in February. This Tuesday at 7 p.m., the 21-year-old will be back on campus to perform for students in Robsham Theater.
Be Conscious, an effort by the Undergraduate Government of BC (UGBC) founded in Summer 2014 to facilitate a more open conversation about mental health at BC, is responsible for bringing Breel to campus.

His appearance last February was extremely successful, the director of mental health programming for UGBC Megan Flynn, MCAS ’17, said. Flynn, one of the students who organized the fall event, also helped bring Breel to campus last year when the event was sponsored by BC’s chapter of To Write Love on Her Arms, in tandem with Be Conscious and UGBC.

Despite the heavy topic, Flynn said that Breel’s talk in February was not overbearing. She said this event will also attract people who would normally not attend, because of Breel’s unique comedic vehicle for communicating his activist message.

“People could relate to it and have a good time,” she said.

Breel’s TEDx Talk, delivered in 2013 when he was just 19, is called “Confessions of a Depressed Comic.” It recounts his experience with depression, building upon what he calls the difference between “the life everyone sees” and “the life that only I see.”

“Real depression is being sad when everything in your life is going right,” he said.

Connor Marshall, MCAS ’18, is one of the assistant directors of Mental Health Programming for UGBC, and she said that Breel’s talk this Tuesday will likely expand upon the themes of his TEDx Talk to focus on the idea that, particularly among high school and college-age students, the stigma surrounding depression and mental health issues puts undue burden on those already suffering from the disease.

“He takes this topic that is very real and deep and he puts a twist on it that makes it something college kids specifically won’t shy away from,” Marshall said.

Between YouTube, TED’s website, and other outlets, Breel’s TEDx Talk has millions of views combined, and is one of the most-watched TEDx Talks ever. Since its posting, Breel has become one of the most visible young mental health activists in the country. He is currently a national spokesperson for the Bell LET’S TALK Campaign, a depression-awareness movement organized by the Canadian media giant. The campaign has trended worldwide on Twitter in the past.

In addition to his activism and fundraising efforts, Breel spent much of last winter and spring touring Canada and the United States, playing in Peoria while also doing shows in locales as varied as Los Gatos, California and Amherst, Nova Scotia. His first book, Boy Meets Depression: or “Life Sucks and Then You Live,” was released on Tuesday, Sept. 15. After the show in Robsham there will be a signing and meet-and-greet opportunity.

Mental health is one of several issues UGBC hopes to similarly spotlight this year. It also plans to address alcohol use on campus, LGBTQ issues, ensuring and strengthening students’ access to free expression, and improving First Year Experience.

Each of the topics has a joint committee, run by UGBC, working on holding events and inviting speakers to campus. Breel is just the first speaker in a year-long lineup designed to keep open a running dialogue about serious issues affecting the BC community.