Student Activists, Faculty Pave The Pathway To A More Accessible BC Campus

For many students and faculty, scaling the 12 stairs leading up from O’Neill Plaza to the Academic Quad is simply part of the routine when comes to travelling across campus. For an individual aided by a wheelchair, however, this innocuous set of stairs can be a recurring obstacle to learning. Particularly in the past couple years, there has been significant call for infrastructural alterations on campus to make traversal more accessible to the entire Boston College community.

A complaint filed with the U.S. Department of Education’s Office of Civil Rights in May of 2013 over accessibility on BC’s campus led to state and federal government investigations over the University’s compliance with accessibility laws. Students, too, have criticized the layout of certain areas of campus as being nuisances to navigation. Getting to Upper Campus requires walking up several flights of stairs—or using either Beacon Street or Hammond Road—roads which, in some places, do not have full sidewalks or adequate facilities to accommodate the diversity of students’ travel needs. In the experience of Phoebe Fico, student activist and MCAS ’16, inclement weather also poses a significant issue, as maintaining balance on snow- or ice-covered walkways while on crutches is particularly difficult. (Full Disclosure: Fico is also a writer for the arts section of The Heights.)

“I found myself getting to class with the help of friends and strangers who were nice enough to help me up and down ice-covered stairs,” Fico said. “If the weather was really problematic, I would often have to Skype into class for that day.”

Since the beginning of the 2014 fall semester, a new webpage describing the institution’s resources and amenities for those with differing mobile needs was added to the University’s homepage, and a door was added on the second floor of O’Neill Library to eliminate the need for stairs when moving across the atrium. This year, a ramp was installed in front of Carney Hall, and an existing ramp was modified to allow a more direct path to O’Neill Library.

Nonetheless, certain newer additions to the institution’s configuration, such as the set of stairs leading up to the Academic Quad, continue to pose problems for some students. Campus accessibility activists also identify substantial room for change in the manner in which day-to-day classes are conducted and campus resources are made available to students. To that end, a recent town assembly for undergraduates set out to address the nature of the accessibility problems faced by students on campus.

Last Thursday, McGuinn 334 housed the year’s first congregation of the Undergraduate Government of Boston College’s (UGBC) Council for Students with Disabilities. The event was attended by a handful of advocates for students with differing travel needs on campus, in addition to Richard M. Jackson, a professor in the Lynch School of Education, and Paulette Durrett, assistant dean for Students with Disabilities, who works through the Disability Services Office with students who have unique physical, medical, and psychological needs. The first order of business was to assert the goal of the evening’s forum—to identify ways of affording students the freedom to interact with materials and the campus without physical barriers.

“Is a brand new curriculum in this digital age going to be accessible?” Jackson asked at the forum. “How can we better orient our students to get the benefits of a BC education?” Jackson and Durrett aptly described the root dilemma in making the institution more accommodating to students’ challenges with accessibility.

One attendee suggested that future curricula ought to employ more flexible, digitized syllabi released earlier with increased accessibility to students with distinctive needs, especially blind students who may need assistance in interpreting course requirements. Additionally, Jackson emphasized the necessity for the learning process to coalesce with technological aids. “Tools like the Voice Allowed app on Android are powerful and applicable,” he said.

Voice Allowed Reader, available on the Google Play Store, reads aloud the text displayed in Android apps and allows one to alter the pitch and speed of the information being communicated. Taking advantage of apps like Voice Allowed Reader enables students to optimize the resources available, Jackson said, and therefore gain the most out of an in-class lesson.

Durrett asserted that the need for an increased sense of civic engagement among students begins at home in Chestnut Hill. “Many students believe that community service is defined by service trips abroad and with third party organizations,” she said. “This is not true—community service begins right here at home, at Boston College.”

Durrett correlated these sentiments to solving the problem that inclement weather poses to the navigational efforts of many students. Encouraging undergraduates to assist with pathway-clearing efforts like shoveling snow would not only provide participating students with credit for their services, but would also ease the tensions for some their peers as they made their way to classes in difficult weather conditions.

Fico, who serves as chair of the UGBC Council for Students with Disabilities, supported Durrett’s rationale. “Moving forward, we need to be able to proactively advocate our cause to professors and administrational members,” she said. “We want disability to be seen as something positive, something to be embraced—as a sign of diversity.”

accessibility
Transfer Tales: Switching Schools Is More About Fit Than Ranking
‘Cheese And Crackers, Beer And Packers’: The Dangers Of Regional Stereotyping 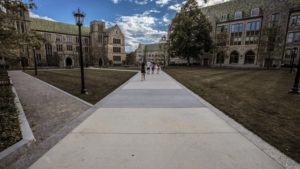