Hailed in with the recent discovery of liquid water ridges on Mars, The Martian is beautifully rendered and duly heart-warming. It is a film examining contrasts—between high drama and comedy, finer science and pop culture references, and grandeur and plain fun, The movement between all these different elements (credit to director Ridley Scott) is done seamlessly and ultimately provides some of the best moments of the film.

For example, after dedicating extended periods of time to explaining the science behind what was being done, Mark (Matt Damon) simply says, “I’m going to have to science the shit out of it”—creating a genius hero who speaks, and often acts, like a typical frat boy.  It certainly makes him more relatable to the audience, who may or may not have necessarily understood how he managed to make water on Mars. This is mirrored in the soundtrack, which cycles between grandeur scores and disco music. The comic relief, both through the music as well as the script, is appreciated. The Martian at one point references Lord of the Rings, which adds some necessary lightness to the story, but coupled with the casting of Sean Bean (Boromir), the joke is given a deeper, more clever presence in the film. In effect, the liberally dispersed humor prevents it from becoming overly gloomy, considering the seriousness of the dilemma presented in the film.

The attention to detail regarding the science is astounding, in the most positive way. It is clearly evident that extensive research was done beforehand to make the film more grounded in reality. This is no Interstellar. In fact, Andy Weir, the author of the book the film is based on, was a computer programmer and heavily committed to accurately presenting the science—even writing a software to calculate the orbital paths he uses in the story. NASA was even involved in the film and commented on the accuracy of the techniques portrayed. Their support, however, is not surprising considering this film is a wonderful, triumphant advertisement for the organization.

Even more than the accuracy, the simplistic presentation of the intricate scientific practices is most commendable. There is a bit of hard-boiled science, but it has been watered-down enough to be understood to the audience, but not to the point of condescendence. One of the film’s strengths is the ability to make each character sound and look clever without having them spout gibberish. There is the resounding sentiment that physics, mathematics, chemistry, and, yes, even botany are really fascinating and fun.

The only aspect where the film jars the viewer is with its female characters. They are given high ranks—the captain is a woman (played by Jessica Chastain)—however, there is a serious disparity between what they actually do versus their male counterparts. None of the serious calculations were done by any of the women, the closest thing to a contribution a woman makes in the rescue is Mindy Park (Mackenzie Davis), who uses the satellites to track Mark on Mars. Surveying the leadership provided in the film, Annie Montrose (Kristen Wiig) has the highest position as the Director of Communications—and as the head of PR, Montrose relies on the male directors to explain the situation. The largest role that a woman has is when Captain Lewis has to make a difficult moral decision. Yes, it is a benefit to see a few women astronauts, yet it is simply an image with little substance.

Overall, however, this film is aesthetically impressive, cleverly written, and well executed. Damon’s Mark Watney is likable, relatable, and memorable. He is supported by an excellent cast, from Sean Bean to Jeff Daniels, and while they did not have an overwhelming amount of screen time, the actors made the most of what they had. For a September premiere, The Martian is as good as they come.

matt damon ridley scott the martian
‘The Walk’ Is The Rare Spinetingling, Character Driven 3D Adventure
Being Bound To The Same Struggle Bus 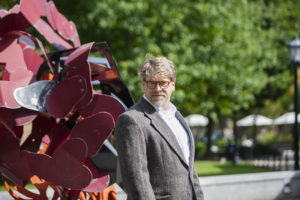 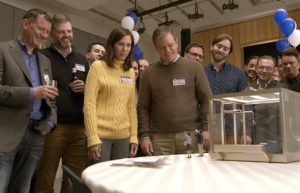