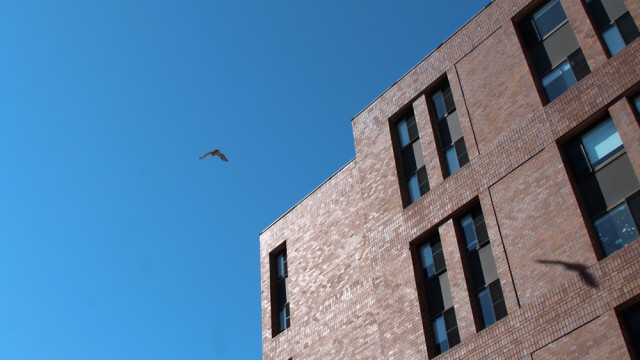 A uniform system of card readers will be implemented in academic, administrative, and residential buildings across campus over the next three years, which—alongside a series of other infrastructure upgrades—will represent a significant overhaul in the University’s approach to campus security and identification systems. Card readers will change to operate based off the University Wi-Fi. Additionally, the blue light telephone system around campus will change. In certain locations with clusters of the blue light phones, the devices will be upgraded and consolidated. Security cameras will be also placed at the entrances to all buildings.

The changes, which are overseen by Stanley Security, were approved at the Board of Trustees meeting Sept. 25. John King, executive director of campus security and chief of BCPD, has helped to lead the new security initiatives. The impetus for the changes is to standardize the security experience across campus, said George Arey, director of residential life.

“The University made a decision to invest in campus safety and security to bring us up to par with peer institutions, and Director King led an effort over the past year to identify ways in which we could make sure on-campus was as safe and secure as possible by investing in upgrades in technology,” University Spokesperson Jack Dunn said. “We realized, while BC is a very safe campus, that we had to make investments that would enhance our overall campus safety and security.”

The Wi-Fi-based technology that the new card readers will depend on is commonplace throughout the country, Dunn said. In regard to problems students and faculty have reported with the new eduroam network, Dunn feels confident that any issues will be resolved over the next three years.

King said the Wi-Fi card readers will have a memory system in place to recall the cards that match it, rather than simply pulling from the Wi-Fi all the time. Thus, even fluxes in eduroam would theoretically not affect students’ ability to get into the buildings. The new card readers will eventually be installed in the exterior doors of buildings, as well as in individual dorm rooms. Individual rooms will receive a four-digit PIN code reader as a secondary security feature. The original magnetic stripe capability will be retained in the cards for summer programs that will not need to be smarter cards, King said.

“What we’ve done is really look at the security systems that the University had in place and our approaches are really to make enhancements or improvements in systems that might be in some buildings but not in others,” he said. “With the construction of two brand new residential halls we asked ourselves, ‘What do we want moving forward?’ … Once we made the decision to put them in those two facilities, it only makes sense to put it in the rest of them as well.”

A trial of the new security system will begin in Cheverus Hall on upper campus. New card readers will be installed there during Winter Break, and students in that residence hall will be issued new cards. Cheverus Hall was picked for the pilot program for several reasons, including the fact that it is a smaller building, so fewer students would be adversely affected if there was a negative issue, Arey said.

The new cards will work without physical contact, so a student approaching a building could have the card in a pocket or backpack and be able to access the building without pulling out the card, King said.

“You might have to get a little close,” he said. “These readers can read a few feet away.”

In addition to the new card reading technologies, security cameras and delayed egress devices—a door closing mechanism that discourages door-propping—will be installed in residence halls. Currently, Walsh Hall on lower campus is the only residence hall with security cameras installed. The cameras, King noted, would not have a control center where someone would watch activity at all times. Rather, they would be used, for example, if there were a break-in and the criminal could be identified from the tape.

The blue light phone systems, King said, are more an element of comfort and security for parents and students rather than an often-used system. The devices were more useful before cell phones were so prevalent, but they are still useful to keep the population comfortable, he said. Major changes to residence halls will not be made during the school year so that the student population is not disrupted. Instead, they will be made over the next few summers. Changing the card readers, however, can be done at any time because it will only involve adding the readers to the exterior doors.

‘The Martian,’ Becky G, And Improv Asylum This Week In Arts
BC Trustee Returns To Nebraska Roots As New President Of Creighton