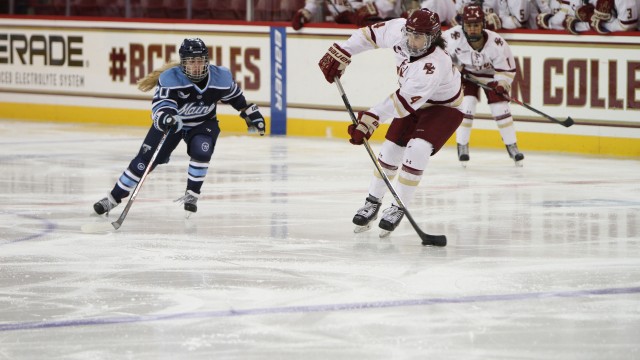 It’s important to have a team that works well together, in order to have the best play possible on the ice. Coach Katie Crowley seems to have found the perfect balance on Boston College’s women’s hockey team, as three of BC’s four lines contributed a goal to BC’s 4-0 win against the University of Maine.

The Eagles captured an early lead in the first period, with two goals just five minutes into the game. Haley Skarupa shot with force into the right side of the goal, sending the puck across the back pipe. Less than a minute later, Andie Anastos passed to Kali Flanagan, who attempted her own shot. Meghan Grieves tipped the shot into the net between goalie Meaghann Tracy’s legs, putting the Eagles up 2-0. Skarupa’s and Grieve’s goals set off a firestorm, with BC dominating offensively in the first period, putting up 24 shots against Maine’s six.

“I think we’ve been focusing on when we do get the puck to be firing it on net, so I think we did a really good job in that aspect,” Grieves said.

The second period gave the Eagles more confidence, contributing to more possession of the puck, especially near the Black Bears’ goal. The puck rarely landed in the Eagles’ side of the ice. BC surrounded the Maine’s goal like vultures, each hoping her shot would allow another goal to slip past the goalie. Treacy and her defense worked hard against BC, ultimately saving 48 shots in the 60 minutes.

“This goaltender is a really good goaltender,” Crowley said. “We were able to put it by her.”

The Black Bears tried to put more pressure on the Eagles in the second half of the next period, but only attempted one shot against BC’s defense. BC provided insurance against a potential threat with another goal by Skarupa. After getting another pass from Kristyn Capizzano, Skarupa shot the puck into the middle of the net. Treacy could not deflect it in time, and it nailed the back net.

“I think I was just in the right place at the right time,” Skarupa said.

Minutes later, the Eagles sealed the win with their fourth and final goal by Patty Kazmaier Award-winning Alex Carpenter. Lexi Bender slapped the puck from farther out, and Makenna Newkirk settled it, passing to Carpenter, who snuck the puck in.

The Eagles did not score in the third period, despite having eight shots on goal. Maine outshot BC for the first time in the last period, tallying 10 shots, but could not manage to get one in the net. Maine’s best attempt for a goal came when both Dana Trivigno and Megan Keller overlapped in the penalty box. The Black Bears overwhelmed the goal with several shots, but the three Eagles staved off a goal with the help of goalie Katie Burt. Burt did not get much work throughout the game, seeing only 17 shots between the pipes.

The Eagles’ performance against Maine demonstrated their ability to put together the best of the best on the ice. Almost all of the lines contributed a goal to the game, with the second line—comprised of Capizzano, Trivigno, and Skarupa—providing two goals.

“I think top to bottom of the roster, every single person played really well,” Grieves said.

Crowley echoed her sentiments, saying, “I like the way they’re [the lines] working right now.”

BC is undefeated thus far, but shows no signs of relaxing or going easy on its opponents. “Every team’s coming after us and trying to beat us,” Crowley said. With Maine being the first conference game of the season, the more meaningful games have only just begun. For now, the Eagles’ biggest question will be who isn’t going to score during a game.

alex carpenter haley skarupa katie burt katie crowley
Lawrence, Emma Watson, And Finding Modern Feminism
‘What Is The Name Of Your Favorite Playlist And Why?’