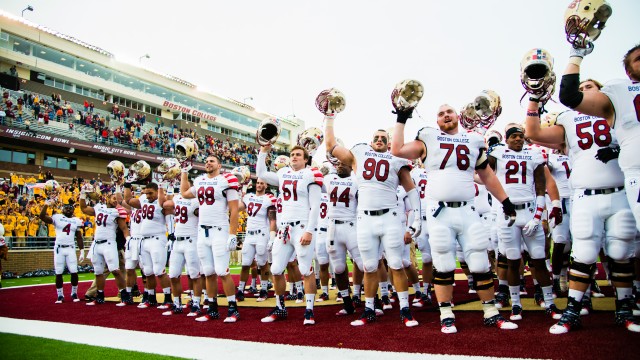 “You must be really excited about going home.”
“No, I’m not.”
“Why?”
“Right now, I’m surrounded by people who know what’s going on. When I go home, what’s going to happen to me?”

This was the conversation Susan Sheehy, a visiting scholar at Boston College, described having with a wounded soldier at Walter Reed Army Medical Center in Bethesda, Md. The soldier had endured a bilateral amputation and severe abdominal injuries. After multiple surgeries, he was getting ready to go to his hometown—away from the support system present at Walter Reed. The conversation struck a chord with Sheehy and led her to develop the Collegiate Warrior Athlete Initiative, a holistic wellness program that pairs BC student-athletes with wounded soldiers.

The program, which is set to launch in January, matches the pairs as exercise partners. Each warrior-athlete partnership would follow a routine specially designed for each soldier’s best pathway to recovery. In addition to weekly workouts, the wounded warriors would attend a wellness class on BC’s campus. This will follow a model developed by Col. Paul Lewis, a senior researcher at Fort Bragg, N.C.

“Everybody who’s in the military is an excellent athlete,” Sheehy said. “Not necessarily in a sport, but they’re physically fit, they’re trained to perform at the top. And then they get injured and they lose that.”

Maria Hutsick has recently joined the project, signing on as the head athletic director tasked with developing individualized workout regiments for each participant. Hutsick is the former head athletic trainer and director of sports medicine at Boston University. She has worked with the U.S. national women’s hockey team, and currently serves as the athletic trainer for Medfield High School in Medfield, Mass.

The wellness class will focus on Bragg’s “12 Components of Wellness,” tackling one element each week. The components, for example, could include nutrition, medication, financial planning, or familial affairs.

After the 12-week, twice-a-week program concludes, the wounded warriors will continue to meet with their peers for monthly gathering.

The program is funded for one full year as a trial project by a grant from Wounded Warrior Project.

“We would like to thank Wounded Warrior Project for this grant which will provide us the support to expand our efforts with warriors locally through health and wellness programs while continuing to connect them with our BC community,” Associate Athletics Director for External Relations James Di Loreto said in an email.

The Initiative will track progress through both physiological and psychosocial measurements, from body weight, tissue mass, and body fat percentage to anxiety scales and resiliency.

“The idea is to have all of this data collected, and to apply for some more grants, so that we can actually expand it and roll it out across the country to any school that wants to do it,” Sheehy said.

The only barrier preventing the program from starting in January is its BC institutional review board (IRB) approval, which, Sheehy said, could take months.

Should the IRB approve the Initiative in time, Sheehy hopes to host a national conference at BC at some point during the year, allowing other schools the opportunity to learn about the program. After giving presentations about the idea over the past year, Sheehy said she has been met with nothing but enthusiasm. She has heard from eight schools in the U.S. and three universities in the United Kingdom that are ready to sign up.

“People are really interested in doing this and giving back,” Sheehy said. “Not just having veterans as students, which a lot of schools are doing, but seeing what else can you do for those who aren’t going to school, or how we could welcome them to our community.”

The student-athletes who will work with the wounded warriors have not yet been selected. When an application is released, Sheehy said they will be examined holistically in an attempt to best match them. She has, however, already heard students express interest in applying.