To Phil Schiller, entrepreneurs change markets and change the world. They are visionaries, leaders, and opportunists, he said. Instead of being day dreamers or philosophers, they are risk-takers.

Senior Vice President of Worldwide Marketing at Apple Inc. Phil Schiller, BC ’82, visited Boston College this Thursday at the Dedication and Inaugural Symposium of the Edmund H. Shea Jr. Center for Entrepreneurship within the Carroll School of Management.

Introduced by Jere Doyle, BC ’87, HBS ’93, the executive director of the Edmund H. Shea Jr. Center for Entrepreneurship, Schiller entered with a booming laugh and a burst of energy. He set the tone for the tech-geared symposium, telling the audience to disregard the aforementioned directions to turn off all cell phones.

“If you have an iPhone, or an iPad, Apple Watch, feel free to turn them on, turn on the volume, take notes, take pictures, tweet, post on your friend’s wall, whatever you want to do,” Schiller said. “I think that’s really cool.”

Schiller started by sharing his personal definition of an entrepreneur. While the word has been used for centuries, it is very applicable to the Tech Revolution, he said.

Schiller believes that an entrepreneur takes on risks to create a new business, hoping for success and accomplishment. An entrepreneur is never afraid to take action. He or she influences the market, and creates unimaginable things, transforming society, Schiller said.

“Whatever path you start on is going to change. You need to adapt, and you have to move fast.”

At Apple, one of Schiller’s most important relationships was with Steve Jobs. Jobs was a mentor and genius to Schiller. Without him, Schiller said, Apple would not have the success it has today.

“The App store is a remarkable force,” he said.

Explaining further, Schiller described the original thought process behind the App Store. Apple wanted to make something better for all developers, from the most established companies to the smallest startup companies. Because of Apple’s entrepreneurship, the App Store is now available in 150 countries and claims over 1.5 million apps.

Schiller, however, was most impressed with the 620,000 new jobs that the App Store has created in the U.S.

Doyle then opened the Symposium to discussion, asking Schiller, Bijan Sabet, BC ’91, of Spark Capital, and Niraj Shah of Wayfair what role universities play in entrepreneurship.

“No, of course not,” Schiller said.

Schiller explained his position, emphasizing the importance of knowledge and versatility.

“Whatever path you start on is going to change,” Schiller said. “You need to adapt, and you have to move fast.”

Schiller was then asked how important his mentor was in furthering his career. He emphasized the importance of students’ relationships with their professors. Opportunities like BC Tech Trek, a week-long field study in areas such as the Silicon Valley, NYC, and Boston, could also help students find a mentor. Technology councils and summer internships are also places that students find mentors and future job opportunities, he said.

“Take what you have learned during the year, and go work somewhere that you can apply it in an experiment,” Schiller said. “Fear is a great motivator.” 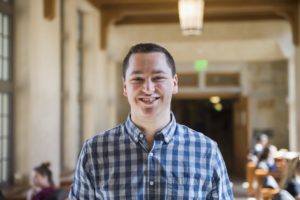