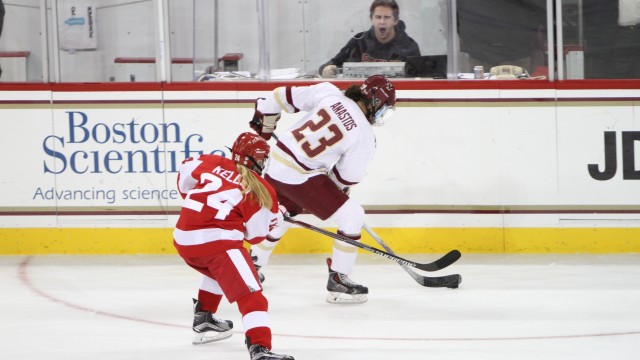 Boston College women’s hockey entered Conte Forum on Tuesday night riding the momentum of an 11-game win streak. While a run of that length is impressive in and of itself, the fashion in which the Eagles have been dominating their opponents has made the streak all the more extraordinary. During the winning streak, the Eagles have outscored their opponents 65-13, most recently including a rout of Boston University 8-1 on the road last Saturday.

This dominance would not continue in their second matchup with the Terriers. For the first time this season, the Eagles found themselves in a dogfight.

BC came out of the gate in the first period like a team with a psychological advantage. From the first whistle, the Eagles set the tone by getting to pucks first in the open ice, and taking the pucks right off the sticks of BU skaters. BC broke the scoring cap early on an impressive give-and-go between Megan Keller and Alex Carpenter, resulting in Carpenter’s 16th goal of the season.

BU goaltender Victoria Hanson responded well in the face of pressure early, saving 15 shots on goal that BC managed in the period. A rebound off the pad of Hanson, however, found its way to the stick of BC senior Dana Trivigno in front of the net. She converted to score BC’s second goal of the game, leaving the score at the end of the first period 2-0 in favor of BC.

Despite being up 2-0, one of the storylines for the Eagles in the first period was missed opportunites. They failed to convert on a number of promising chances that could have put away the Terriers in the early going. These missed chances would prove costly as the game continued.

The second period belonged to BU, and for perhaps the first time this year, the Eagles seemed human and beatable. The Terriers outskated and out-maneuvered the Eagles in a way that no other team has been able to this season.

The breakthrough for BU came as a result of a series of penalties which left them with a 55 second window of 5-on-3 play. With just eight seconds left to kill of the 5-on-3, BC conceded its first goal on a redirection by BU junior Sarah Steele into the corner of the net.

The goal reenergized the BU squad as it seemed to take control of play, maintaining possession and creating quality scoring opportunities that were previously absent. The team outshot the Eagles 13-8 in the period as it played with a renewed passion and improved execution. For the first time in the game, it looked like the Eagles were getting exasperated, as their attempts to build momentum proved unsuccessful time and time again.

A BC turnover at center ice with three minutes left in the period sparked a 2-on-2 break for BU. Burt saved the initial shot, but was beaten by BU junior Maddie Elia on the rebound for her eighth goal of the season. The goal notched the score even at 2-2 as the second period expired.

The Eagles started the third just as one would expect an undefeated team to do. They broke the deadlock and gained the upper hand just 1:20 seconds into the period on a shot from junior Kristyn Capizzano. The Terriers refused to go quietly, however, as they once again evened the score just 5:39 later. Senior Rebecca Russo beat Burt on the glove side to even the score at three apiece.

The Eagles showed real desperation for the remainder of the third period, as they controlled the puck for the vast majority of the remaining minutes. The Eagles rattled off 15 shots in the period compared to only seven for the Terriers. None of the shots were able to find the back of the net, however, and regulation proved unable to separate the two teams.

The Eagle’s sense of urgency was palpable as overtime began. The puck remained almost exclusively in the BU end, as the Terriers only managed a lone shot on goal that Burt deftly handled.

A bad turnover in BU’s defensive zone would prove to be the difference, as Carpenter picked off an errant pass and sent BU packing with a wrist shot past Hanson, sealing BC’s 12th straight win.

Although BC did not play to the best of its ability, head coach Katie Crowley expressed that she was happy to come away with a win. For a team that has consistently handled opponents well, this game marked the first time this season that BC had really been pushed to the limits. Crowley expressed that she is grateful for the team to have an experience like this under its belt.

“I think it’s good for our kids to be able to be in those situations and those positions,” Crowley said. “That to me was a playoff hockey game. It was nice to have our kids battle like that.”

Crowley lamented the missed opportunities that the team had, and isolated finishing those opportunities as an area requiring improvement as the team moves forward. Ultimately, BU exposed some weaknesses in the seemingly impenetrable BC armor, but in the end the Eagles garnered the result they desired.

alex carpenter katie crowley makenna newkirk
Big Boi Evolves From The Generic Party Rapper With “Fell In The Sun”
Comedy And Drama, Age And Youth On The Bonn Stage