Home » At This Semester’s BC Talks, Lessons On Life, Learning, And Aviation 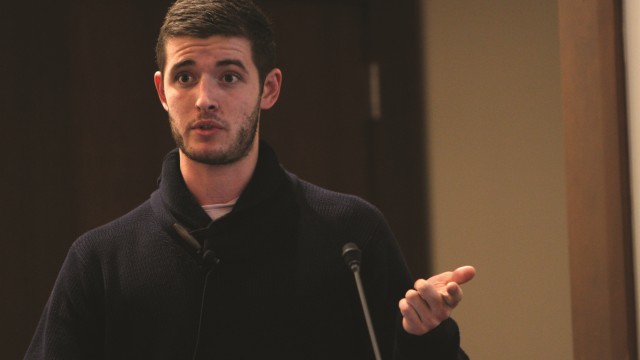 At This Semester’s BC Talks, Lessons On Life, Learning, And Aviation

On Wednesday night in Corcoran Commons, a senior revealed how spending time alone changed his life. A sophomore from East Palo Alto told how the economic boom of the tech industry around him has started to destroy his city. A junior vented her frustrations at the lack of mental health services available to her autistic cousin in Pakistan. These students, and six others, gave short lectures as part of this semester’s installment of BC Talks.

Launched in 2011, BC Talks are modeled afters TEDTalks. Speakers have about 15 minutes to present their topic of choice, the idea being that the talks are long enough to communicate complex ideas but short enough that several can be viewed in one sitting.

“This is addressed mainly to the girls in the room: people will judge you. Don’t be offended—just prove them wrong.”

Rutigliano, who earned her pilot’s license in July, told a story about when she flew with her father for the first time. When they landed, an airport worker assumed that her father was the pilot.

“Why would he expect that the 18-year-old girl, not the 47-year-old guy, was the pilot?” she said. “This is addressed mainly to the girls in the room: people will judge you. Don’t be offended—just prove them wrong.”

“We look away because we’re afraid to admit that ‘Drunk John’ is a part of me right now, walking to class,” he said. “We don’t want to admit that to ourselves.”

Genovese discussed the value of solitude when he recounted his experiences studying abroad in Ecuador last spring.

Davey’s talk, “A Layman’s Wisdom,” focused on the average person’s inability to take their own advice, whether due to laziness or hypocrisy. Before his younger sister began college this year, he gave her some advice that he had never actually followed himself: explore the city, and take classes that interest you.

Jesse Mu, MCAS ’17, Bradford Gerber, MCAS ’16, and Isra Hussain, MCAS ’17, each talked about the social applications of their scientific research.

Mu, a computer science major, the summer in Madrid, researching how algorithms can cluster data on Parkinson’s patients. He demonstrated how machine learning—the same techniques used by Google and YouTube to reach users with targeted advertising—can be applied to a theoretically infinite number of variables to better understand the effects of and solutions for diseases.

Gerber, a biology major, discussed reaction-time experiments that demonstrate the human subconscious acting before thought. Rather than worry that everything might be predetermined, Gerber argued that this theory can promote connectedness between all people.

Hussain argued for increased awareness of mental health issues on campus and in other countries.

“I’m not trying to be pessimistic here, but I just think it’s important to find what you love, and have your worldview crumbled by it,” she said. “Unless this generation starts thinking about sustainability solutions to [mental health issues], we’re going to have a lot of negative consequences.”

Gomes grew up in East Palo Alto, Calif., two miles from Facebook’s headquarters. He discussed how the proliferation of tech companies in the Bay area has resulted in higher home prices that drive out longtime residents and change the culture and feel of whole neighborhoods.

The Ellis Act, a state law that allows landlords to evict tenants to make way for development, has accelerated the gentrification process.

The final talk was by Nadirashvili, who immigrated to the United States from Georgia five years ago. Her talk focused on her experience as an immigrant, and how children of immigrants face greater responsibilities and have more to lose than their American peers.

“I’ve fallen in love with this country for the last five years, but I’ve also noticed some flaws with it,” she said.

When she arrived in the U.S., she was shy and didn’t speak English. She gradually realized that in order to be successful, she had to come out of her shell. She took the hardest possible classes, eventually rising to the top of her class and singing the national anthem at her graduation ceremony.

“As an immigrant kid, independence is kind of shoved down your throat early,” she said. “You’re ready for it when you get to college.”