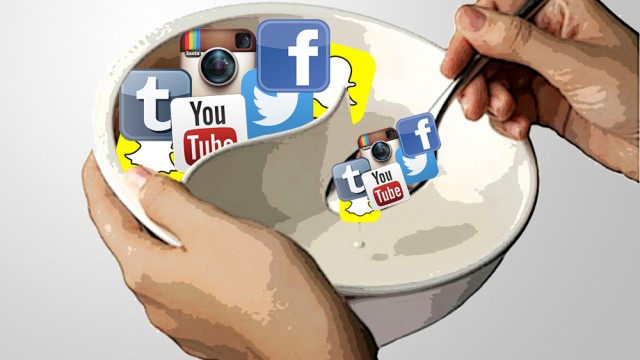 Social media can be toxic. Despite this common idea, countless people are hooked on every form of it: Facebook, Twitter, Instagram, Snapchat. As a notable social media guru, I always rolled my eyes at adults or pretentious kids who would scold people’s usage of social media.

“Instagram is stupid,” they’d say. “You’re not connecting with the real world.”

I never listened. I think social media is an amazing way to connect with people all over the world. It serves as a means of communication to keep in touch with old friends as well as new ones. It’s the perfect tool for self-expression. And for a long time, that’s what I used it for. I made jokes on Twitter, posted beautiful photos of nature and meals on Instagram, and shared thoughtful articles on Facebook.

But I slowly began experiencing the bad side of social media. It first occurred  at the start of freshman year of college. But now, over the past couple of months, I’ve particularly noticed how obsessive I’ve become about posts. Seeing group photos of gorgeous girls on Facebook or Instagram made me feel jealous, insecure, and inadequate. Just coming across a post on Facebook could ruin my entire night.

So I decided to take a break.

Recently, an Australian Instagram model named Essena O’Neill “quit social media” after recognizing that she had spent the majority of her teenage years obsessing over the life that was constantly projected onto Instagram. She edited each of the captions on her Instagram photos to say, “NOT REAL LIFE,” and explained the convoluted process behind each post. Although I agree with Essena O’Neill’s idea of distancing ourselves from social media, I’m not exactly aligned with her opinion that social media is bad.

Several days after O’Neill radically exposed the falseness of her Instagram photos, several of her friends (also Instagram models) came forward to criticize O’Neill. One of her friends said, “Instagram isn’t fake, you are.” This definitely holds some truth. Social media can be the perfect platform for displaying your incredible life. If you heavily edit your photos or straight-up photoshop them, however, you’re projecting an image of yourself that isn’t real. This is no fault of social media. This is your fault.

Social media needs to be used correctly. If you forget that people only post the highlights of their life on social media, if you find yourself obsessing over a photo that Jessica from high school posted exhibiting her amazing new body, if you’re only posting simply to impress people, it’s time to take a break. You need to recognize that other people view your social media profiles the same way you view theirs. You look like you have tons of friends and are having a blast. We need to recognize that social media doesn’t display the whole truth.

We can all benefit from taking a hiatus from social media. This is coming from someone who really thought it was pretentious and ridiculous to think yourself as above social media. I don’t think I’m above it—I just need to come back to reality for awhile. I wish I was level-headed enough to use social media, but right now, I’m just not. It can warp your perception of others and, worse, yourself. In taking a break from social media, you’ll find you’ll have more time on your hands, more confidence, and a less glamorous perception of your friends.

We should all consider putting a little distance between ourselves and our social media accounts, if not deleting our apps entirely for awhile. If you can scroll through your Facebook newsfeed and not feel even the tiniest pang of envy, more power to you. But for the rest of us, those types of negative feelings are simply not necessary. And, quite frankly, you won’t miss it nearly as much as you think you will.