Home » Men’s Hockey Hangs On to Take Down New Hampshire 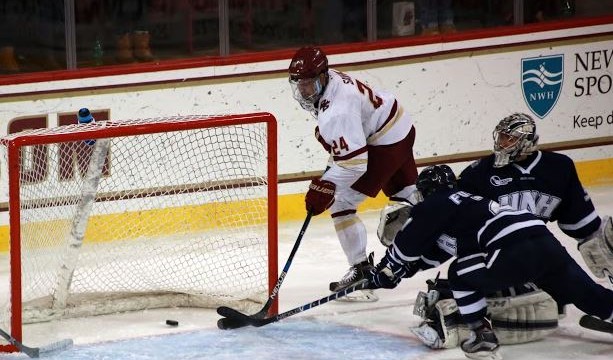 Men’s Hockey Hangs On to Take Down New Hampshire

Danny Tirone had just made a play that would make Martin Brodeur blush.

Boston College men’s hockey earned a man advantage after University of New Hampshire defenseman Richard Boyd forced the referee to raise his hand: two minutes for holding. Travis Jeke, however, kept the pressure on the Wildcats’ defense by keeping the puck in the offensive zone. The zebras allowed play to continue as the bench called Thatcher Demko back, giving BC a 6-on-5 advantage without any risk.

The Eagles passed it around a couple of times before finding Scott Savage wide open with nothing but twine in front of him. The junior, who doesn’t have the offensive prowess of some of BC’s other defenders—Savage has just five goals in three seasons and 100 games played with the Eagles—wound up, uncorked, and fired.

Tirone, a sophomore, has not impressed nearly as much as he did last season. In his freshman campaign, he posted a 14-6 record with a 2.14 goals against average and .924 save percentage—this year, the GAA has ballooned to 3.41 while the save percentage has dropped to .895.

But in a flash, he was there. Tirone leapt to his right to snatch Savage’s bullet out of the air to keep the game scoreless. The 5,043 faithful fans who braved the snow to come out and celebrate head coach Jerry York’s 1,000th win were so amazed, they actually booed that the video boards didn’t replay his save.

Then, all of a sudden, Tirone wasn’t quite as spectacular anymore.

After robbing the Eagles all game, Tirone (and his less-than-stellar defense) fell apart immediately following that SportsCenter Top 10-worthy play. And, in using every bit of its offense, the fourth-best in the nation, No. 5 BC (19-4-4, 11-1-4 Hockey East) skated past a scrappy New Hampshire team (9-14-4, 3-8-4) to stay undefeated since the calendar turned to 2016.

The Eagles came out hot in the first period, lofting up eight shots on Tirone in the first three minutes of the game, trying to exploit a defense that has disintegrated this year. In fact, it’s the sole reason why the Wildcats aren’t in the NCAA Tournament hunt. While they boast two of the nation’s top scorers—Andrew Poturalski and Tyler Kelleher—and have an attack that is ranked 12th in the nation (3.31 goals per game entering today), the Wildcats feature a defense that allows 3.42 goals, poor enough for 49th out of the NCAA’s 60 teams.

Even more challenging is New Hampshire’s attack when given a man advantage. Head coach Dick Umile’s squad scores on 25 percent of its power plays, sixth-best in the country. Not a good combination for the Eagles, a team with the most penalty minutes in the nation.

Yet, like they did in the Beanpot semifinal against Harvard, the Eagles’ penalty kill came up strong. Several defensemen, including Savage and Steve Santini, used the stick effectively to poke away breakaways from Kelleher and Poturalski. York mentioned this as a key to the team’s win, given that it’s one of BC’s biggest weaknesses.

“They created a lot of 3-on-2s,” York said. “I thought we weren’t structured enough on our forecheck, we got a couple of guys caught. […] We let them come out of the zone with odd man rushes.”

On the offensive side, Tirone kept the Eagles at bay, even during a two minute-long 5-on-3. But by the second, BC’s powerful offense broke through.

At 3:54 in the second, Austin Cangelosi took advantage of the power play that ensued following the body penalty. He grabbed a feed from Savage, poking it past Tirone to give BC an easy lead. Less than a minute after, first semester freshman Michael Kim rocketed a shot that rebounded off Tirone’s pads to Teddy Doherty. The captain dished it to Zach Sanford on his right, and the Eagles’ big man made Tirone pay. Using a couple of slick stick moves, Sanford smoothed the puck past Tirone’s left skate, giving a big fist pump to help BC get up 2-0.

But, as always, you can’t keep UNH down for long. Senior Kyle Smith poked the puck past Demko late in the second to cut the Eagles’ lead in half. Midway through the third, the nation’s leading point man finally broke through—Poturalski tied it up with about 12 minutes remaining in the second, in a game that suddenly looked eerily similar to BC’s third-period collapse to Notre Dame in early December.

But, as always, BC’s offense can’t be kept down for long either.

Kim notched his first career goal with a blast from the blue line to hand BC the lead once more and, as the Eagles did in the second period, they continued to score in bunches. A minute later, Adam Gilmour took advantage of an odd bounce off Chris Brown’s stick, wristing it just high enough over Tirone’s right shoulder to give BC a 4-2 cushion.

New Hampshire didn’t make that cushion so comfortable. The Wildcats answered with an onslaught, highlighted by a beautiful backhanded goal by Dan Correale to again half the Eagles’ lead. That would be all for UNH, though, as BC’s defense stood strong for the remainder of the game, even surviving a heart-palpitating final 10 seconds that featured a faceoff in BC’s own offensive zone.

After the game, Umile lauded his team’s effort in battling and coming from behind throughout. Yet he also understood the difficulty of what the Wildcats were up against, noting the performance of Demko and BC’s defense.

“We’re talking about one of the top teams in the country, and we’re going head to head with them,” Umile said. “We’re disappointed we’re not winning games, but it’s not for lack of effort.”

As York has often taught them, the Eagles are looking ahead to the next game. Of course, this is the biggest “next game” BC has had this season: the Beanpot final on Monday night against Boston University. But the way this team is playing, there’s no reason to be nervous. Just ask Michael Kim, the man who got on the scoreboard for the first time in his career tonight.

“[We have to] stick to what we do best,” Kim said. “If we use our speed, and make quick passes, and ultimately, I think, we have so much skill that if we do everything right, it’s going to be hard for us to lose.” 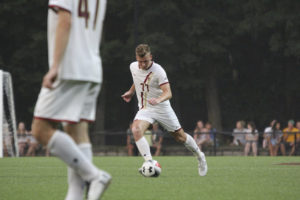