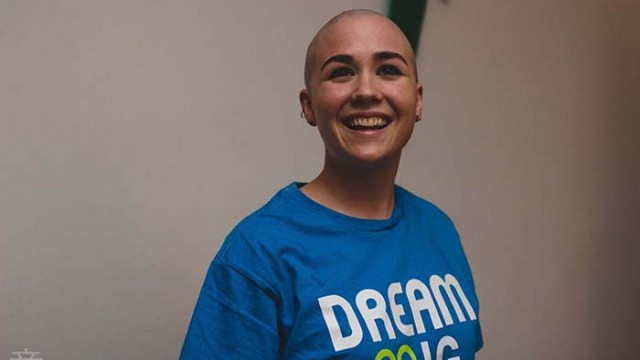 Jesi Watson passed away at the age of 16 after a hard, courageous fight against leukemia on Sept. 11, 2014. Her hometown of Lexington, Mass., was struck with multiple deaths around the same time. As a result, Lexington held several fundraisers for those who had recently passed away. Megan Vanderhooft, MCAS ’17, however, who was close friends with Watson’s brother and twin sister, noted Lexington’s neglect to remember Watson and her battle. Razor in hand and with friends to support her, Vanderhooft decided to take action and get involved with the St. Baldrick’s Foundation, at the expense of her hair.

“A lot of people were doing fundraising for other people who had passed away, but I realized that nobody had really remembered her,” Vanderhooft said, “She was very young, she was 16, and she hadn’t spent much time at the high school, and so I felt like just to put her name on it, to remind people of her, was really important.”

Starting its first year as an independent foundation in 2005, St. Baldrick’s Foundation was established for childhood cancer research funding. Participants set a goal for desired donations on their site, and if that goal is reached, the participants then shave their heads, in solidarity with those battling cancer. Anyone can sign up to become a “shavee.” Last year, close to $37 million in donations was raised through the foundation in total. This year’s running total is currently at around $2 million, $5,425 of which was raised by Vanderhooft’s efforts.

“I just want to say thank you for everyone who donated, for all the overwhelming support and kindness that only BC people can show. It’s been amazing, and I’m so grateful to have such generous and thoughtful people as my peers.”

During high school, Vanderhooft knew a friend who became a “shavee” after raising around $500. While Vanderhooft was impressed with her friend’s courage, it didn’t strike her as something she would participate in. After Watson passed away, however, Vanderhooft took action.

“I figured, if not now, when?” she said. “For me, I mean, it’s hair. It grows back, it shows solidarity, it raised a ton of money—$5,425, as of right now. You can still donate. It gives people something tangible for their donation.”

“When I saw that she was doing this, it was completely out of the blue, but it never struck me as something that she wouldn’t have done,” Nick Crain, CSOM ‘17, a good friend of Vanderhooft’s since freshman year. “So we went to her house on a Saturday, had some brunch, and then shaved her head.”

In March, St. Baldrick’s offers events for shavees to gather for a collective, public shaving. Vanderhooft decided to instead make her shave of solidarity more personal. She invited all who had donated to cut her hair with her on Jan. 16, 2016, a nod to Watson’s age when she passed away. Vanderhooft couldn’t wait until March. Surrounded by her Frisbee teammates, who had all come back to campus a week before Winter Break ended, Vanderhooft sat in front of a wall plastered with St. Baldrick’s postcards that were sent to her. She put her hair into a ponytail and handed her roommate, Alyssa Florack, MCAS ’17, a pair of scissors.

“I donated early, so she actually let me be the one to cut her ponytail off,” Florack said. “Pretty much everyone there got a couple cuts.”

Normally, St. Baldrick’s staff takes the buzzer to the head and finishes the shave quickly. Vanderhooft and her friends took their time and had fun with it, she said. After the ponytail, which was being donated to Pantene Beautiful Lengths, Vanderhooft’s friends took turns taking cuts at her hair. Vanderhooft went through rocking an uneven bob, a Mohawk, and then finally, she was bald.

“No hair, don’t care,” Vanderhooft said. “Or, wait, no hair, do care, because I care about raising money.”

The intimacy of doing a private event, surrounded by her close friends and Frisbee teammates, made for a more personal tribute to Watson’s death than a formal St. Baldrick’s event, she said. Vanderhooft’s shaving day was captured on a time-lapsed video, which St. Baldrick’s later posted on its instagram account. St. Baldrick’s had been incredibly helpful, encouraging, and accessible throughout the course of her journey to becoming a “shavee,” Vanderhooft said.

“I just want to say thank you for everyone who donated, for all the overwhelming support and kindness that only BC people can show,” Vanderhooft said. “It’s been amazing, and I’m so grateful to have such generous and thoughtful people as my peers.”