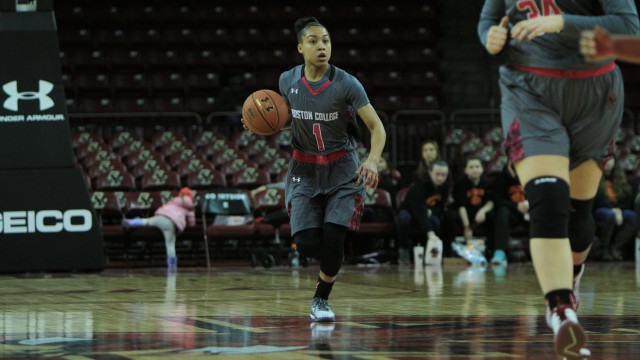 Once again, Boston College women’s basketball did what it does best on the offensive side of the ball: share it. Of the 23 baskets the Eagles scored Thursday night, 17 of them came off assists. BC (14-12, 2-11 Atlantic Coast) are strongest when the team plays together, proving it as the Eagles downed the Clemson Tigers (4-22, 0-13) by a score of 67-64.

The Eagles got off to a quick start, scoring the first five points of the game, including a 3-pointer from Kelly Hughes. Her 3-pointers were a theme of the game for BC, as she led the team in points and hit five 3s over the course of the game. Clemson came back with a run of its own, scoring seven straight. The Eagles brought it back at Clemson with baskets on three straight possessions, all off assists. One of those baskets was a 3-pointer by Nicole Boudreau, Hughes’ shooting counterpart, and two of them were layups from Mariella Fasoula. Emilee Daley, who has not contributed as much this season as she did last year, was much improved in the first quarter. With the lead 12-7 in favor of BC, Daley was a part of the next four made field goals for the Eagles, notching a 3-pointer and a layup in addition to two assists. After two free throws from Fasoula, the Eagles closed out the first quarter up by 12.

In a tough season, Nelly Perry has been a bright spot for the Tigers. She was at it again against BC, especially during the second quarter. She scored the first four points of the frame, totaling 15. But that was all Clemson scored in the quarter, and despite its best efforts, BC still led by 10 going into the half.

With the help of Perry’s teammates, the ACC-winless Tigers got going in the third. Victoria Cardaci hit two layups right after the break, and, along with a layup and jumper by Perry, the Tigers cut BC’s lead to two. It wasn’t the Tigers’ offense, but their defense that helped spur a comeback in the third quarter. It forced three turnovers and didn’t allow a second-half field goal until the 5:13 mark, when Hughes hit a 3-pointer off a pass from Kailey Edwards.

A Fasoula layup followed by two free throws and a “dagger” 3-pointer by Hughes put the Eagles up nine to start the fourth. At the time, it seemed like a nail in the coffin, but Clemson impressively refused to quit on the game. Even when BC stretched the lead to 11, Perry and Cardaci kept their team in by scoring big buckets. The Tigers stormed back, finally evening up the Eagles.

Head coach Erik Johnson called a timeout to draw up a play for his star player, Hughes. Right out of the timeout, BC got Hughes an open look from beyond the arc that she drained, a true dagger. For the remainder of the game, BC kept Clemson just out of reach for its second ACC win of the season and the first on the road.

Hughes, Fasoula, and Daley were the three top performers in this one. Hughes scored a total of 21 points on five 3-pointers, all while chipping in a team-high seven rebounds. Fasoula was the consistent player that she seemingly has been for weeks now, scoring 16 points and snagging four boards. But Daley was an X-factor off the bench, scoring 10 points and making key contributions throughout the game.

While Clemson is the bottom team in the ACC, any conference road win for the Eagles is huge, and this one goes a long way in showing that the consistent effort by BC is starting to pay off.

clemson kelly hughes emilee daley mariella fasoula nelly perry
A Year On From Fatal Shooting, Boston Hospitals Still Debate On the Appropriate Course of Action
Previewing BC Hockey: What to Expect From Vermont