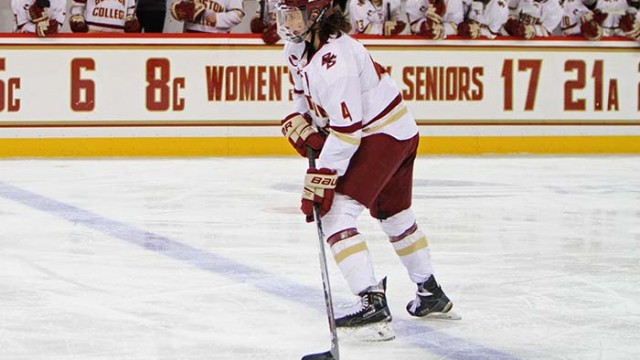 Four current members of Boston College women’s hockey will represent the United States at the International Ice Hockey Federation (IIHF) world championships this year. Sophomore Megan Keller and seniors Alex Carpenter, Haley Skarupa, and Dana Trivigno will leave the Heights and travel to Canada for the event, which takes place in March and early April.

Carpenter was first named to the U.S. National Team three years ago. During that span, she played in the Sochi Olympic Games, winning a silver medal, and served as the assistant captain in 2015 when the team won the World championships. As a junior, she won the prestigious Patty Kazmaier Memorial Award. In her senior campaign for the Eagles, the forward has tallied 38 goals and 38 assists for 76 points.

Keller, a defenseman, won a silver medal representing the United States on the U18 team at the 2014 IIHF championships. So far this season, Keller has netted 12 goals, including two game-winners, and recorded 32 assists for a total of 44 points. She is the nation’s leading scorer among defensemen.

Trivigno is the third forward from BC to represent the U.S. in the World championships. Her 43 points this season have come in the form of 15 goals and 28 assists. Her hat trick against Northeastern in the women’s Beanpot final helped propel the Eagles to win the tournament.

In addition to Keller, Carpenter, Skarupa, and Trivigno, two BC alumnae will represent the U.S. in Canada. Defenseman Emily Pfalzer graduated last year and won a gold medal at the 2015 IIHF championships. She currently serves as the captain of the Buffalo Beauts in the National Women’s Hockey League (NWHL). 2011 graduate Kelli Stack, a forward, won silver medals with the national team at the Vancouver and Sochi Olympic Games. Stack has played in four IIHF championships over her career, winning three gold medals and one silver medal. She plays for the Connecticut Whale of the NWHL.

The six current and former Eagles will join other notable names on the national team. Northeastern’s biggest threat, Kendall Coyne, is also on the roster. Michelle Picard, Brianna Decker, and Hilary Knight will also represent the U.S. at the tournament.

The tournament kicks off for the Americans on Mar. 28 when they take on Canada in a rematch of the Sochi gold medal game. March 29 and Mar. 31 will see clashes with Finland and Russia. The gold medal game, should the U.S. qualify, is April 4. The entire IIHF tournament schedule can be found here.