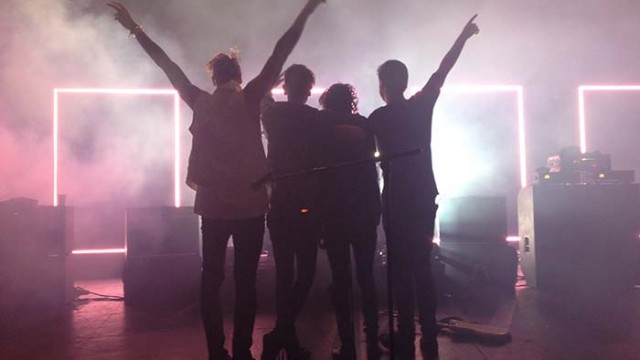 The 1975 continues to carve its own path through the music industry with the release of its music video for “The Sound,” a track off of its latest album I Like It When You Sleep, for You Are So Beautiful Yet So Unaware of It. The band, dressed in all black in a glass box, is encompassed by darkness and a few stray pink lights. As the song starts, lights from within the box bathe the band in a pink light. From the onset, the video progresses rather simply, as it displays the band performing from within the box with ample energy. Sporadically, it cuts to interesting shots of the box filled with pink fog, hands pressing from the inside, and variously angled shots of the band and instruments.

The video becomes infinitely more interesting as outsiders clad in all white come into the frame and begin to look at the band in the box. They begin pointing, grimacing, and looking on with apprehension. The metaphor the band is going for becomes more clear from this point on. The band, dressed in all black in a box, contrasts directly with its puritanical critics outside of it. The video continually flashes pink title cards with some criticisms of the band like, “Do people really still make music like this?” and, “They’re essentially making robotic Huey Lewis tunes.” This continues until the beginning of the guitar solo, which finds the band on the outside, looking into the box full of pink fog. Emerging from the fog at the first strum of the solo, the critics now find themselves encased within.

The band seems to take criticism of its music in stride, incorporating it to make a statement about the members’ indifference to such words. Putting the band in the box is really no use, as it makes a show of it anyway. Though the metaphor is simple and its presentation isn’t terribly imaginative, the video and its music prove that the band is not simply the derivative bubble-gum pop manufacturer that its critics purport it to be.

the 1975 the sound
Bob Saget, Boston Ballet, and Sing It To The Heights This Weekend in the Arts
‘Whiskey Tango Foxtrot’ Satirizes, Scrutinizes the War in Afghanistan