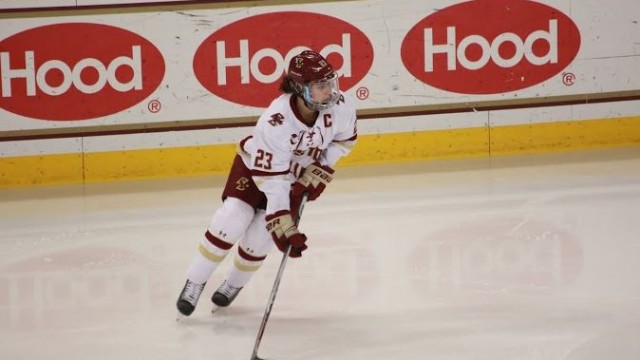 Eagles Advance to Hockey East Finals With Win Over UConn

When Boston College women’s hockey wins, it’s never just because of one person.

Take Friday night for example, when the Eagles (37-0-0, 24-0-0 Hockey East) attended the Hockey East Banquet. Seven team members earned praise in the form of awards or honorable mentions, and head coach Katie Crowley came away with her fourth Coach of the Year Award. Alex Carpenter, Haley Skarupa, Megan Keller, and Lexi Bender were named All-Star First Team members, while Katie Burt and Dana Trivigno notched honorable mentions for the All-Star team. Makenna Newkirk was awarded Rookie of the Year for her 21-goal and 26-assist season.

So it was no surprise that when the Eagles hit the ice for the weekend at the Hockey East Semifinals at Lawler Arena in North Andover, Mass., they would win 4-2 against the University of Connecticut, with all four goals scored by four different players. The Huskies (18-14-5, 11-10-3) fought back in the middle of the match, but handed the game over to the Eagles by the third period.

BC had trouble finding the back of the twine in the beginning of the first period, taking 26 shots before the red light went off. After Lexi Lersch was sent to the box for interference, the Eagles took 20 seconds to convert on the power play. Hockey East Rookie of the Year Makenna Newkirk came in as the fourth forward and passed the puck off to Carpenter, who passed it from behind the net to Skarupa. Skarupa blasted the puck from between the circles, and it landed in the bottom right corner of the net, leaving goalie Elaine Chuli staring at the space between her leg and the right pipe.

The Eagles went cold after the goal, and went into the first intermission up just one goal despite another barrage of shots. Seven minutes into the second period, Meghan Grieves hit her offensive stride on the third line. While the Huskies were in BC’s defensive zone for a faceoff, Grieves swiped the puck in an opportune moment and streaked down the ice, out-skating every UConn player on her way to beat out Chuli. She shot five-hole for her 11th goal of the season.

The Huskies started to give BC a scare when they added their own goal to the board. Theresa Knutson stole the puck from the Eagles and broke away from the pack, launching it above goalie Katie Burt’s left shoulder. Her glove grab couldn’t stop it from hitting twine with enough force to rebound it out of the net.

Neither team could contribute another goal to the score until the third period, when the Huskies tied it up less than one minute in. Justine Fredette evaded Toni Ann Miano and Kali Flanagan and put the puck in the net while nearly sliding into Burt, causing the goalie to fall and stretch her arm out to try and make the save.

BC got back on top during a power-play opportunity, with captain and Patty Kazmaier Award finalist Carpenter nailing a goal for the Eagles. Kenzie Kent passed the puck to Carpenter, whose first shot didn’t make it in, but when it bounced off Chuli, Carpenter made do and slipped it past her to give the Eagles the lead.

Minutes later, Kristyn Capizzano added her own goal to seal the win. Seconds before another power play was to expire, Grieves tried her hand at a shot, but was unable to connect with the back of the net. Capizzano found the puck and shoved it past Chuli, celebrating her eighth goal by jumping up and down while pumping her fist and kicking up her leg.