Home » Under the Features Desk, A Liberal Arts Education in the Bag 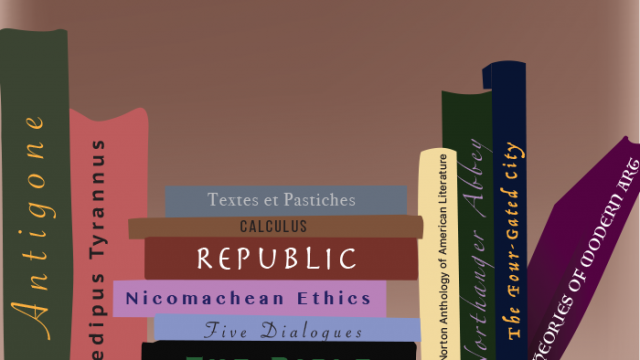 Under the Features Desk, A Liberal Arts Education in the Bag

If you want to learn about what makes us human, open a book. Books chronicle our progress through time, recording our unique stories, cultures, and ways of thinking for posterity. Several influential texts have not only guided Western thought, but also laid the foundation for a liberal arts education. For the entirety of the semester under our desk here in the Heights office, an unclaimed canvas bag has been hiding, completely untouched and unopened. Upon some further investigation, we found that the bag contains several brand-new books—though neglected books from a wide range of academic disciplines. After a bit of pondering, we came to the conclusion that the random sample of books found in this bag is an apt look at an average variety of books that a Boston College student might encounter—something of a liberal arts sampler. We decided to finally go through them one by one and see how each one contributes to painting a comprehensive picture of BC’s liberal arts education.

It was freshman year all over again.

Oedipus Tyrannus, Antigone, the Five Dialogues, and the Nicomachean Ethics formed a small pile on top of the desk.

The names Sophocles, Plato, and Aristotle brought up memories of sitting around a table with my classmates and discussing the nuances of each text as if we were Greek philosophers ourselves. While freshman year is all a blur to me now, it was recent enough that I can recall memories of when everything was still shiny, new, and terrifying.

Though I was never one for philosophy, for the time I sat around that table I came to appreciate the importance of conversation and other ways of thinking. My personal copies of those Greek texts take up an entire bookshelf in my room back home. I can’t bring myself to let go of the memories of that formative period of my life associated with those books. I’ve never bothered to re-read them, though—at the end of the day, it’s all Greek to me.

I reached back into the bag and picked up a heavy tome, weighed down with the authority of the Word of God. Of course the Bible had to be in there. After 16 years in Catholic school, I’m pretty sure I learned a thing or two about the Bible.

Catholic Bibles are marked with imprimaturs, stamps of approval from a bishop or other high-ranking clergy member indicating that the Bible has been published in accordance with Catholic teachings. The New Oxford Annotated Bible carries no such distinction as an ecumenical study Bible, but even though it’s not explicitly Catholic, the lack of an imprimatur makes it universal in a refreshingly unique sense of the word.

I chuckled when I saw a calculus textbook in the bag. The fact that it was the only hardcover in the bag seemed to make a statement about the importance of calculus in one’s education. It’s interesting how only a handful of definite equations can quantify rates of change.

Calculus is the gateway to many careers in the similarly dynamic fields of science and technology, and it’s only after becoming fully immersed in my science classes that I’ve been able to go back and appreciate the simultaneous simplicity and complexity of calculus. Like it or not, calculus will always be an integral part of science.

The gleaming cover of Plato’s Republic now stared up at me from the top of the pile. It’s almost impossible to make it through a liberal arts education at BC without reading the Republic and pretending to know what the Form of the Good is.

A year later, I still don’t know what the Good is, and I may never understand what it means to be just, but I guess that’s exactly why I’m here in the first place, looking for answers as I stumble my way out of Plato’s cave.

If my freshman year taught me anything, it was that in order to grow, you first have to hit rock bottom. We resolved to go deeper into the cave to see what other books were lying in wait.

First impression upon pulling up Texte et Pastiches—une initiation á la littérature? Yikes. Personally, I have no academic experience in the French language, and my incompetence of the French language, despite eight years of studying Spanish in high school, is extensive to the point where I needed to use Google translate to decipher the title—it’s roughly, “Text and Pastiches – an Introduction to Literature,” if you were wondering. Looked at broadly though, I think that the study of language is essential to the liberal arts. Formally a student of Spanish and currently a student of German, studying language is more than just learning how to speak a foreign tongue. It’s a means of discovering a new world outside of your own and learning how to interact with that new world on cultural and linguistic levels. Looking back at my own experiences studying language and now leafing through the indecipherable pages of this book, it’s clear that there’s a little more to it than flashcards and conjugations. It’s a cultural exploration which makes us better as humans, and if that thought doesn’t just wreak of liberal arts, then I don’t know what does.

The next book was a welcome relief, a liberal arts classic: a Norton Anthology on American Literature. Though notorious back-breakers, Norton Anthologies are a staple in English Literature and related disciplines, filled with classic stories and insightful essays that provide a variety of perspectives and readings on the most important and significant ideas in each specific field. In a variety of ways, this model of analysis, multi-perspective discussion, and criticism is much like this liberal arts approach to education we’ve all encountered. To look at a broad spectrum of literature, encourage discussion of differing opinions, and synthesize new ideas is, in itself, a demonstration of the broad spectrum of exposure that studying the liberal arts encourages.

Right as things were looking positive, the next book up is Jane Austen’s Northanger Abbey. But what is an education if it simply consists of the flowery stuff? Without delving too much into plot, Northanger Abbey, like many Austen novels, is a dark exploration of Gothic obsession and maturation into adulthood. In this same vein of well-roundedness, scrutinizing a wide variety of movements in each field of study adds a level of diversity to education. To be excessively singular in thought and experience is a dangerous thing, and the mission of the liberal arts education is highly geared toward avoiding this threat of the single narrative. It’s a positive thing that our mystery student is mixing his or her calculus with a side of American Gothic literature—it’s an eclectic mix that makes for a multifaceted individual.

The final book in our mini collection actually made total sense to me—we had explored philosophy, religion, calculus, language, and literature, so what pursuit should follow to round out the pack? Art. A dense paperback with the informative title Theories of Modern Art runs through the various movements and time periods of which modern art is composed. Opinions with regards to modern art certainly have varying degrees of approval, but it is undeniable that it is a part of the human discourse. To neglect the importance of visual art would be to overlook a huge part of the human experience and to fail to align with the philosophy of the liberal arts. 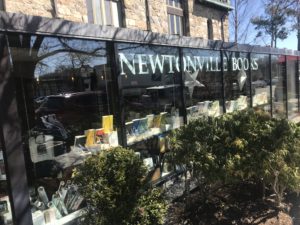