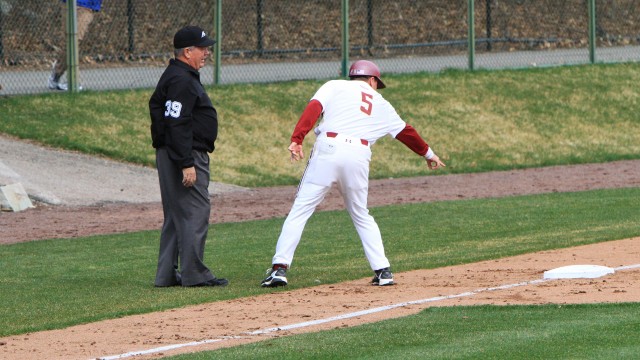 After Florida State took a 1-0 lead in the fifth inning, Boston College catcher Nick Sciortino punched back, scorching a line drive down the right-field line for a double to begin the bottom of the fifth inning. The hit energized the Eagles, providing hope against one of the best teams in the country.

The next play, however, sent head coach Mike Gambino and the Eagles bench into a frenzy. The leadoff hitter, Jake Palomaki, sent a bunt down the third-base line that pitcher Mike Compton fielded and fired to third baseman John Sansone. After Sansone sold the play and recorded the out, Gambino furiously chewed into the third base umpire. He obviously disagreed with the questionable call and let the umpire hear about it for a few tense minutes as the Eagles faithful let out roars of disgust. The next batter, Joe Cronin, flied out to right field on a play that would have easily scored Sciortino from third base to tie the game, further antagonizing the Eagles.

“It’s a tough one,” Gambino said. “You saw the discussion that I had with the umpire afterwards. I obviously disagreed. It could have gone either way. That’s one of the ones you wish you could look on replay. It didn’t end up costing us the game, obviously.”

No. 7 Florida State (19-6, 7-1 Atlantic Coast) sent its ace, Mike Compton, to the mound in the first game in a three-game series in Chestnut Hill. The senior entered the game with a 3-1 record in six appearances. The Eagles (14-10, 3-7) countered with the team’s own ace, Mike King. Yet, while the junior pitched well, it wouldn’t be enough in a 3-0 BC loss.

Unsurprisingly, this game was a pitcher’s duel, with both aces allowing contact but efficiently recording outs. Both starters recorded only one strikeout, but they kept their pitch counts in good shape and trusted their defenses to make plays. Compton lasted five innings after throwing 69 pitches and surrendering only three hits and three walks. King allowed the Eagles bullpen to rest for longer, recording all but two outs after tossing 101 pitches.

The Seminoles had the first opportunity of the game to score and it came in the third inning, as the team had a runner on third base with two outs. To keep the game scoreless, shortstop Johnny Adams nabbed a tough chopper, and first baseman Mitch Bigras scooped the throw out of the dirt to record the final out of the inning. BC’s first legitimate chance at a run came in the fourth inning, as the Eagles had the bases loaded with two outs after one single and two walks. The rally ended with a soft ground ball up the middle that Florida State shortstop Taylor Walls handled with ease.

Starting pitchers usually have more trouble later in the game because batters have had a couple opportunities to see what the pitcher is throwing and make adjustments, and that was the case in this game. Both teams posted exciting fifth innings as each hitter faced the starting pitcher for his second or third time. Florida State got on the board first due to a two-out rally. As King looked to record a 1-2-3 fifth inning, Matt Henderson laced a ground ball in between the first and second baseman. Bigras managed to glove the ball, but he could not complete the toss to King, as the speedy Henderson pressured him into releasing the ball quickly. Walls made the Eagles pay—he lined a ball deep into left center for a double, allowing Henderson to score from first base. In the bottom of the fifth inning, the Eagles nearly responded, but the controversial call hampered the team’s efforts.

After that heartbreaking fifth inning, the Eagles could not muster another hit for the rest of the game, and Florida State relief pitchers Jim Voyles and Tyler Warmoth dominated for the final four innings. The Seminoles added two insurance runs in the ninth inning after doubles from Jackson Leuck and Ben DeLuzio and an error by Cronin.

The Eagles will face the Seminoles again on Saturday, and Gambino comically stated that the revised game plan was to “score more runs.” As for King, he’s still proud of his team’s effort, yet knows that the Eagles will need more of it going forward.

“I think we set the tone that we are not going to go away easy and it’s not going to be an easy series for them,” King said. “They are obviously a great team so they can win on talent alone … we just have to keep firing at them.”