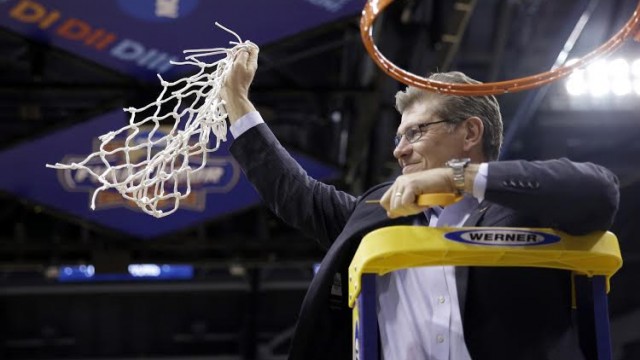 Every time I rewatch The Office, I tell myself that I won’t get upset at Steve Carell’s departure. Every time I rewatch The Office, I get exceedingly upset and emotional when it’s time to say “Goodbye, Michael.” At this point, I’m not even surprised. I know for a fact that it’s going to upset me. In a similar way, UConn dominating women’s basketball is not a surprise to anyone anymore. In a development that shocked absolutely nobody, earlier this week the Huskies defeated Syracuse, 82-51, to win their fourth consecutive national championship and their 11th in Geno Auriemma’s 31-year stint as head coach.

UConn is synonymous with domination in women’s collegiate basketball. The Huskies have set three win-streak records since 2000—they won 70 straight games in the early 2000s followed by an astounding 90 straight from 2008-2010. The 90-game streak snapped the previous record of 88 games established in the 1970s by John Wooden’s UCLA teams. After this year’s national championship, they have won 75 games in a row.

If that wasn’t enough, UConn’s perfect 38-0 campaign marks the sixth time it has gone undefeated during Auriemma’s tenure. Overall, Auriemma has guided the Huskies to 11 national championships since 1995. To quote my eternally wise and wonderful grandfather, “UConn is to women’s basketball as the Yankees were to old-school baseball.”

With this much dominance, it’s easy to see why some people believe the Huskies are bad for women’s college basketball. When the margin of victory is more than 40 points on a consistent basis, it opens the door for claims that UConn is turning people off of women’s college basketball. This year alone, the Huskies defeated their opponents by an average of more than 41 points per game. Their closest margin of victory was 10 points against both Notre Dame and Maryland. Blowouts breed disinterest, people might say. Nobody wants to watch a game when he or she already knows how it’s going to end, because that takes the fun out of it. Boston Globe columnist Dan Shaughnessy argued this point—first in a tweet and then in a column.

UConn Women beat Miss St. 98-38 in NCAA tourney. Hate to punish them for being great, but they are killing women's game. Watch? No thanks

Shaughnessy conceded that the Huskies play pure basketball better than anyone in history—the type of basketball, as he says, that the legendary Red Auerbach preached. But he believes that their dominance has created unwatchable games and an unstoppable dynasty with absolutely no rivals across the country. This is wrong.

UConn is still very much watchable, and the numbers prove it. According to ESPN, this year’s Women’s NCAA Tournament has seen ratings jump by 46 percent compared to last year. On average, 108,000 more people watched each game of the first two rounds this year. UConn has dominated throughout this season and the tournament. If UConn was hurting women’s college basketball, then the ratings wouldn’t be improving so much, plain and simple.

And on the rivalry question? Stanford, Tennessee, and Notre Dame each have heated rivalries with the Huskies. Stanford was the school that ended the Huskies’ historic 90-game win streak back in 2010. In 2014, Stanford snapped another UConn streak, this time at 47 games, with a thrilling 88-86 overtime victory. The Cardinal and the Huskies meet every regular season for a rivalry game. Tennessee and UConn also have a rich history. The two teams duked it out for the national title four times, with the Huskies triumphing each time. And Notre Dame and UConn have met six times in the Final Four, with the series split at three apiece. The Huskies also defeated the Irish in the national championship in both 2014 and 2015.

So Shaughnessy is wrong. Sure, I’ll concede that competitive games are really fun to watch—like Villanova’s buzzer-beater victory in the men’s national championship earlier this week. Even so, UConn women’s basketball is far from the worst thing for women’s college basketball. In fact, I firmly believe that the Huskies are the best thing for the sport.

Think about it. Would anyone—anyone—be talking about women’s college basketball without UConn’s dominance? The answer is no. It’s a harsh truth, but it’s a truth all the same. Just look at the WNBA. It doesn’t have one team consistently blowing everyone else out of the water, like UConn does, and nobody talks about it. According to a report, attendance at WNBA games dropped by 3.4 percent this year to the lowest point in the league’s history. At the end of last summer, NBA Commissioner Adam Silver admitted that TV ratings and attendance were below the ideal target. I’d love it if people paid more attention to the WNBA, but there’s just no interest in the league. This suggests that women’s sports need dominance or else nobody will pay attention. And if you don’t believe me, I have plenty of examples.

I’d argue that the two most popular women’s sports in this country are soccer and tennis. The U.S. Women’s National Soccer Team (USWNT) has absolutely dominated on the international stage recently. In case you were living under a rock last summer and didn’t hear, the team beat Japan and won the World Cup. Four years ago the team was the gold medalist at the London Olympics. Five years ago the team nearly won the world championships but lost in heartbreaking fashion—to Japan, no less—in the World Cup. (Speaking as a goalie, penalty kicks are the worst, you guys.) And the Americans also triumphed at the 1991 and 1999 World Cups.

I don’t hear people complaining about the USWNT dominating on the international level. I don’t hear critics arguing that Serena Williams’ success is bad for tennis. Even those who claim that her attitude detracts from the sport can’t deny the numbers. Fans were so excited at the thought of witnessing Serena completing a calendar Grand Slam that the Women’s U.S. Open final last year sold out before the men’s for the first time ever. One of the major criticisms leveled against UConn is that its games aren’t even close. But the United States scored four goals on Japan in 16 minutes in last summer’s World Cup final, and Serena routinely destroys her competitors. It doesn’t affect whether or not people are willing to watch them. So if the two most popular women’s sports include historic dominance, that should tell us something. When it comes to women’s sports, it’s very clear that dominance is what draws interest.

People—not just UConn fans—pay attention to the Huskies. They tune in to see the unbelievable performance Auriemma’s squad will give. They marvel at senior Breanna Stewart’s stats and stature—she has a wingspan longer than LeBron James’ while standing a full four inches shorter.

How she's been so effective for UConn: https://t.co/7SNVfCJhen

And UConn is more than just a national powerhouse—it’s an example to young female basketball players everywhere. The Huskies offer heroes to youth players all across the country. Some of the most famous WNBA players are UConn products, including Diana Taurasi and Tina Charles. Stewart is almost certainly going to be the next WNBA star, and is already the champion of women’s collegiate basketball. This year she was named Player of the Year by the Associated Press for a record third time. It was the first time in history that a player was unanimously voted to win the award. If that wasn’t enough, she has won the Final Four Most Outstanding Player award a record-setting four times. Nobody, male or female, has done that in college basketball history. Just as tennis needs Serena Williams to be the iconic female figure, women’s basketball needs UConn to provide the heroes.

Shaughnessy, then, is wrong. Women’s sports aren’t as inherently popular as men’s sports. Evidence suggests that dominance is needed for people to pay real attention to women’s sports. UConn, then, is the best possible thing for women’s college basketball. When UConn dominates, it makes headlines. When the Huskies run their opponents out of the gym, people talk about it. Not everyone is happy about it, but that’s all right. Not everyone was happy about Wooden’s UCLA teams, either, but people managed to survive anyway. I’m sure they can now, too.