Boston College football returns from Ireland seeking greener pastures as it takes on the University of Massachusetts at Gillette Stadium on Saturday. UMass (0-1) will provide the perfect opportunity for the Eagles (0-1, 0-1 Atlantic Coast) to rebound and move past the disappointment that they experienced last week against Georgia Tech.

The key to Saturday’s affair for BC will be getting off to a strong start and putting points on the board early. The Eagles must come out flying to prove to fans that they are not jetlagged from the trip across the pond. BC failed to score against Georgia Tech in the first half, with turnovers plaguing several solid offensive drives. If the Eagles come out in a similar fashion, it may prevent them from getting the momentum they will need.

In recent years, UMass has severely struggled in the second half of games due to a lack of depth on many parts of its roster. In 2015, the Minutemen were outscored 122 to 35 in third quarters, as they won just three games. BC head coach Steve Addazio will likely prepare for this by using running backs Jonathan Hilliman and Myles Willis to wear down the UMass defense and put together some longer possessions early on. In 2014, when the Eagles last met up with the Minutemen, they led just 6-0 heading into the half, before exploding to a 30-7 victory. In that contest, the Eagles rushed for 338 yards on 61 carries, and scored on four of their five drives in the second half. Addazio used the rushing game to set up his passing attack, as quarterback Tyler Murphy had a tidy stat line of 17-for-24, with 173 yards.

On defense, look for defensive coordinator Jim Reid to stack the box as BC tries to slow down the Minutemen’s dangerous sophomore running back, Marquis Young. Against Georgia Tech, the Eagles’ front-seven dominated the line of scrimmage as Georgia Tech’s triple option managed to produce just 119 yards on the ground. If BC can replicate its effort from Week One, it should have no issues dominating UMass’s offensive line and getting to Young. Slowing down UMass’s rushing attack will put pressure on the Minutemen’s brand new starting quarterback, redshirt sophomore Ross Comis. He debuted last week—his second career start—with a a 9-for-17 performance with 141 yards and no touchdowns or interceptions in a  24-7 loss to Florida in Gainesville.

While BC’s rushing defense looked quite impressive against Georgia Tech, the secondary was at times weak against the Yellow Jackets’ passing game, especially down the stretch. This is one of the plagues of the triple option that the Ramblin’ Wreck runs: prepare too much for the run, and get burned by the pass. If BC’s secondary can maintain the level it was at last year—it was the seventh-best passing defense in the country per yards per game—UMass, a traditional-style offense, will struggle mightily to move the ball through the air with its inexperienced quarterback and depleted receiving corps that lost five of its six top performers from last year.

Week Two will provide an enticing opportunity for BC to pick up its first victory since last September against Northern Illinois. Though the Eagles made strides, they still managed to lose a close game and remain winless in the ACC. BC needs to buck the trends and habits that haunted it last season if it wants to generate momentum moving forward, and UMass must be a convincing victory. 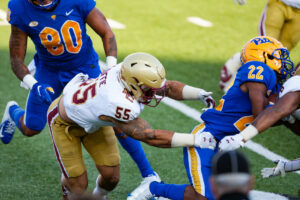