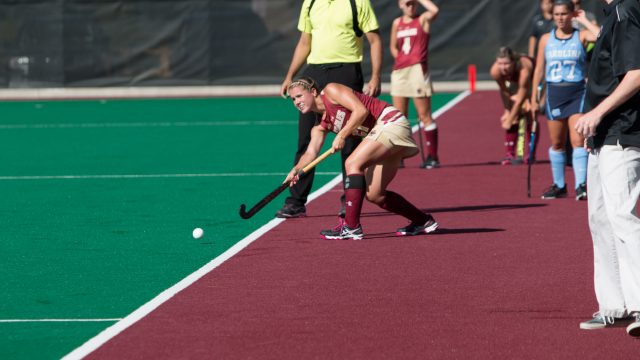 McCoy Sisters Combine For Four Goals in Win Over Northeastern

After playing five consecutive games against ranked teams—a stretch completed with a 2-3 record—a dominant win against Northeastern University is exactly what the doctor ordered for Boston College field hockey. The Eagles (4-3, 1-1 Atlantic Coast) exploded in the second half en route to an easy 8-1 victory over the Huskies (4-2, 0-0 Colonial Athletic).

Though they headed into halftime with only a one-goal advantage, BC beat Northeastern in every major statistical category. The Eagles had more shots, shots on goal, and corners attempted than the Huskies.

It was the second career hat trick for both McCoy and Sheehan, as well as the first of the season for both.

BC’s all-time record against Northeastern is still below .500—the Huskies still hold a 17-13 advantage—but the Eagles have been nothing short of dominant in the past two meetings. BC has won those games by a combined score of 14-2.

After struggling in road contests against No. 16 Northwestern University, No. 6 University of Maryland, and No. 1 Syracuse University, the Eagles have remarkably righted the ship. BC topped No. 10 Stanford University to cap off its road swing, then defeated No. 3 University of North Carolina to snap a streak of eight consecutive UNC victories in their series.

The Eagles lacked firepower in each of their defeats during that stretch, scoring only three goals in those losses. With an eight-goal outburst against Northeastern, the Eagles ignited an offensive spark that could pay dividends in the coming games.

So hold the Hatfields—the Eagles have two McCoys, and they’re on fire.