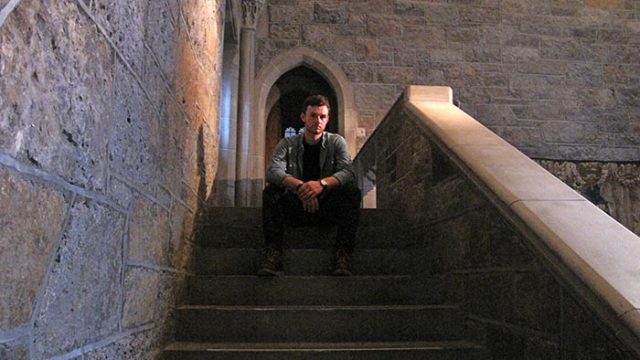 Walk into Ryan Bradley’s, MCAS ’18, room and you’ll find a haven of musical feng shui that every musician strives to create. The room, strewn with school books and posters, is also dotted with Maschine mixers and microphones. It is not uncommon to hear newly-crafted backing tracks or fresh ideas blasting from his room as he perfects every aspect of his wide array of songs. Bradley’s music is rooted in piano—his most comfortable instrument. But slowly, Bradley has spread out to a variety electronic themes as well, even meshing a bit into acoustics. With mixers, recording software, and a keyboard at his fingertips, Bradley is the quintessential picture of a Boston College artist looking to make his way into the music industry—talented, prepared, and most of all, driven.

Though things may seem purely glamorous for a BC musician, Bradley’s path to where he is today was not all sunshine and daisies. Rather, it was a long process of self-discovery.

“For better or for worse, I’ve sort of just found my own way, from my senior year in high school, to choosing a college, making strange decisions my freshman year, and then finding a totally new path I didn’t think I would have taken,” Bradley said, opening up about his journey as an artist.

Bradley grew up in Princeton, NJ, just minutes away from Princeton University. Bradley felt that he always wanted to live and go to school in Boston, despite the grayness that met him on his first visit to the city. Before coming to Boston, Bradley never considered any music-focused schools in the area, solely because he never realized that music was his primary aspiration in life. Though he grew up playing jazz piano and studying music theory, Bradley branched out and started his freshman year rowing for BC’s crew team. But it did not take long for him to realize what his true calling was

Around his sophomore year, Bradley made a few changes to his BC experience. One of them was picking up music again. Bradley himself will admit that he had trouble picking the piano back up, as he was frustrated with how poorly he played at first. But he pressed forward and then taught himself producing. Formerly his student in a recording class, Bradley now works for Jonathan Sage, BC’s audio and event services supervisor. And even though Bradley feels as though BC’s music scene flounders a bit at times, his experience at BC and with Sage was critical to what came next.

“Eventually it got to where it was this one-man type thing,” Bradley said. “I was making all of this stuff, producing it [by myself], et cetera, but I wasn’t really going anywhere with it, ’cause I’m not the greatest singer in the world. I started a band last year called Six Towns. We competed in a few BC competitions, and then that sort of came to an end at the end of the year.”

Still, Bradley never stopped pushing himself within his art form. He worked in New York this summer, freeing up large chunks of time to devote himself to perfecting his music. Rather than work the types of banking internships that bogged down his friends, he worked manageable work hours over the summer, and was able to spend a lot of his time in Manhattan writing his own music. Though he had previously been writing a lot during his time with Six Towns, this time allowed Bradley to evolve both as a writer and a musician before coming back to BC for the fall semester.

In the future, Bradley is opposed to becoming one of those 9 to 5 p.m. cubicle workers. Though he’s certain of this, Bradley admits that he himself doesn’t really know what will become of his music career or what he really wants to do with it.

“My dad has always encouraged music, but I think it’s hard to encourage it as a career,” Bradley said. “There’s a way to do it right, even if there’s an element of wanderlust that’s sort of involved with making your way into being a musician. You gotta face that from a rational point. It’s a tough thing to confront.”

Even though Bradley recognizes this need for rationality, he is certainly not slowing down as the year presses on. His art seems to be defined by a sense of self-navigation, and that sense appears to be calling him both into the wider world and into the recording studio. He has already received show offers, and is finally planning to record some of last summer’s work.

“Everything is planned out, and it’s going to happen very soon,” Bradley said. “Recording is sort of the colder aspect of music. The writing is done, we just have to get in and do it. It’s time to put nose to grindstone and churn some stuff out. That’s where I’m currently at, even if the future is unknown.” Bradley says that he will be publishing a rough cut of his work in the coming weeks—once completed, fans will be able to find his newest work online. If all goes smoothly, it is very possible that Bradley may be the next big name in BC music.