Home » Kaepernick and the Role of the National Anthem in Sports 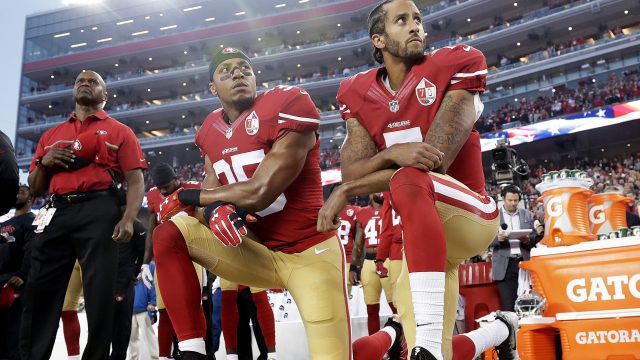 Kaepernick and the Role of the National Anthem in Sports

Colin Kaepernick, quarterback of the San Francisco 49ers, currently finds himself deeply embroiled in perhaps the most controversial national political issue: that of the mistreatment of African-Americans and minorities as a consequence of the fundamentally skewed power structures of the United States. Refusing to stand during the national anthem before a preseason loss to The Green Bay Packers, Kaepernick claims to speak for these subjugated groups.

“I am not going to stand up to show pride in a flag for a country that oppresses black people and people of color,” Kaepernick said in a postgame interview. “To me, this is bigger than football and it would be selfish on my part to look the other way. There are bodies in the street and people getting paid leave and getting away with murder.”

The responses to Kaepernick’s actions have been polarized. Many people praise him as a champion of groups that do not have the power or means to speak for themselves, while others label him an attention-seeking brat. While he clearly has the right to kneel during the national anthem, we must assess whether his actions ought to be condemned or praised.

There is a complex but mutually reinforcing relationship between intense nationalistic fervor and the headstrong spirit of American sports. I often find myself questioning the place of the national anthem at a sporting venue, for the sake of a (relatively) meaningless game. Does it devalue the foundational principles of our country and the efforts of those risking their lives overseas to protect them? Must we fuel the sparring that occurs on the playing field between “opponents” whose only differences are the jerseys they wear? This develops a ritualistic quality to sporting events not entirely different from that observed at a Catholic Mass. With this comes an orthodoxy, an expectation of conformity. Is being patriotic nothing more than fitting an expected set of values and corresponding actions? Perhaps not putting a hand over one’s heart during the national anthem signifies that one is less patriotic than those who do. No one dares to keep a hat on his or her head, and God forbid one refuses to stand. The irony is that the expectation of cooperation, the expectation that there is an appropriate way to be patriotic, undermines the very nationalistic principles (those of religious and expressive freedom) that this cooperation attempts to enforce.

In a Washington Post article from August, Kareem Abdul-Jabbar argues that vehement opposition to Kaepernick’s actions reveals more about the patriotism of the American people than it does the quarterback’s. Abdul-Jabbar argues that athletes express devotion to their nation in different ways, and that they should be respected for doing so. In his view, true patriotism is to praise one’s country when it promotes the Constitutional values it promises to uphold, and to condemn it when it fails to do so. Understanding patriotism in this way recognizes the autonomy of the individual and allows for a multiplicity of “appropriate” ways to express it. After all, soldiers overseas serve to protect the freedom to do just this.

Critics, such as Mike Ditka, approach the Kaepernick controversy from a different angle. They argue that Kaepernick is himself the beneficiary of the very institutional structures that he condemns. Should acting as the spokesperson for a cause necessitate that one at some point ought to have been a subjugated victim? Other theories speculate that Kaepernick’s decision not to stand for the national anthem were personally expedient: a young quarterback down on his luck, trying to garner the popularity to reenter the spotlight and revive a faltering career.

Ultimately, there is no way for anyone to truly know Kaepernick’s intentions, whether they are genuine, and precisely what ends he is trying to serve. But this knowledge is unnecessary for me to condemn his actions. Earlier in this piece, I raised issue with the demonstration of patriotism and nationalistic fervor at sporting events. I can condemn or question this all I want, but to do so would not be productive. The reality is that American sporting events necessarily incorporate a patriotic ethos for the sake of unity and togetherness. Hearing the national anthem inspires teams to act not in self-interest, but for the sake of something more transcendent and meaningful.

The significance of sports as an integral component of American culture not only underlies a tendency toward community and togetherness, but also functions as an agent of healing and perseverance. In the early 20th century, immigrants turned to baseball to temporarily forget the hardships associated with living in a new nation. More recently, thundering applause for President George W. Bush’s first pitch at Yankee Stadium during the 2001 World Series represents an overwhelming desire to dismiss political divisions in the interest of promoting community for a nation devastated by the hatred promoted by global terrorism.

Ultimately, patriotism underlying sports exists as a means of promoting a benign unity, and the playing of the national anthem is an example of a way in which this goal is achieved. Exercising freedom of expression in the specific way that Kaepernick did represents a misunderstanding and defamation of the purpose of sports in the context of American culture and functions to further entrench the very divisions he supposedly condemns. Kaepernick indeed has a patriotic duty to speak out against a government unresponsive or antagonistic to its people, but to do so at a sporting event is not appropriate.