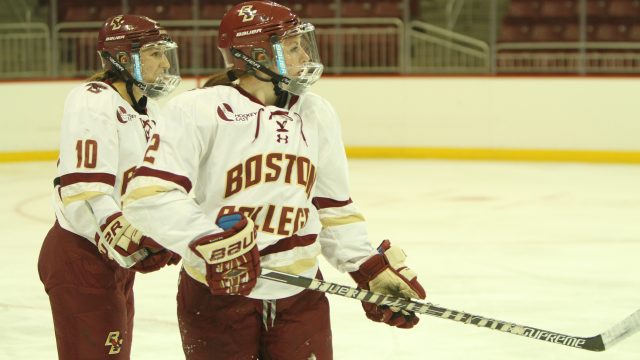 Eagles Can’t Find a Win in Weekend Series Against Duluth

The absence of Boston College women’s hockey’s newly-graduated members was felt deeply in its first two games of the season. The Eagles, who had an impressive 40-1-0 campaign last season, fell short in both of their games against the University of Minnesota, Duluth.

On Saturday, BC (0-1-1) took a beating from the Bulldogs (1-1-0), falling 5-2 after attempting to recover offensively in the third period. The Eagles came out strong against UMD, taking the first shots of the game and going on a successful penalty kill in the beginning of the first period. Right after the penalty kill, however, senior Demi Crossman put one in for the Bulldogs. BC staved off any more goal chances for the Duluth, but also couldn’t get a goal for itself. Late in the period, captain Andie Anastos was checked in the boards and immediately exited the game. She returned to the bench later in street clothes, and her current injury status is unclear.

Almost immediately after the second period began, UMD struck again. The goals started piling on, and the Eagles had nothing to answer for them. All but one of the goals scored by the Bulldogs came from the sticks of seniors.

BC, however, retaliated in the third period with its freshmen. First-year standout Caitrin Lonergan capitalized on a power play and put the Eagles on the board with only six minutes left in the game. The Eagles got into the power-play groove, with Delaney Belinskas notching her first goal of her career. But it was too little, too late, and BC flew back to Chestnut Hill with little to show.

The outcome the night before was more favorable for the Eagles, but BC still did not come up with the win, ultimately settling for a 3-3 tie. The Eagles came out much stronger in their first game of the series, with senior Haley McLean, who seldom played in the previous three seasons, starting the goal-scoring just 17 seconds into the game.

UMD took time to answer back, with Ashleigh Brykaliuk putting one in the net 15 minutes later. BC ramped up the pace, and Lonergan launched the puck to the back of the twine to put the Eagles up again while on the power play.

Both teams adjusted play in the second period, particularly on the defensive side. Neither team could get a shot past goalies Katie Burt and Maddie Rooney. Eventually, UMD got hold of the puck long enough to score its second goal of the night, tying it up once again. The offensive energy fizzled out yet again to end the period, keeping the score at 2-2 until later in the third period.

By the middle of the third period, it appeared that the Eagles would claim their first win of the season. After a goal by BC captain Anastos to set the score at 3-2, the victory seemed secure. With less than 10 minutes left in the game, Toni Ann Miano landed in the penalty box for tripping. This did not read as a fatal error—the Eagles had killed five penalties in the periods prior. But this time, UMD capitalized. Brykaliuk notched one to garner her first hat trick of the season.

The last time BC had entered overtime was during the Frozen Four semifinal, which it had won just 58 seconds in with a goal from star Haley Skarupa. This time, however, the Eagles could not put it away easily. The time expired with the score still 3-3, and BC had its first tie since Feb. 21, 2015.

Though the weekend did not have the outcome BC wanted, the Eagles showed a lot of promise. While UMD relied heavily on its seniors for scoring, BC’s freshmen scored a majority of its goals. Having their program essentially gutted this season, the Eagles played solidly without their six former seniors, including Skarupa and Olympian Alex Carpenter, and had an especially deadly power play. Burt also performed well under the pressure of more shots, which she did not have to deal with last season. If BC continues to get more experience over the season, it will be able to defeat a team like the Bulldogs down the line.