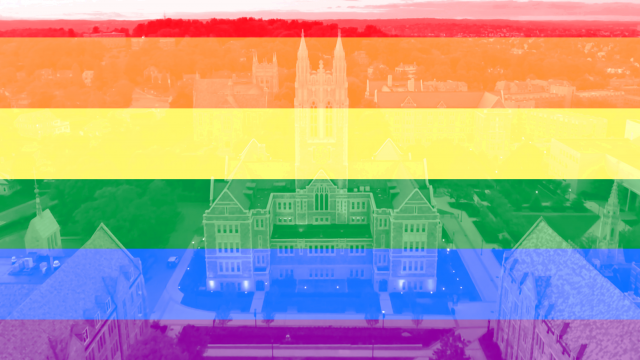 GLC Pride Week is Positive Effort for UGBC and GLC

The first GLC Pride Week, sponsored by the Undergraduate Government of Boston College’s (UGBC) GLBTQ Leadership Council (GLC), will be held next week. Next week’s events come after this past Tuesday’s talk by Rev. Cameron Partridge, an openly transgender priest in the Episcopal church. Both of these programs were made possible by UGBC and serve as good examples of the kind of work it can accomplish, especially during a time of potential frustration, as efforts to create an LGBTQ resource center in past years have not led to any results. Despite these larger proposals’ being stymied, UGBC and GLC are still able to host positive events such as this that help to partly improve the climate on campus.

One positive aspect of Pride Week is the name change from previous years’ similar event, National Coming Out Week. The change in name is a good way to shift emphasis from the idea of coming out to a more general emphasis on LGBTQ pride. Anne Williams, chair of GLC and MCAS ’17, noted that UGBC is hoping to make the event inclusive to a variety of different identities. This is a good rebranding of the week that will hopefully bring about more interest and impact more students. As Williams said, the change in name also moves away from the idea of coming out as central to LGBTQ identity.

The Partridge talk was also a worthwhile event. After the unfortunate cancellation of last year’s Laverne Cox event, which would have brought the high-profile transgender actress to campus for a talk, it is good to see that efforts to bring transgender speakers are continuing. These events further the cause of UGBC, GLC, and LGBTQ students by promoting inclusivity on campus. Partridge’s talk provided an informative and inspiring example of a transgender experience, including a realistic discussion of what it means to come out as transgender. “What would happen if we open ourselves up and decide not to be afraid?” Patridge said, discussing these issues. This example is a good one for students at BC, especially students who might be struggling with their own identities.

It is events such as these that UGBC and GLC should continue to bring to students. As it continues to face larger and more difficult attempts at policy change, these smaller events help to shape the campus climate and bring about the gradual developments that will hopefully lead to larger changes in the future.