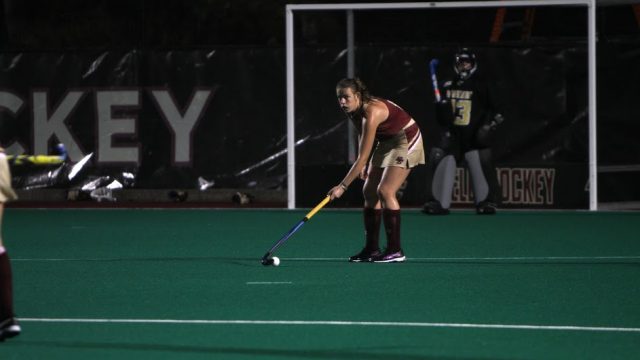 Boston College field hockey entered this weekend with an even record at 7-7, facing one ACC matchup against Wake Forest and one non-conference contest against Providence College. It was a successful weekend for the Eagles, who fought until the very end of a double-overtime victory against the Friars just two days after recording a win against the Demon Deacons.

The Eagles took the field against Providence on Sunday, the day after the ACC announced that they would be the No. 3 team in the upcoming ACC Field Hockey Championship, BC’s highest-ever ranking in the tournament. Perhaps it was this good news that fueled the Eagles through a grueling, 100-minute long contest against the Friars.

Providence (12-5, 4-2 Big East) opened up scoring very early in the game. Two minutes in, Sylvia Miller found herself with possession of the ball along the baseline by Audra Hampsch and BC’s goal. She dribbled down the line, preventing BC defenders from poking the ball away, and tucked a shot into the back of the net for the early 1-0 lead.

With these goals discounted, Providence took a 1-0 lead into halftime. Neither team managed to dominate in the half. Brittany Sheenan, Leah Frome, Kaitie Fink, and Emily McCoy combined for six shots in the half. The Eagles also had six penalty corners in the half. Meanwhile, the Friars finished with four first-half shots (including the goal) and three penalty corners.

The second half saw an uptick in the action. The Friars’ Kali Kilmer tested BC with an early shot, but Hampsch managed it easily. Adrienne Houle got her stick on the ball following a penalty corner, ripping a shot towards the goal, but it bounced off of the post.

BC took advantage of a golden opportunity in the 52nd minute of the game. The Eagles were awarded a penalty corner. Lucy Lytle stuck her stick out as the ball approached her, tipping it past Guilbert into the back of the net for the equalizer.

With the game tied at 1-1, both teams doubled down defensively. Emily McCoy managed another shot, but it ricocheted off of the post. Her sister Eryn McCoy ripped a shot at Guilbert, but the goalkeeper handled it easily. She was also unfazed by an opportunity from Brooke Matherson, making the save to preserve the tie and keep the Friars in the game. Meanwhile, Providence failed to get a single shot off after BC’s goal, although it was awarded two penalty corners at the end of regulation.

The teams headed into the first 15-minute overtime period determined to earn the golden goal and capture a gritty victory. PC recorded the first shot when Houle ripped the ball wide of the goal. Soon after Houle’s shot went wide, Hampsch kept the Eagles in it after saving shots from both Houle and Kilmer. The Eagles struggled to create opportunities in the first overtime period, failing to test Guilbert with a single shot in the period.

The roles reversed in the second overtime period, as the Eagles shut the Friars down, refusing to concede a shot. Meanwhile, BC attacked Guilbert and the Providence defense repeatedly throughout the period. Frederique Haverhals managed two shots early in the period, with Guilbert recording one save and the other shot sailing wide. Eryn McCoy also took a shot, but couldn’t keep the ball on frame. BC created chances for itself with penalty corners throughout the period, but as the seconds ticked away the Eagles just couldn’t find the back of the net. If the second overtime period ended with the score still tied, the teams would go to penalty strokes to determine the winner.

With 52 seconds remaining in the period, Emily McCoy found herself with possession of the ball by the Providence goal. She lured Guilbert out toward her before sending the ball flying towards the right goalpost. Lytle found herself in the right place at the right time, deflecting the ball into the back of the net to seal the last-minute double-overtime victory for the Eagles.

“It took us a little bit to get going in the game,” head coach Kelly Doton told BCEagles.com after the game. “We came out and battled, and the biggest thing is we got the victory.”

The hard-fought, gritty win came just two days after the Eagles defeated ACC opponent Wake Forest (8-7, 0-6 Atlantic Coast). BC won by only one goal in this game, too, but it didn’t come down to the wire this time, as the Eagles fought to a 3-2 victory over the Demon Deacons.

Haverhals scored first to give BC a 1-0 lead halfway through the first half. The Eagles were awarded a penalty corner in the 20th minute. Haverhals tipped the ball in on the left post, sneaking the ball past Wake Forest goalkeeper Isla Bint. The lead didn’t last long for BC, however. Nicola Pluta received the ball to the right of the goal. She fired a shot past Hampsch to equalize the score at 1-1.

Wake Forest continued to test BC throughout the rest of the half. Julie Grashoff and Pluta forced more shots on Hampsch, who handled each shot easily. As the final seconds of the half ticked away, the Eagles managed to score again to carry a 2-1 lead into halftime.

Emily McCoy took a penalty corner and passed it along to Haverhals. Haverhals gathered the ball in and fired a shot past Bint for her second goal of the game.

The first 25 minutes of the second half saw action from both teams, but neither team actually scored until the 66th minute. Matherson passed the ball along to Lytle on the right side of the goal. Lytle fired a shot past Bint to cushion BC’s lead at 3-1.

The cushion goal came up huge in the end, as the Demon Deacons managed to score another goal in the final seconds of the game. Grashoff received the ball from a penalty corner and tucked a shot past Hampsch to bring the score to 3-2 in BC’s favor.

Doton praised her team after the game. “I think overall it was a great team win,” she told BCEagles.com. “Any ACC opponent we face is going to bring it.”

The Eagles enjoyed a successful weekend overall, earning a conference win and then battling to the final seconds of a competitive game against Providence to earn two wins on the weekend.