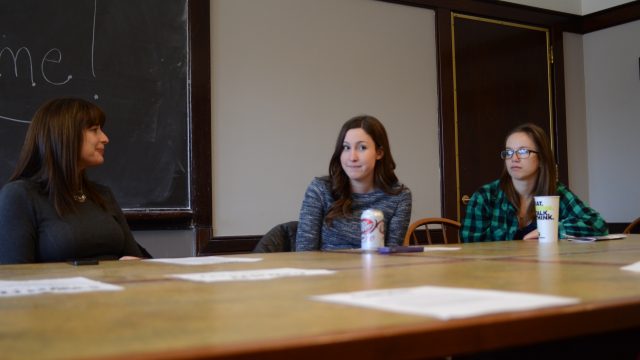 With Thrive, the newest program from the Boston College Women’s Center, sophomore girls have a safe space on campus to talk freely and be part of a specific community. Thrive consists of eight mentoring groups, with two senior mentors and eight sophomore girls in each group.

Before the creation of Thrive, the Women’s Center ran a one-on-one mentorship program, Duo. The center then decided that one-on-one mentoring was not very productive, as counselors could not ensure that each girl was equally benefitting from the program.

Thrive was also created after Ascend, a program led by the Center for Student Formation, changed from a mentorship program for sophomores and became a program for freshmen. Thrive relies on the group mentoring structure of Ascend, which had proven to be successful.

The Women’s Center also saw a need to continue to have a program for sophomore women because it believes sophomore year is still a learning year.

“You feel like you should have everything figured out, but you obviously don’t in a lot of ways,” said Victoria Garcia, a graduate assistant in the Women’s Center. “That’s where a lot of people start feeling lost, whether with their roommates or picking their majors.”

Applications are rolling, in part because the Women’s Center wants to ensure it has a broad pool of women applying, especially with this being the program’s first year. Thrive has been advertised across campus via bulletin boards and social media in order to reach a wider audience of girls. The center has worked to get the word out about the new program in conjunction with other offices on campus.

“I’m really pleased with the number of applicants we have,” Garcia said. “We’re still looking for more because we want to make sure we’re reaching everyone, and we want to find the sophomores who haven’t gotten involved or found their place in the community here.”

“We hope to perpetuate the legacy of giving back to the BC community and always wanting to have these conversations about self and identity.”

—Victoria Garcia, a graduate assistant in the Women’s Center

The Women’s Center is focused on providing these girls with a space where they can branch out, make new connections, and have real conversations. It is important the girls have a place they can talk about what they are passionate about, what it means to have a healthy relationship, or their identities, Garcia said.

“We’re really looking to have meaningful, authentic conversations that maybe you’re not necessarily having with your roommate, or when you’re going out on the weekends,” Garcia said.

The program starts in January with a retreat, during which the girls will have the chance to start bonding and creating a sense of community within their groups.

The mentors recently went on their own retreat, during which they were able to get to know each other better.

“They had the chance to model the vulnerability and authenticity we want sophomores to be able to do in their groups as well,” Garcia said.

The Women’s Center hopes that this will also be a productive way for the sophomores to meet more upperclassmen and get to know more of the BC community.

Ascend formed strong communities and consistently had a great turnout, Garcia said, so she hopes that success will be replicated in Thrive.

The Women’s Center also hopes the freshmen girls in Ascend will be interested in Thrive, or will want to become mentors for the Thrive program in the future. Not only does Thrive want to create a space on campus for sophomore girls, but it wants to encourage the students to give back to their community as mentors in the coming years.

“We hope to perpetuate the legacy of giving back to the BC community and always wanting to have these conversations about self and identity,” Garcia said.