Home » Lamar Jackson Airs It Out for Kodak Black Against BC
Football, Featured Story

Lamar Jackson Airs It Out for Kodak Black Against BC

Week 9 was not kind to Lamar Jackson and No. 7 Louisville. The Cardinals nearly got upset by lowly Virginia, a game which they entered as 34-point favorites, and consequently missed out on the final College Football Playoff spot. Texas A&M took that honor, instead.

To call Louisville’s 52-7 demolition of Boston College in Week 10 a turnaround would be a drastic understatement. Jackson led a refocused squad into Alumni Stadium and scored 38 first-half points as part of his seven-touchdown performance—equaling Eagles quarterback Patrick Towles’ season total entering Saturday’s game. As if that wasn’t sweet enough, the Cardinals learned that the No. 4 Aggies had lost on the road against Mississippi State. Their road to the CFP became that much easier.

And BC’s road to a bowl game got that much harder. With matchups versus Florida State, Connecticut, and Wake Forest left on the docket, head coach Steve Addazio needs two more wins to secure bowl eligibility—and possibly the future of his job, too.

Let’s take a deeper look at a blowout that we’re sure to see highlights from when Jackson’s Heisman campaign comes to a close.

Pompano Beach is a hotbed for unique talent. Not only did Jackson emerge from the Florida coastal city, but so did Dieuson Octave, better known by his stage name, Kodak Black. Octave has gained popularity over the past couple years with his trap hits “Skrt” and “No Flockin’.” After Jackson’s milestone victory at Florida State, the Heisman hopeful gave his former classmate a shout-out, yelling “Free Kodak!” Octave had been sentenced to two months in jail for minor drug charges in September, and Jackson’s advocacy quickly made rounds on the internet.

At the postgame press conference, Jackson said he is looking forward to Lil Kodak’s release, but said he hasn’t contacted him yet. If the rapper was watching his fellow Floridian on Saturday, there is no doubt that he would’ve been impressed.

Jackson torched the Eagles’ ninth-ranked defense for over 100 yards through the air and on the ground, accounting for three touchdowns—all in just the first quarter. The most electric player in the country forced BC’s defense to respect Louisville’s run game, opening up the vertical passing game. Jackson’s nice 69-yard touchdown scramble on the first drive of the game left the Eagles’ secondary ripe for exploitation. The dual-threat sophomore certainly took advantage, adding touchdown throws of 30 and 44 yards before the first 15 minutes were up.

The craziest part? Jackson didn’t even break a sweat on any of his four touchdown passes. During each big play, he patiently waited for the route to develop, had confidence that his receivers would beat the BC defensive backs, and fired darts that hit them in stride.

Jackson is everything you could ask for in a college quarterback. He’s explosive. He’s poised. And he’s not afraid of taking shots downfield or making plays with his legs.

His last touchdown run of 53 yards showcases just what all this hype is about.

The Eagles showed promise on offense against NC State, scoring on a huge play from Jeff Smith and incorporating a trick play when they needed it most. Davon Jones looked like the back of the future, and the defense showed flashes of last year’s unit that forced an abundance of turnovers.

Yes, Louisville’s defense is elite. And yes, it’s hard to motivate your offense to score when trailing by 30+ points. But, no matter how you chalk it up, BC’s offense took a step back on Saturday.

Towles threw too many passes behind receivers, and Darius Wade wasn’t better, either. The offense looked blindsided by the Cardinals’ front seven, which disrupted every aspect of the Eagles’ game plan.

“They do a very good job pressuring,” Towles said. “They’ve got some really kind of complex blitzes. It’s a really good football team, and I can’t give enough credit to them.”

BC recorded just 57 rushing yards on 37 attempts, an average of just 1.5 per rush. Louisville shut down the Eagles’ best playmaker, Jeff Smith, and largely contained tight end Tommy Sweeney, who finished with two catches and a lost fumble. The team was also abysmal on third-down (4-of-16) and fourth-down (0-of-2) conversions.

The lone bright spot came in the third quarter, when Towles rolled out to his right, reversed course, and dumped off a screen pass on the opposite side of the field to Tyler Rouse. The primary punt returner took off in the open space and broke a Cardinal defender’s ankles en route to a 39-yard touchdown, the first of his career.

Rouse’s big-play capabilities have briefly been shown on special teams, but it would be foolish to limit his contributions at just that. The coaching staff would be smart to continue similar screenplays with Rouse in the coming weeks. 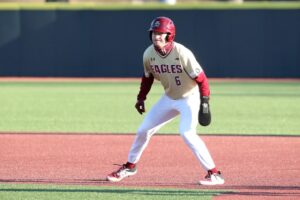