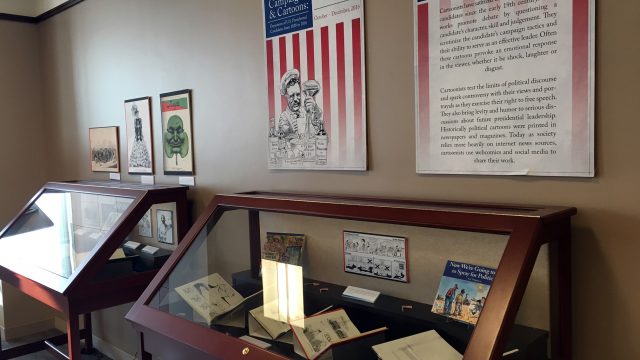 On the back wall of the reading room in O’Neill Library is a display of political cartoons  featuring U.S. presidential candidates from 1828 to 2016, from John Quincy Adams to Hillary Clinton and Donald Trump.

The political cartoon is one of many types of media through which American political ideology has been conveyed in over the years. Through their work, cartoonists present a serious, often controversial topic in a more light-hearted way. But political cartoons often surpass simple slapstick humor—they include biting commentary and satire as a means to comment on or even attack a certain candidate or topic. And, if done correctly, political cartoons have the power to influence and affect popular opinion.

“It’s a part of the process of vetting a candidate, it’s part of discussing politics and it’s a form of free speech for these cartoonists,” said Julia Hughes, a research librarian at Boston College and one of the people responsible for putting on this exhibit.

While showcasing what material O’Neill has to offer, the Campaigns and Cartoons exhibit seeks to educate students on what makes up political satire and how it has progressed.

Not only that, but the hope was that it would spark conversation among students, especially amid a severe and seriously polarized political atmosphere.

“I wanted to do something that would bring some kind of levity to this topic of the presidential election,” Hughes said. “This was such a contentious campaign season and a very serious election.”

Of the many cartoons in the exhibit, a few are strikingly relevant to the 2016 political campaign. One page of comics, which relates to the election of 1948 ,shows a similar kind of controversy.

In 1948, people were certain Thomas E. Dewey would win against President Harry S. Truman, so much so that The Chicago Daily Tribune famously printed the headline “Dewey Defeats Truman” in an early edition of the next day’s paper, which was printed before East Coast states had fully reported their results. Similarly, based on popular polls, people believed that this year Clinton would win the presidency.

The very last cartoon in the exhibit looks dramatically different from the rest. Instead of intricately drawn caricatures on classic yellowed paper, the XKCD cartoon depicts stick figures printed on stark white paper. Hughes decided to include this piece in the the exhibit to show students that there has been a shift in media from paper to the web. Naturally, this shift has come with both positives and negatives.

“I don’t know if there’s been a transformation but there’s been an evolution,” said David Hopkins, an assistant professor of political science at BC. “An evolution in both the way media cover politics and the way citizens consume media.”

Within in the past decade or so, citizens have relied more and more on the internet and social media to get our news, rather than traditional newspapers. On one hand, more people than ever have the opportunity to create and share content of some sort as well as comment and critique. On the other, there has also been an intense increase in the speed and passion of these criticisms and reactions. People can rapidly rally supporters and spread fabrications, allowing for similar thoughts to spread almost instantly. Consequently, audiences and the media often overlook the actual satire and the point of a cartoon entirely. This cultivates a culture that values clickbait and sensationalism rather than conveying the most informative picture of what is actually happening, Hopkins said.

“To some extent, the media is a business,” Hopkins said. “They are in the business of providing service to customers, so they have an incentive to cover what they think the customers what to read or want to see.”

This has been particularly true considering the nature of the media during the supercharged 2016 campaign. There has been increasing focus on the presidency and presidential election, at the expense of other aspects of American politics, and that was especially true this year, Hopkins said. Moving forward, he suspects the media will have no interest in anything other than the Trump administration.

Ultimately, no matter through what medium cartoons are consumed, they will remain an integral part of American political media and will continue to impact popular culture and opinion.

“[Political cartoons] will remain an important way to entertain the electorate and to provide feedback to politicians,” said Jonathan Laurence, another BC professor of political science who has shown support for the exhibit. “Cartoons are an important instrument of press freedom and an outlet for the frustrated.”

politics o'neill library cartoons political cartoons
Even in the Toughest of Times, Ya Always Gotta Believe
So What’s Your Story?