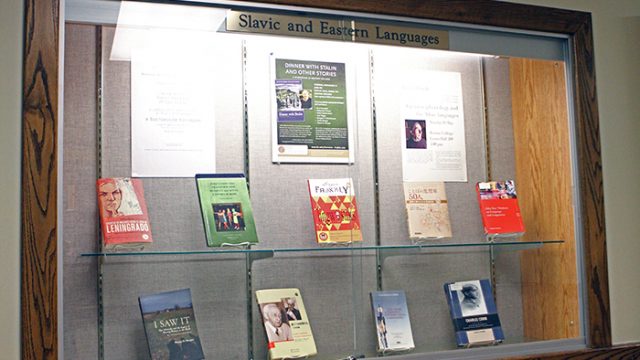 Students at Boston College are busy with major and core requirements and have little, if any, time for electives. Programs that are not popular in the core suffer from this lack of attention and are often overlooked by students. Despite the opportunities and advantages it offers to students in today’s globalized world, Slavic Studies is one of these programs.

The Department of Slavic & Eastern Languages and Literatures is wide ranging and encompasses Slavic, East Asian, and Middle Eastern Studies. Coupled with teaching the languages present in these regions, the department focuses on helping students understand the culture, history and literature. The most overlooked section of the department is the Slavic Studies program. Slavic Studies is the study of the Slavic people, their culture, history, and the languages they speak.

“The Slavs are the largest ethnicity of Europe,” Cynthia Simmons, the undergraduate program director of Slavic studies, said. “You can go from Russia through Eastern Europe into the Balkan Peninsula, and those are all areas where there are ethnic Slavs.”

For students interested in Eastern Europe, courses are offered in both Russian and Bulgarian. The department offers a both a major in Slavic studies and a Russian major and minor.

Since the end of the Cold War, the focus of United States foreign policy has shifted from Russia and the Slavic regions to the Middle East and Asia. Along with this shift in focus, there has also been a shift away from the prioritizing of Slavic civilization in education. With recent developments in foreign policy, specifically the deterioration of U.S.-Russian relations, expertise in the Slavic region is increasingly important.

“None of us could imagine that anyone would consider Vladimir Putin, a former KGB agent, a trustworthy ally,” Simmons said. “Many just don’t understand Russian history and Soviet culture. We need to have a deep understanding of Russia and the Slavs as Russia has its influence over all of Eastern Europe.”

Additionally, to receive a degree a student must have an intermediate knowledge of a Slavic language, which many students just aren’t willing to commit to due to the difficulty in such an undertaking.

Being such a small department does have its benefits. The size of the department creates a familial feel between faculty and students. Elena Lapitsky, who has taught Russian at BC for 15 years, serves Russian tea every Wednesday in the Rat to students that are currently enrolled in Russian or who have taken it before. The event allows studies to interact with their professor and classmates on topics in both Russian and English.

Students that find their way to the department often do so because of a Slavic background or interest in foreign affairs. In the past few years, more and more students are entering the department for  love of Russian literature. Such students are first introduced to Russian literature in high school through the reading of Dostoyevsky and wish to delve into such studies more extensively upon arriving at BC.

“We have our Russian literature survey courses entered as core lit courses,” Simmons said. “So students can study Russian literature and get to know the faculty and they might get more interested that way. For departments that aren’t in the core, that outreach to reach students is difficult.”

Students who graduate with a degree in Slavic Studies or Russian have a wide array of opportunities because of their knowledge of the language and culture. Many students often choose to enter the world of government. Many students interested in this field will pursue a Boren Scholarship, in which the government pays for a student with knowledge of a critical language to study in a country where that language is spoken, with the student then having to serve two years in the National Security Field. Knowledge of Slavic languages also provides outlets into fields besides government including international business or, as Dan Hirlinger, MCAS ’20,  hopes: sports.

“Right now I’d like to get a job in the NHL, maybe scouting for the KHL [Kontinental Hockey League],” Hirlinger said.

So next time you have a spare moment in the Rat, consider going upstairs and checking out the professors that bring Slavic languages to BC. You just might end up with a career halfway across the world.