Home » Previewing BC Basketball 2016-17: What to Expect From Harvard 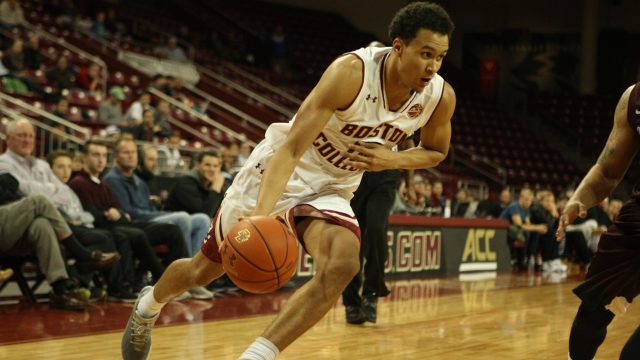 Previewing BC Basketball 2016-17: What to Expect From Harvard

Season three of the Jim Christian era has gotten off to a rocky but promising start with fledgling Boston College men’s basketball going 4-3 in the first seven games of its nonconference schedule. Coming off of an 88-70 victory over Dartmouth (0-6), in which Jerome Robinson tied a career high with 27 points, the Eagles will face Harvard (3-4) on Wednesday night. Local bragging rights are at stake for the Boston-area schools, but more importantly, the game offers BC an opportunity to topple a highly-respected and more talented team for the first time this season.

Last Time They Played: Last November, the Eagles arrived at the high watermark of what would become a supremely disappointing campaign, topping the Crimson, 69-56. The win pushed BC to a 3-0 record, its best start since the 2008-09 season. Freshman Matt Milon, who has since transferred to William & Mary, torched Harvard’s defense with four 3-pointers. Ervins Meznieks added three triples of his own, part of a performance in which the Eagles shot 42 percent from long range against the nation’s 26th-best 3-point defense. Idy Diallo, who has also transferred from the program, provided entertainment for those in attendance, managing to foul out in just six minutes, much to the dismay of Christian. Center Zena Edosomwan had 20 points and nine rebounds for the Crimson, but a dismal 9-for-23 free throw-shooting performance ultimately helped to sink coach Tommy Amaker’s team.

Harvard Scouting Report: After finishing last season with a 14-16 record—Amaker’s first losing season since his first season at Harvard in 2007-08—the Crimson has restocked its roster with a whopping seven new freshmen. A recruiting class ranked 12th in the nation by ESPN’s Recruiting Nation has begun to bear fruit for Amaker.

Chris Lewis, Harvard’s highest-rated freshman—incidentally the son of Mo Lewis, best known for his crushing hit on Drew Bledsoe that led to the beginning of the Tom Brady era in New England—is a 6-foot-9 athletic shot blocker. While he only plays 14 minutes per game, Lewis averages two blocks and blocked four shots in just nine minutes in Harvard’s win over Northeastern on Tuesday. Lewis already shows great instincts for protecting the rim and offers an intimidating presence in the paint.

Two other freshmen have emerged as top offensive players for the Crimson. Bryce Aiken, the starting shooting guard, is the team’s second leading scorer, averaging 11.8 points and 3.5 assists per game. He has struggled mightily shooting the ball thus far into his collegiate career—shooting 29.5 percent from the field and 23.1 percent from beyond the arc—and commits 2.7 turnovers per game. However, Aiken has shown a keen eye for the basket, frequently driving to the rim and drawing contact. He takes 4.7 free throws per game and hits them at an outstanding 92.9 percent clip.

Seth Towns forms the other half of Harvard’s dynamic duo. While not as highly rated as Aiken and Lewis, Towns has actually emerged as the Crimson’s leading scorer, averaging 13.3 points per game. He is a versatile combo forward, capable of playing inside or outside. Towns has shot 47.4 percent from 3-point range this season and also averages five free throw- attempts per game, equally capable setting a screen and popping out for a jumper as he is driving past slower big men to the rim. With 1.9 assists and 1.4 steals per game, indicating his ability to seamlessly integrate within the team fabric, and a deft pair of hands, Towns has shown himself to be a much better all-around weapon than Amaker had anticipated during the recruiting cycle.

As much as Harvard’s youngsters have played a key role—six of the nine players averaging at least 14 minutes per game are freshmen—any discussion of the Crimson’s offense starts with senior point guard Siyani Chambers. Averaging 9.2 points, 7.3 assists per game and shooting 44.4 percent from 3-point range, Chambers is the engine that powers Harvard. Adept at the subtle nuances of pick-and-roll play, as well as every set in Amaker’s playbook, he lines his teammates up in the right spots and expertly puts them in position to score. Via kenpom.com, Chambers ranks fourth in the nation in assist rate, defined as the percentage of his team’s baskets that a player assists on while he’s on the court.

Alongside Towns and Aiken, sophomore sharpshooter Corey Johnson benefits the most from Chambers’ court vision. Johnson is shooting 52.2 percent from 3-point range this season—he made 7-of-10 shots in the victory against Northeastern—and has attempted just one two-point field goal all season.

As a whole, Harvard favors an offensive strategy designed around penetration and perimeter shooting. The Crimson make 37.5 percent of its 3-pointers and rank 41st in the country in 3-point shooting frequency. They focus on ball movement, ensuring that the man who shoots is wide open, assisting on over 70 percent of their made baskets, third-best in the country.

Additionally, its offense has been aided by a large improvement in free throw-shooting. After shooting a paltry 59.1 percent from the charity stripe last season, the Crimson are shooting 75.2 percent this season, led by Aiken’s stellar effort.

Amaker has greatly sped up his offense this season, with Harvard shaving 2.5 seconds off of its average offensive possession from last season. While that may be to the advantage of some of his athletic freshmen, it has led to some problems, as the Crimson have the 330th-ranked turnover rate in Division I. Chambers is usually careful with the ball, but he handles it with such frequency that some turnovers are inevitable. Aiken and Towns also contribute to this problem.

Defensively, Harvard plays a physical man-to-man defense, one of Amaker’s coaching hallmarks. However, the Crimson often plays conservatively. As a result, the Crimson rarely forces turnovers, ranking 317th in defensive turnover rate. This deficiency, coupled with a bit of an issue in corralling rebounds, has caused it to defend a lot of extra possessions, which sometimes causes it to wear down near the end of games.

Harvard closes out well to the 3-point line, allowing opponents to shoot just 29 percent from beyond the arc, but has had some trouble protecting the paint. Though they don’t allow a particularly high shooting percentage around the rim, with Edosomwan and Lewis manning the middle, the Crimson have frequently fouled opponents driving to the basket.

Harvard has the 12th-worst opponent’s free throw-rate in Division I basketball. After his team ranked in the top-100 in this category last season, Amaker needs to ensure his young players learn the critical importance of playing without fouling. Otherwise, their solid team defense will be for naught, as opponents feast on free throws.

1.) Get to the Free Throw Line—After ranking 350th in free throw-rate last season, behind the increased aggression of Robinson, the Eagles’ offense now ranks 132nd in free throw- rate. Facing a Harvard defense that struggles to defend without fouling, BC must commit to attacking the basket and drawing fouls. Harvard’s physical defense will not allow the Eagles to finesse their way to victory. Instead, the players, particularly the guards, must enter the game with a mindset to constantly attack and keep the Crimson defenders on their heels, using its aggressiveness against it to earn easy points.

2.) Win the 3-Point Battle—Similar to the Crimson, the Eagles also shoot 3s well, making 40 percent of their long range attempts, and defend the 3-point line ferociously, as opponents hit just 27.7 percent of their attempts from downtown. With both teams featuring four regulars shooting at least 40 percent on 3s, this game will likely come down to which team can crack the opposition’s perimeter defense. For the Eagles, that means keeping a body on Johnson at all times and rushing out to Towns when he gets pick-and-pop 3-point looks. On the other end of the court, ball movement will be crucial. Finding players like Robinson and Ty Graves for catch-and-shoot 3s will help BC be efficient from beyond the arc.

3.) Win the Turnover Battle—Harvard and BC share similar turnover profiles. Neither team forces many and both teams are extremely prone to giveaways, with young guards getting acclimated to the college game. To secure a victory, the Eagles must capitalize on Harvard’s sloppiness and minimize their own. In particular, Graves and Ky Bowman, the freshman point guard tandem, must focus on simple, secure passes in place of some of the more ambitious reads they’ve been attempting to make in recent games.