Home » Jerseys of John Bagley and Dana Barros Will be Retired 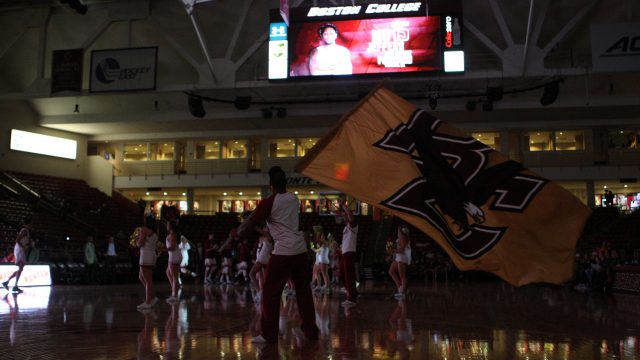 Jerseys of John Bagley and Dana Barros Will be Retired

Yesterday, Boston College men’s basketball upset North Carolina State, earning its second ACC victory of the year. The Eagles were propelled by the backcourt duo of Jerome Robinson and Ky Bowman, who totaled 43 points combined. Early into conference action, the North Carolina natives have established themselves as the forefront of the program—but stellar guard play is something of a tradition at BC. And on Thursday, BC Athletics announced that two of its finest will be immortalized in Eagles’ history.

The jerseys of former guards John Bagley and Dana Barros will be retired during halftime of BC’s game versus Virginia Tech on Feb. 25.

“It was important for us as a department to be able to highlight our rich history and tradition on the hardwood, and Dana and John are two key components to our success,” Director of Athletics Brad Bates said.

Bagley played for the Eagles for three seasons (1979-82). He was a two-time All-Big East performer. After posting 20.4 points per game and leading BC to the Sweet Sixteen in his sophomore year, the Eagles’ 14th all-time leading scorer earned Big East Player of the Year honors. Bagley was the first player in program history to receive the accolade.

In his final year with the Eagles, Bagley upped his game, recording 21.1 points per game, and ultimately led BC to its second Elite Eight appearance. Piloting two March Madness runs, Bagley is the Eagles’ second all-time leading NCAA Tournament scorer with 137 points.

Following the 1981-82 season, he left for the NBA. Bagley was selected 12th overall by the Cleveland Cavaliers. He spent 11 seasons in the league with Cleveland, New Jersey, Boston, and Atlanta.

A few years after Bagley turned professional, Barros took over as the Eagles’ floor general. Playing four seasons (1985-89) for BC, Barros finished his time at the Heights as the school’s first player to eclipse the 2,000-point mark and third all-time leading scorer.

Barros was a three-time All-Big East player. He was named the Big East Rookie of the Year following the 1985-86 season, in which he averaged 13.7 points per game. Often, the 5-foot-11 guard dominated the box score, tallying 30-plus points 18 times at BC—a mark that ties the school’s record.

Upon graduation, he declared for the 1989 NBA Draft. The Seattle SuperSonics took Barros 16th overall. He played 13 years in the league for Seattle, Philadelphia, Boston, and Detroit. While his numbers were down from college, he showed signs of superstar talent. In the 1994-95 season, Barros put up 20.6 points, 7.3 assists, and 3.3 rebounds per game with the Sixers.

But, as a Boston native, his college playing days served as the pinnacle of his basketball career.

“BC gave me four of the best years of my life,” Barros said. “I am blessed and honored to have my jersey retired at a place that I call home.”

Although Bagley and Barros played long before head coach Jim Christian’s time in Chestnut Hill, their influence on the program remains.

“Both Dana and John achieved so much while they were here,” Christian said. “What they did for this program back then, and what they continue to mean to this program now will be remembered forever.”

Maybe Robinson and Bowman have been taking notes. At this rate, they too could find their names in the rafters someday.