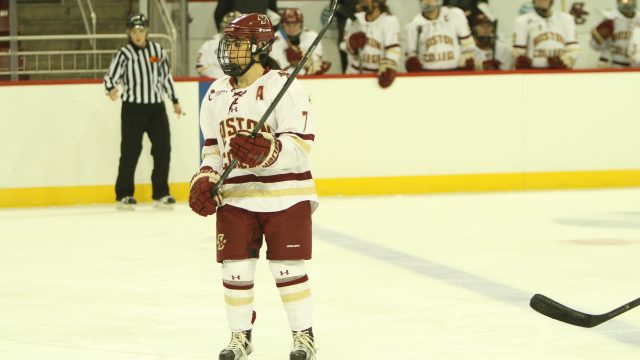 Boston College women’s hockey extended its unbeaten streak to 11 games, the second-longest streak in the country, with a sweep of Merrimack College over the weekend.

Goaltender Katie Burt had another stellar weekend, saving 12 shots en route to her fourth shutout of the season and the 27th of her career. The next day she was arguably even better, allowing one goal but posting 25 saves in her 79th career win. One more win will tie her for the all-time program record of 80 held by Molly Schaus. Burt is currently on pace to surpass the NCAA record of 114 wins, set in 2013 by Minnesota goaltender Noora Raty.

BC got on the board early on Saturday thanks to a first-period strike from Anastos. It was originally called a no-goal before a video review overturned the decision, giving the senior her 11th score of the season. The Eagles tacked on another goal before the period was finished. Delaney Belinskas fired a couple shots from close range that Warriors goaltender Samantha Ridgewell deflected in the direction of Haley McLean. The senior forward cleaned up the mess near the net to hand BC a 2-0 lead.

Paige Voight chipped into the Eagles’ lead in the second period, sneaking one past Burt with a minute left in the second period. It looked as if Merrimack might notch an equalizer when it earned a power play midway through the third period. But Kali Flanagan stole the puck in Warrior territory and found Kenzie Kent streaking down the wing. Kent’s first shot was blocked, but she lasered home the deflection to turn a penalty kill into a game-sealing goal.

In the opening game on Friday, BC experienced a scare when, after 57 minutes of play, the team had nothing to show for its lopsided shot advantage. The Eagles finished with a dominant 38-12 edge in shooting, yet the game remained scoreless until the waning minutes. Finally, Anastos let head coach Katie Crowley breathe out a sigh of relief when she smacked a one-timer from the faceoff circle off a backwards pass from Makenna Newkirk, beating netminder Lea-Kristine Demers high on her blocker side.

The 11-game undefeated streak is the fourth-longest in program history. With Alex Carpenter and Haley Skarupa gone, Anastos has stepped up as one of the true leaders on this squad. BC is rolling now, and it appears as if few teams are going to stop it anytime soon. 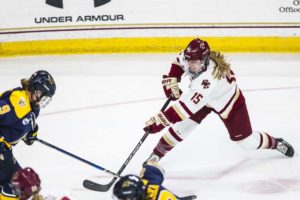