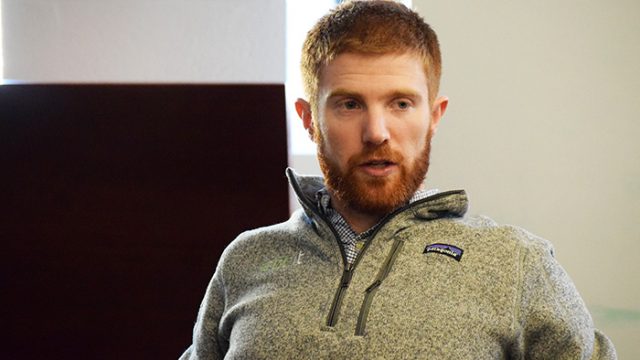 Many people try to find a balance between work and life. But according to Tom Coburn, it’s impossible. The digital marketing startup he founded, Jebbit, runs his life, but in a good way.

Speaking at the most recent Lunch with an Entrepreneur event, sponsored by the Shea Center for Entrepreneurship, Coburn shared his story of starting as a biology and theology double-major on the pre-med track to ending up as the CEO of a Boston-area startup.

Coburn would have graduated in 2013, but he chose to leave Boston College three months before his expected graduation.

“From my way of looking at it, it wasn’t dropping out,” he said. “If the company made it, great, I would keep doing it. If the company totally tanked, I’m just back at school. My friends thought it was a risk.”

Upon entering BC, Coburn was determined to enter medical school and become a doctor like his uncle and grandfather. Initially, Coburn intended to earn money in preparation for medical school. Coburn’s career outlook took a drastic turn during his college years.

During his freshman year, he and his roommates attended the Student Involvement Fair where they learned about BC Venture Capital (BCVC). BCVC, now a program under the Shea Center, hosted an annual venture competition with a $10,000 grand prize. Coburn and his friends made it a goal to win the competition by senior year.

The three roommates formed a team and spent four hours each week on the fifth floor of O’Neill Library developing their business idea. Before deciding on the ad-tech idea that has since evolved into Jebbit, the team tested out four other ideas, some of which were science-based.

Coburn came up with Jebbit’s product while watching a TV show on Hulu at the airport. He realized that the way companies advertized themselves online was ineffective. Inspired, Coburn pitched the idea to his team of developing a new ad marketing solution.

During Coburn’s sophomore year, his team achieved its goal two years earlier than expected when their submission, an early version of Jebbit, won first place. Feeling optimistic after their triumph, the team participated in Highland Capital’s [email protected] program the following summer. Coburn and his roommates received funding, mentorship, and resources such as office space to work on Jebbit. At the end of the summer, the company had signed only one client. When the three co-founders returned to campus in the fall, Coburn recruited freshman interns for Jebbit in the hopes of growing the company’s exposure.

The initial idea was to attach questions with the ads so viewers would need to pay attention to the video. This pitch evolved to include a monetary incentive. Viewers would be paid a small amount for each question answered. After facing difficulties acquiring clients, Jebbit shifted its focus and changed its pitch by rebranding itself as a marketing tool companies could use to target college students.

Using BC students as a sample, the interns promoted the monetary incentive on campus. Jebbit launched its website in the fall of 2011. Within 43 seconds of the launch, 150 students signed up, causing the website to crash. The website developer forgot to integrate the site with PayPal, so Coburn had to withdraw $3,000 in $20 bills. After answering the questions on Jebbit, student participants were asked where they were on-campus and interns would hand-deliver the $20 cash incentive.

“All of a sudden, the next day, it was all the buzz across campus,” Coburn said. “Students from other schools started emailing us being like my friends at BC told about this Jebbit thing. When are you going to launch it at my school?”

Before he left BC, Jebbit had received $500,000 from investors and Coburn had already been accepted to Tufts University School of Medicine. Coburn felt miserable during his senior year as he struggled to balance promoting Jebbit, achieving good grades in his pre-med classes, and spending time with his friends. In his opinion, taking a year off from school would allow him to dedicate his time to Jebbit. At the time, it was unknown whether Jebbit would be a success.

Four years later, Coburn does not regret his decision. “What’s going to make me excited to get up every day?” he asked himself.

Coburn emphasized the importance that resilience, resolve, initiative, and optimism play in success in startups.

Today, Coburn is named on Forbes 30 Under 30. He and his eighth-grade science teacher founded Enjoy Life Leadership Education, which hosts a week-long summer leadership academy. Coburn also co-founded Soaring Startup Circle, which gives BC students an opportunity to work on their business ideas.

“This experience is a what-you-put-in-is-what-you-get-out type of thing,” Coburn said.