Brad Bates to Step Down as Boston College Director of Athletics

After five years of tumult in Boston College athletics, Eagles fans—students and alumni alike—have demanded change. Now, they have it.

On Friday, University President Rev. William P. Leahy, S.J. announced that William V. Campbell Director of Athletics Brad Bates will step down at the end of the year. His resignation concludes a tenure that began on Oct. 9, 2012 following the abrupt retirement of former AD Gene DeFilippo. Bates was in the final year of a five-year contract, and sources had connected Bates to openings at the University of Missouri and San Diego State University in fall 2016. Sources to The Heights confirmed that a board executive committee of the Board of Trustees met last week to discuss Bates’s future. His successor has yet to be announced.

Under Bates, BC has kept its commitment to having the highest number of varsity teams in the Atlantic Coast Conference while holding an elite level of excellence in the classroom. BC has maintained its ranking among Division I’s elite in terms of graduation rate during Bates’s tenure, ranking fifth in the 2015-16.

Additionally, under Bates, BC Athletics has announced the construction of an indoor practice facility for football, as well as the beginning of the Brighton Athletics Complex for baseball, softball, and club/intramural sports. With the demolition of Edmond’s Hall, BC Athletics also unveiled a plan to replace the Flynn Recreation Complex. None of these projects have broken ground as of publication.

Bates’s plan for the Plex replacement faced immense scrutiny from former swim and dive head coach Tom Groden, when it was revealed that the new structure would not have ceilings high enough to support a diving board. Groden questioned whether Bates supported his program, and said that he believed swimming and several programs would be cut—Bates, however, has denied this. Groden stepped down at the end of 2016.

Several non-profit sports have also thrived in recent years under Bates. Men’s soccer reached the Elite Eight in 2015, tied for its highest finish. In 2016, baseball made it to the NCAA Super Regionals, its first trip to a Super Regional and the program’s best performance since reaching the College World Series in 1967. Most notably, women’s hockey has thrived under head coach Katie Crowley. The Eagles have won three Beanpots, two Hockey East titles, and made it to three Frozen Fours, including a 2015-16 season that saw the team fall in its first national championship game after a 40-0 start.

Bates fired two DeFilippo hires: football head coach Frank Spaziani and men’s basketball head coach Steve Donahue. Though he fired Spaziani just 24 hours after a 2-10 season in 2012, Bates was criticized for his handling of Donahue’s dismissal. Bates gave Donahue a one-year extension through 2017, four years into a six-year deal, during the 2013-14 season, according to The Boston Globe. Multiple reports stated that Donahue would be safe following an 8-24 year in 2013-14, yet he was fired a mere four days later.

In his place, Bates hired Steve Addazio and Jim Christian to those respective positions. Under Addazio, football has gone 24-27, with a 10-22 record in ACC play. Though the Eagles have made three bowl games in his four-year tenure—including BC’s first bowl win since 2007—Addazio’s offenses have consistently been at the bottom of the national standings. After his first two years—7-6 campaigns that ended in bowl losses—Bates extended Addazio through the 2020 season. As of publication, Christian is 29-62, with a mere 6-44 record in ACC play. After last season’s 7-25 campaign, Bates added a one-year extension to Christian’s contract to run through the 2019-20 season.

With Bates at the helm, BC suffered through arguably the worst season in the history of major-conference sports. Football and men’s basketball combined to go winless in ACC play (0-8 football; 0-18 men’s basketball). BC received national ridicule as the first program since the 1976-77 Texas Christian Horned Frogs to go winless in both major sports. BC is the first Power Five Conference school to go winless in both major sports since the 1943-44 Georgia Bulldogs, who only played five games that season because of World War II.

A graduate of the University of Michigan, where he earned a football scholarship as a defensive back under legendary head coach Bo Schembechler, Bates served in several capacities as a senior associate AD at Vanderbilt University. He earned a master’s degree in education from Vanderbilt, before becoming director of athletics at Ohio’s Miami University. Under his leadership, the RedHawks won conference championships in 14 of their 18 varsity sports. In particular, Miami football won two Mid-American Conference titles (2003 and 2010) and men’s hockey reached two Frozen Fours (2009 and 2010). He also helped to raise money to build Goggin Ice Center in 2006. 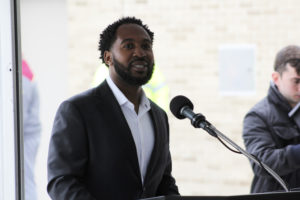 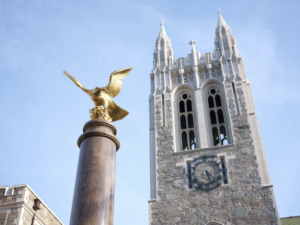