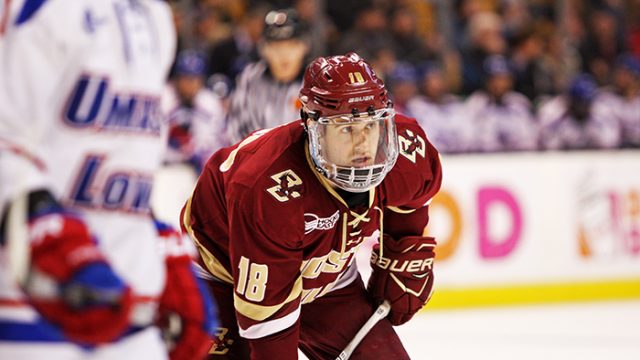 For the ninth time in the last two years, the allure of the NHL couldn’t keep a Boston College men’s hockey underclassman away.

On Sunday evening, the Ottawa Senators announced the signing of Colin White. After a contract dispute, the sophomore center will report to the Senators’ AHL affiliate in Binghamton on an amateur tryout agreement. He will likely debut for Binghamton on Wednesday against the Syracuse Crunch.

“We are excited to see Colin make the next step in his development in turning professional after a great college career,” said Ottawa general manager Pierre Dorion in a statement by the team. “We have spoken to Colin and his advisors at length and we are all in agreement that getting him on the ice to play games in the AHL is what is best for his growth at this moment. While our ongoing contract discussions are moving in a positive direction, we all know there is a small window left this season for Colin to gain professional experience.”

White was the 21st overall pick of the 2015 NHL Entry Draft by the Senators as a member of the United States National Team Development Program. He broke out with a stellar freshman campaign, notching 19 goals and 24 assists in 37 games. His 43 points ranked second on the team during BC’s 2015-16 Frozen Four run, trailing only Ryan Fitzgerald.

Instead of departing for the Senators after last season, White returned for his sophomore season in 2016-17. But his second campaign didn’t match up to the Hobey Baker Award expectations that had been set for him. White dropped to 33 points—16 goals and 17 assists in 35 games. White’s sophomore campaign was abbreviated by lingering upper-body injuries, as well as a strong performance for the United States in the 2017 IIHF World Junior Championship. The Americans won gold as White scored seven goals in seven games.