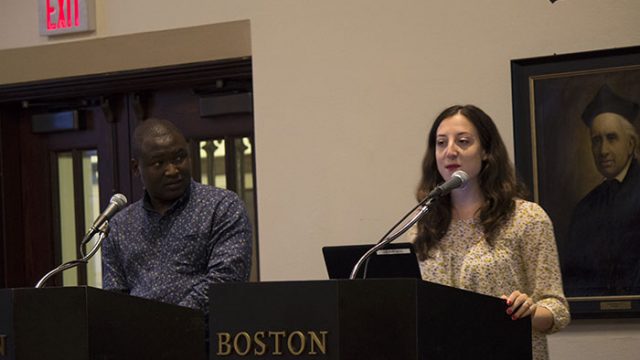 Kennedy and Jessica Odede have a love story that is not so classic. The couple met while in Kibera, a slum in Nairobi, Kenya, through a service program. The Odedes eventually got married and became cofounders of the organization Shining Hope for Communities (SHOFCO).

As part of the Brennan Symposium, through the Winston Center for Leadership and Ethics, the Odedes spoke about the founding and growth of their organization.

Kennedy has been named a Forbes 30 Under 30 Social Entrepreneur, won a Muhammad Ali Humanitarian Award, and is a World Economic Forum Young Global Leader. He attended Wesleyan University on a full scholarship, where he now serves on the board of trustees. Jessica also attended Wesleyan and is the youngest graduate to receive the Distinguished Alumni Award. She was named “America’s Top World Changer 25 and Under,” won the Do Something Award in 2010, and received the Echoing Green Fellowship.

Kibera is about the size of Central Park and is home to between 500,000-1,000,000 people living in poverty. Kennedy’s parents moved from the countryside of Kenya to Nairobi with the hope of being able to find better jobs and a better life with it. Jobs were hard to come by and his parents were forced to make a life in Kibera, where Kennedy was born.

Kennedy explained by the time he was 10 years old, his father had still not been able to find a job that would pay enough to bring them out of poverty. His father had turned to alcohol and begun to abuse his mother. His family did not have the funds to support him, and his home life was miserable, because of his he ran away and lived on the streets. While he was homeless, he became hopeless.

“It was while I was living on the street that I realized that the world is divided between those who have and those who do not have,” he said.

He saw others living lives full of privilege and became angry at the inequity in society.

“A movement comes when you push harder and say enough is enough.”

At the age of 15, Kennedy was given a book written by Dr. Martin Luther King Jr. that changed his life. He did not attend school and taught himself to read while living on the streets of Kibera. He was inspired by King’s writing to take his anger and resentment that he felt toward the inequality he and so many others face and use it to make change.

Kennedy bought a $0.20 soccer ball and began his movement.

“A movement comes when you push harder and say enough is enough,” he said.

Kennedy began a community soccer team, which branched out into many different community programs, such as theatre, education about economic opportunity, and teaching about gender-based violence in an attempt to stop it. These programs were the beginning of SHOFCO.

During her junior year of college, Jessica, born in Denver, decided she wanted to experience a part of the world completely different from what she had seen so far. She decided on Kenya and contacted Kennedy to ask to be a part of his program and if she could live with his family during her semester abroad. At first Kennedy refused, but Jessica was determined and solidified her plans to travel to Kenya.

While in Kibera she realized the blessings and privileges that she had lived with her entire life and never valued. Jessica was the first outsider ever to live in Kibera for an extended period of time. Neighbors would come knocking on the door everyday when Jessica first arrived to see if she was still alive.

Jessica fell in love with Kennedy and with the work they were doing during her initial stay in Kibera. When her semester ended Jessica returned to Wesleyan and with her help, Kennedy won a full scholarship and began his freshman year at Wesleyan the next fall.

After his freshman and her senior year, Kennedy and Jessica returned to Kibera, continued their work with SHOFCO, and opened the Kibera School for Girls. They believe that the change that is needed in Kibera starts with young female education. Kennedy went on to graduate with honors and was the speaker at his own commencement.

Since graduating, Kennedy and Jessica have moved back to Kibera, where they live primarily.  Along with the school in Kibera, SHOFCO has a multitude of projects and initiatives helping people. They have a health clinic that served over 100,000 individuals last year. SHOFCO has brought clean water to Kibera, provides education, especially for women, on how to start their own small businesses, and opened libraries. Recently, they have began to expand their work to other poor areas of Kenya, like Mathare.

This year will bring the first graduating class of the school in Kibera and the girls are going to continue their education not only across Kenya, but across the world. SHOFCO wants to empower the community and give them the tools to make the changes they want to see.