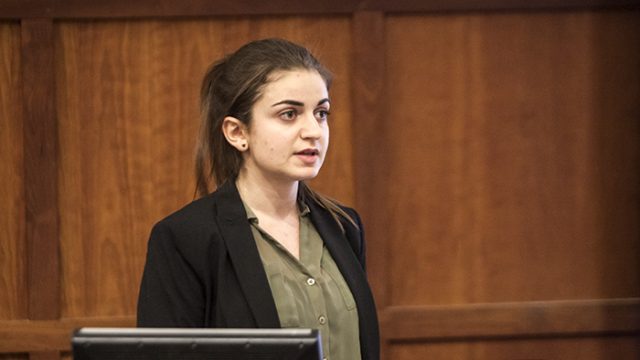 Layla Aboukhater, MCAS ’18, was in math class when she heard the first bombs go off in Aleppo. In an event on Tuesday night sponsored by the Civic Engagement Committee and Boston College Libraries, Aboukhater spoke to students about her story of fleeing from war-torn Syria and the role the media has played in misrepresenting the crisis there.

Aboukhater gave a brief history of the war, delving into the high tension and polarization between the Sunni and Shia people.

“In Syria, the mindset tends be that you’re either with your people or against your people,” she said. “There’s no in between.”

Aboukhater began the story with Frans Van der Lugt, a Dutch Jesuit priest who moved to Syria in 1966. He was interested in the reconciliation of different religions.

He took on two initiatives, one being “Al Ard,” which means “the land,” and “Al Masir,” which means “the path.” To uphold “Al Ard,” he started a community center and farm in 1980 just outside of the city of Homs, Syria. To uphold “Al Masir,” he led a walk that allowed the new generations of Syria to connect with the soul of their people and country.

Aleppo is the economic capital of Syria and one of the oldest inhabited cities in the world. On one slide of her presentation, Aboukhater displayed a beautiful photo of Syria with a church neighboring a mosque, and explained that Syria used to be a multiethnic community coexisting. The next photo displayed Syria today, in ruins, with children playing on top of a military tank. This became the new troubling norm for many Syrians.

“We would go out to party and pass military checkpoints in our clubbing clothes,” she said. “We would go weeks without having running water, even to shower.”

“I was sitting in math class when I heard the bombs go off. This is when I realized the war had reached Aleppo.”

Aboukhater addressed the factors that led to the crisis, including the competition for natural gas, political corruption, martial law, and the growing tension between Sunni and Shia. Syria also faced a decline in education, an increase in poverty, and high reproduction rates.

“When the Arab Spring started, we had worry of how those internal factors would turn out,” she said. “Many people thought that whatever will be done to replace a corrupt system will be twice as corrupt.”

Between January and June of 2011, the government dominated by the Alawite sect and made some concessions to the majority Sunni. In February 2012, there was the first bombing in Aleppo. Two car bombs went off leaving 28 dead.

“I was sitting in math class when I heard the bombs go off,” she said. “This is when I realized the war had reached Aleppo.”

Joined by her parents and her siblings, Matthew and Jude Aboukhater, both MCAS ’20, she left her home in Syria in the midst of her college application season.

One of the greatest themes of the discussion, however, was the issue of the media using misleading headlines and filtering the news they show their audiences based on what will gain viewership, as well as “fake news.”

She told the audience about the Netflix original documentary that recently won an Oscar about the Syrian first responders called The White Helmets. Netflix describes the documentary as indomitable first responders risking their lives to rescue victims from the rubble, but she said that they would only act in front of the camera and did not truly help civilians. There is even a photo of some of the White Helmets taking a selfie with the terrorists, she said.

When Van der Lugt was murdered by terrorists in April 2014, Aboukhater said the media did not choose to highlight his story

“I am motivated by the daily continuous suffering of my people,” she said. 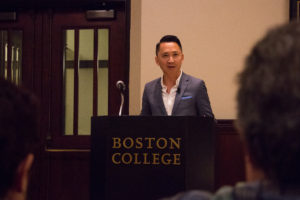 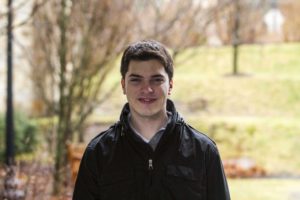